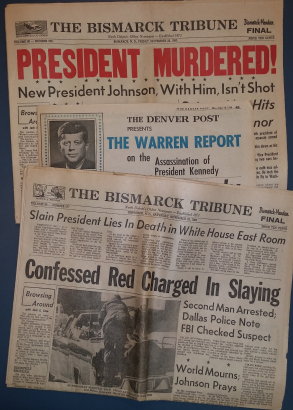 Ask just about anyone who was alive on November 22, 1963, what they were doing when they found out President John F. Kennedy was assassinated and they'll almost certainly recount that day in incredible detail. And if you ask those same people to show you the next day's newspaper, there's a good chance that they've still got it tucked away in a drawer or box somewhere.

It's not a great stretch to say that Kennedy assassination newspapers are amongst the most saved, and most valued, newspapers of the 20th Century. Unfortunately, just because something's valued doesn't necessarily mean that it's also valuable.

There's a well-meaning, but quite inaccurate, perception that JFK assassination newspapers are high-value items that can never be thrown away under any circumstances. That's why libraries and museums across the country are regularly contacted by thoughtful citizens who are looking to donate copies of their, or their recently deceased relatives', JFK paper.

While the urge to support local libraries is definitely appreciated, the vast majority of newspapers, including November 22, 1963, are not something that your local library will be placing in its collection.

The biggest problem with Kennedy papers is the simple rule of supply and demand. Because so many people kept these papers, there is a plentiful supply that collectors can tap into which makes their monetary value very low. (There are a few exceptions to this rule, such as afternoon editions of the Dallas newspapers and some "extra" editions that were printed the day of the assassination.)

From a collection standpoint, most libraries already have microfilmed copies of the paper that are well-suited for research purposes. DPL, for example, has microfilm of the Denver Post, Rocky Mountain News, and New York Times, that include November 22, 1963. We also offer access to the New York Times Historical database, which includes electronic copies of articles from the paper of record.

Because newsprint becomes very brittle after just a few years, not many libraries keep actual hard copies of newspapers in their open collections. Here at DPL, we have a large collection of print newspapers but limit their use to very specific occasions.

In short, most libraries neither want nor need additional copies of any newspaper.

That said, JFK assassination papers definitely qualify as valuable family artifacts and conversation pieces. For anyone who wants to share their memories of that fateful day with children and grandchildren, JFK papers are an invaluable tool, but they do need a bit of tender, loving care.

Newspaper print is a notoriously delicate and temporary medium for transporting information. After all, the lifespan of a daily newspaper is about 24 hours, not 52 years. There are, however, a few techniques for keeping your historic papers in as good a shape as possible:

Historic newspapers give families and researchers an insightful look into the social context of the events that have shaped our world and should be carefully cared for to ensure their use for future generations.

A great write for all to see. We will never forget that day especially when I was only 6 years old. Remember the teacher telling us to go home. Then of course the TV's were blaring away. We can only hope this never happens again. May God Bless Our President John Fitzgerald Kennedy for all he stood for. Amen

Thanks for adding a bit of perspective, Tygeign!

I have 7 complete newspapers from JFK assasination of JFK they range from the the Houston Chronicle to the Houston Press and my Ex had these and wants me to help him sell them cause he is ill and needs the money! The whole paper is in good shape and I’m really at a loss on what to do with them my number is 512-636-5949. My name is Mary

Hi Mary - I'm sorry to hear about your ex's situation. I'm also sorry to say that it's unlikely he'll find a buyer willing to pay much for these items. As the article indicates, there are simply too many of these papers still floating around for almost any of them to have any sort of financial value.

Do you still have these?

Hi. My name is Rebeka. I DID have a JFK Article (A Rochester Democratic & Chronicle Article) and it was in a tote at my husband's uncle's house and when it came time for us to get ALL OF OUR STUFF including the JFK ARTICLE AND ANTIQUE GAMES.... and everything else that we had bought...
HIS UNCLE STOLE... LITERALLY STOLE ALL OF OUR STUFF THAT WE HAD GAINED since we got back from helping our son and his wife tht was having a high risk pregnancy... OUR SON AND HIS WIFE STOLE OUR STUFF AS WELL... SO THIS WAS THE 2ND TIME that this happened to us!! HIS UNCLE MARC KNEW ABOUT WHAT OUR SON HAD DONE TO US AS WELL & HIM N HIS GIRLFRIEND DOROTHY STILL DID THIS TO US!! To top ALL of this off, MY HUSBAND AND I ARE BOTH DISABLED!!
So, how much do you want for your JFK ARTICLE?! And is it the Original Article from the city and state where JFK DIED?! I have a minimal income so plz be Fair...!!!

I have a JFK article from the Daily News I'm looking to move.