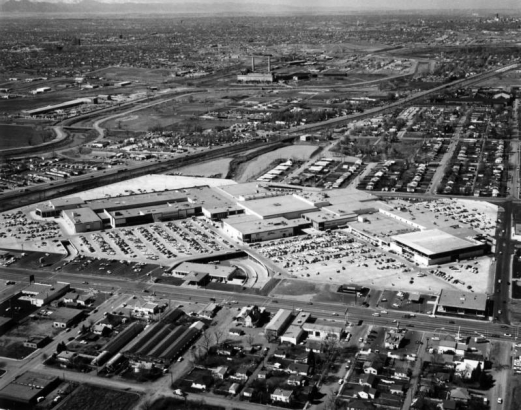 On March 7, 1968, the doors swung open on Cinderella City—a mall that was unlike any shopping center the Denver area had ever seen. On opening day, the new mall boasted more than 1.5 million square feet of space spread across five distinct malls that covered about two miles. It featured 7,000 parking spaces, the promise of more than 250 retailers and an exquisite fountain.

According to its builders, it was the largest indoor shopping center in the world on that spring morning. (Though mostly it would be referred to as, "the largest mall west of the Mississippi.")

Local shoppers went absolutely nuts for the fairy tale shopping space. For decades, it was the place to shop in the Denver area, and customers streamed in from across the Mountain West.

By 1997, however, the clock struck midnight as the employees of Montgomery Ward, the mall's last major retailer, closed its doors for the final time.

The rise and fall of Cinderella City is a story that includes huge helpings of economic postwar optimism, the brutal realities of retail marketing and plenty of nostalgia. 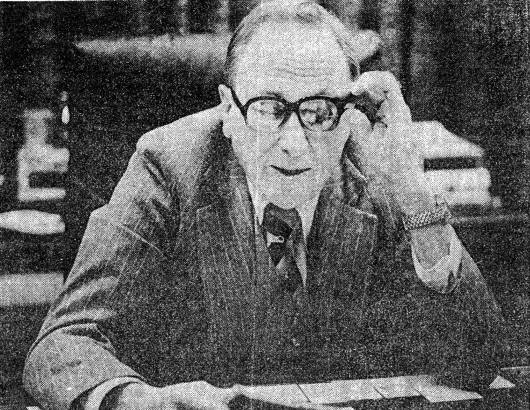 In 1960, Gerri Von Frellick was the king of Denver shopping centers. He had already spearheaded the development of the Villa Italia in Lakewood, which would open in 1962, but was itching for a project that was substantially larger.

That's why he approached the Englewood City Council with an idea that was as risky as it was visionary. Von Frellick wanted to purchase a 55-acre lot near the Englewood City Hall, which had once housed the KLZ radio transmitters, and redevelop it into something the likes of which Denver had never seen.

His project even had a glamorous code name, Cinderella City.

Like the ideas of so many visionaries before him, Von Frellick's plan was met with no small amount of friction. Many locals, including those in Cherry Hills Village, were not happy about the prospect of living near the world's largest shopping center, and the Englewood City Council wasn't crazy about the name. In fact, at various points throughout the mall's early development, Englewood lawmakers openly offered Von Frellick small concessions if he changed the name.

During the early planning stages, in November 1962, the Englewood City Council killed the project entirely. In a 5-2 vote, the Council denied the zoning changes that were required to bring the mall to life. There were, in fact, five votes in favor of the mall, but a two-thirds majority was required for zoning decisions.

A Rocky Mountain News article from November 11, 1962, explained the opposition as stated by attorney Harold Feter saying, "Residents seeking to protect zoning integrity of the area were generally against the shopping center proposal."

After a few courtroom battles, Von Frellick and company finally gained approval for their ambitious plan.

As for the name, Von Frellick claimed that it was just a placeholder. For reasons that appear to be unexplained, he kept the name anyway.

With the challenges of fighting/working with City Hall behind him, Von Frellick was all set to move Cinderella City from dream to reality.

(Cinderella City's move from dream to reality is a subject that's practically worthy of a book-length treatment and falls far beyond the parameters of a single blog post. For more information on this subject, see the scanned news articles in the attached Remembering Cinderella City gallery.) 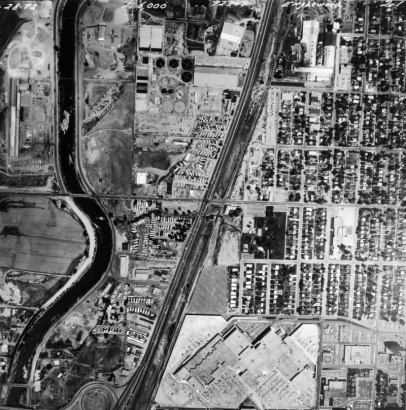 Compared to the challenges of actually receiving permission to build, the construction of Cinderella City was relatively uneventful.

On March 31, 1966, according to the Rocky Mountain News, Von Frellick presided over the groundbreaking of what the paper referred to as, "The New Englewood Shopping Centre." At that time, Von Frellick promised a development that would hire more than 2,500 employees, boast 250 stores and possess a monthly payroll of more than $1 million.

Two years later, on March 7, 1968, the mall was ready to open and was on course to radically alter the shape of retail shopping in the Denver area.

To say that expectations were high on that morning is an understatement. An article in the Rocky Mountain News even suggested as many as 1 million people might visit the mall during its first three days of operations, and both the News and the Denver Post featured special Cinderella City sections. Given that the population of the entire Denver metro area was only around 1.2 million at the time, the Rocky Mountain News's estimate seemed hugely optimistic.

Even so, Cinderella City's opening weekend and its subsequent decades in operation were nothing short of a spectacular success.

(What happened when Cinderella City finally opened its doors to starstruck Colorado shoppers? Find out in Part 2 of "Cinderella City: The Decline and Fall of Colorado's Most Memorable Mall.") 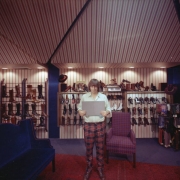 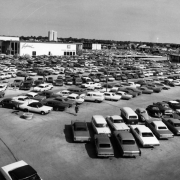 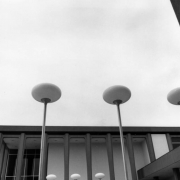 That's quite an odyssey! Thanks for sharing that with us, Richard.

Cinderella City was my introduction to large Industrial, Commercial application of Switchgear, Switchboards, Transformers medium and low voltage, and all secondary distribution equipment. She was my teacher/instructor, and mentor for my lifelong career in the Electrical Industry because she was my first hands on project and I learned a lot; I owe her a lot.

As others have mentioned, the original site was to be the KLZ transmitter location. The other radio connection was that KGMC had their studios near the fountain. It was Englewood's only radio station and was on 1150kc.

I remember there was a really good Mexican restaurant near the front main entrance doors on the main floor. My friends and I use to go there to eat all the time. But I can't remember the name of the place.
You also needed comfortable shoes to get around that place, it was a long walk from one end to the other side of the building.

Hi Dee - You're right about the comfortable shoes, Cinderella City covered a lot of ground!

I missed out on going there many years ago. I drove for over one hour from Colorado Springs only to turn around, it was so far from us, but I regret it!

Sorry you missed out! It was pretty cool. Even though you can't go back, you might enjoy this computer model of the mall that was recently put together!

Do you remember the 25 foot tall Cinderella figure rotating in one of the open central areas? She was there at Christmas. She wore a sparkling blue gown, her white-blond hair up in elegant curls and held a wee glittering coach in one hand.

Cinderella City was not built on a golf course. It was built on a city park, which featured a driving range, miniature golf course, library and swimming pool. The Englewood Golf Course was on the west side of Santa Fe Blvd., now called Broken Tee. Denny Miller field was and still is on the south side of Hampden. It was not bulldozed for the shopping mall, different location.

Can I get a list of the clothing stores that carried beautiful alpaca clothing ?