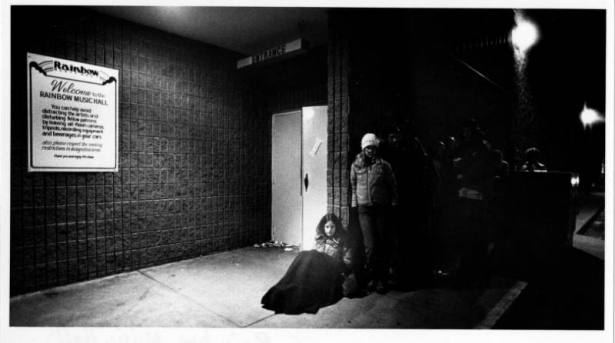 On Friday, January 26, 1979, Denver concert promoter Barry Fey launched The Rainbow Music Hall, which sat on the corner of Monaco and Evans (6360 E. Evans) from 1979 until 1989 when it was shuttered and converted into a Walgreens. During that nine-year period, the unassuming little concert venue (it held about 1300 people) hosted hundreds of artists ranging from Bob Dylan to Black Flag to U2, and just about everyone in between.

Despite its relatively small size, the Rainbow Music Hall filled a huge hole in the Denver concert scene of the 1980's. Not only did the Rainbow boast a spectacular PA that complimented the acoustics of the space, it was also an all-ages venue that played host to smaller, up-and-coming bands like R.E.M. and New Order. 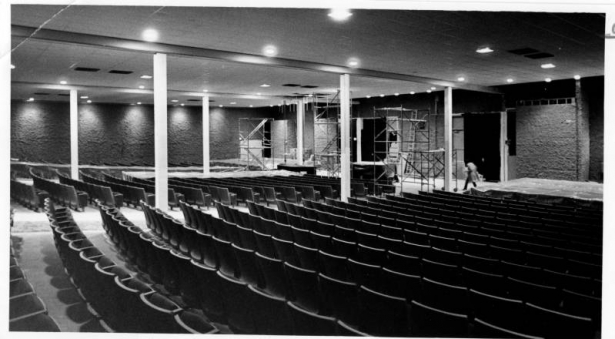 Barry Fey was not known as a particularly soft or sentimental man, but the Rainbow clearly occupied a special place in his heart. He bought the former triplex movie theater in 1978 and set out building a theater that would be much more than your average concert hall.

He described his relationship with Rainbow in a January 19, 1979 article in the Rocky Mountain News saying:

This place means more to me than just opening a concert hall. This is pride, man. I'm partners with the kid. They're the ones that made it possible. Music means more to Denver than someplace else. You couldn't make this happen in Cleveland and Detroit. We're caretakers for the kids who go there. It's their place.

How serious was Fey about making the Rainbow a place, "for the kids"?

For starters, he stayed up nights fretting about the service charges that would be tacked on to each ticket by Select-a-Seat. Select-a-Seat's service fee was a whopping $.60 (about $1.73 in 2016 dollars), but concert-goers who bought tickets at the Rainbow box office could knock that down to just $.10 (or $.29 today).

Parking at the Rainbow was free, but there was only room for about 400 cars. (This would prove to be a thorn in Fey's side as we'll see in a moment.) 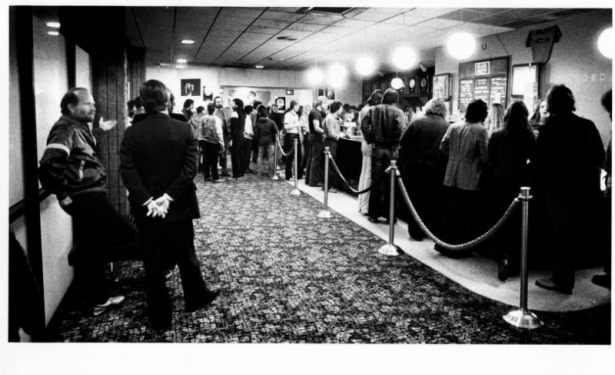 Not All Sunshine and Rainbows

While music fans fell immediately in love with the Rainbow, not everyone was thrilled to see rock and roll pay a visit to the corner of Monaco and Evans.

After about a year and a half of operation, the operators of the Villa Monaco shopping center, whose parking lot bordered the Rainbow's parking lot, were sick and tired of concert-goers using their parking lot as an overflow lot and filed a lawsuit against Fey. The suit contended not only that Rainbow employees were directing patrons to park in their lot, but also that, "loud, raucous and ill-behaved," fans were scaring away customers from the Villa Monaco's stores.

In the summer of 1982, Denver District Judge Harold Reed ruled that concert goers actually could use the Villa Monaco lot. He pointed to an earlier agreement between the Valley Tri and the Villa Monaco allowing overflow parking from the theater in the shopping center. He did, however, point out Fey's obligation to, "prevent any nuisances to shoppers." 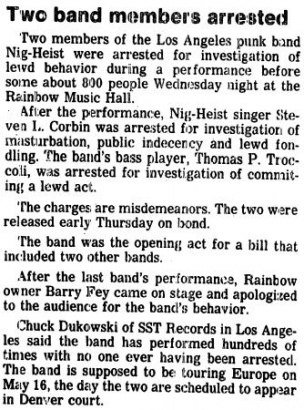 On April 25, 1984, the Rainbow hosted Black Flag, a seminal hardcore punk band from Los Angeles in an evening that would go down in Colorado concert lore.

Black Flag's opening acts that night included the Meat Puppets, who would later score a few alternative hits in the 1990's, and a lesser known act called Nig-Heist.

Nig-Heist was comprised of Black Flag roadies and, as the article above indicates, the show ended with two members of the band spending the night in the Denver County Jail after being charged with indecent exposure. What the above article does not indicate, was what Nig-Heist did onstage to earn that night in jail. At least two Nig-Heist members walked on stage in various states of undress (mostly undressed) and, shall we say, danced as if no one was looking.

In a 2012 interview with Westword, Fey recalled the night as follows:

I had never heard of Black Flag. Their roadies opened for them, and this one a*****e took off all his clothes. I went up on stage, grabbed the mike and said, 'You'll never see a piece of s**** like that again!'

Black Flag front man Henry Rollins also recalled the night in his book, Get in the Van saying:

Mugger and Tom were arrested for being naked on stage when they were playing their set as the Nig Heist...We got them out of jail at 3:30 this morning. Barry Fey is the promoter, a real scumbag. He's horrible and will probably be around for many years to come.

Though Black Flag did return to the Rainbow, Nig-Heist never graced the stage there again. The incident has since faded into lore and legend, and in 2012, Westword placed it #18 on its list of Twenty Fabled Moments in Denver Music. 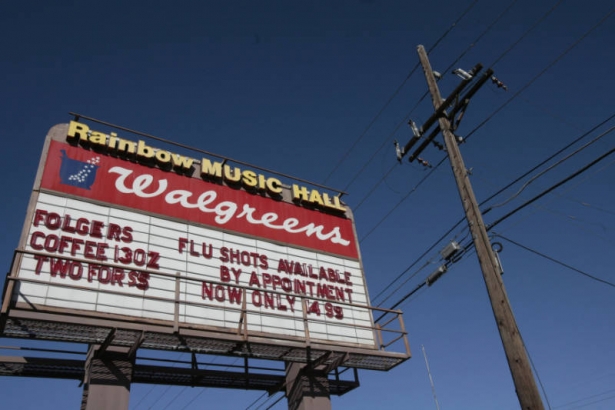 The Rainbow Music Hall closed in 1989 after hosting shows by U2, the Police, Bob Dylan, Willie Nelson, BB King and hundreds more, but the building and sign remained as a Walgreen's. Now the building will be razed and rebuilt, ending its legacy for good...

The End of the Rainbow

Well, almost faded into the ether.

For reasons that aren't entirely clear, Walgreens elected not to tear down the Rainbow Music Hall marquee when they took over the property. So it was that, for nearly 20 years, anyone driving through the intersection of Monaco and Evans was reminded of the glorious slice of Colorado rock 'n' roll history that took place at that location.

In 2009, the Rainbow sign was torn down to make room for a small strip mall that was built in the east corner of what had once been the Rainbow parking lot. With that, all physical traces of the Rainbow faded away for good. Memories of the Rainbow, like so many other lost venues and buildings, live on in memories and, of course, its own dedicated Facebook group.

Interestingly, neither of those shows are included in the list of shows at this venue (the Dregs show was in 1980) so it’s definitely not a complete list.