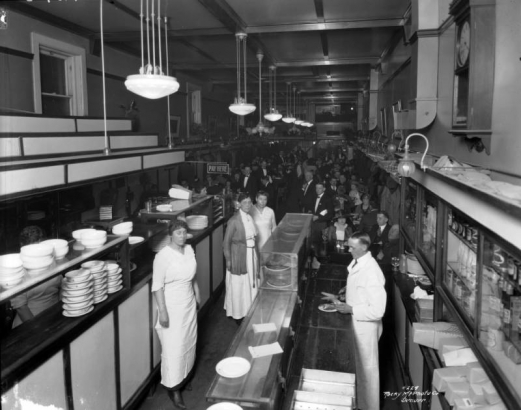 Hardly a day passes at Denver Public Library's Western History/Genealogy Department that someone doesn't mention massive changes that have swept the Mile-High City over the past few years.

Nowhere is the pace of change more visible than in the constant churn of restaurants and bars that keep the Mile-High City fed and watered. Plenty of beloved Denver eateries have been sacrificed at the altar of growth, seemingly leaving nothing more than memories of hot meals and good times with friends and family.

The graveyard of Denver eateries is the subject of a wonderful new book by Colorado authors Robert and Kristen Autobee titled, Lost Restaurants of Denver. This meticulously-researched gem recalls dozens of shuttered restaurants going all the way back to Denver's earliest days. Of course the sections most of us will head to immediately are those that cover restaurants from the 20th Century including The Flying Dutchman, Valente's, The Yum Yum Tree, Round the Corner, and many more forgotten favorites.

Besides detailing a bit of each restaurant's histories, the Autobees unearthed plenty of historical gems including photos of table settings from some of the restaurants and plenty of recipes. One recipe that stands out both for its simplicity and its unassailable Denver pedigree is the North Denver Canoli.

The North Denver Canoli is nothing like the creamy dessert most of us are familiar with and is more like its mainstream cousin, the calzone. This dough-wrapped sausage with a slice of pepper was the brainchild of Denver sausage impresario Richard Carbone. Carbone, legend has it, was reluctant to toss out leftover pizza dough from his North Denver kitchen and used those scraps to create the canoli.

While no one is quite certain how the name canoli got attached to this tasty treat, the name stuck and is still used by those whose time in Denver pre-dates any neighborhood with a marketing slogan for a name. (LoDo and RiNo, we're looking at you.)

Though most of the restaurants the Autobees recall will leave readers longing for the good old days, some of them will leave readers with a bad taste in their mouths that wasn't caused by a poorly prepared meal. In the early years of the 20th Century, Denver was home to a particularly racist chili restaurant called, The White Peoples Chile Parlor.

This not-so-charming eatery stands as a stark reminder that the good old days weren't that good for everyone.

The Autobees drew on a number of sources while researching their book, including WHG's Digital Collections and Menu Collection. In doing so, they've created a wonderful document that's useful for researchers and foodies alike.

Whether you grew up in the shadow of The Yum Yum Tree, or just moved here last year, Lost Restaurants of Denver can provide you with a crash course in Colorado's culinary history that will leave you longing for meals you'll never be able to enjoy, like a bowl of Pagliacci's unforgettable minestrone.

Great Blog Brian! Hoping to see the Apple Tree Shanty and the Purple Onion from the hood I lived in in the 70's and 80's.

Great blog post Brian! The authors also mentioned Patsy's Italian restaurant in an interview so we checked that out a couple weekends ago. Sounds like a great book!

Thanks, Frank! Lost Restaurants is definitely worth checking out.

Enjoyed some favorite times at Apple Tree Shanty. Loved those little apple muffins!
Don't forget Andy"s Smorgasboard, on South Colorado Blvd. Use to wash dishes and shuck oysters there when I was 17.

what about the Library restaurant on Colorado blvd? And Holly Inn (on Evans and Holly) for great Tacorito? And the Turn of the Safeway on Hampden? Saw a fantastic Ray Charles show there in the 80's.
Denver had it's first Marie Calendars outside of Cali on Hampden and Yosemite right next to Toby Jug!?

Unfortunately the price you paid in the early '60's ($.75 for lunch, including Iced Tea) has gone up somewhat.

I am pretty sure I worked at the Library (near Yale) in the 1960's. Unfortunately in about my 2nd hour on the job I dropped a large tray of dishes in the dining area, creating a lot of noise, distraction, and broken dishes. I was quickly fired. That was the end of my Restaurant Career,

That's so funny that you mentioned that because I remember being at Tacorito on Monaco & Evans in the late 60s and somebody dropped a huge tray of mixed drinks. I'll never forget that night because I got the giggles for the rest of the evening after that happened.

Glad to help assist with a smile!

That was the Holly Inn. Home of the "tacorito"! There is still open in Englewood.