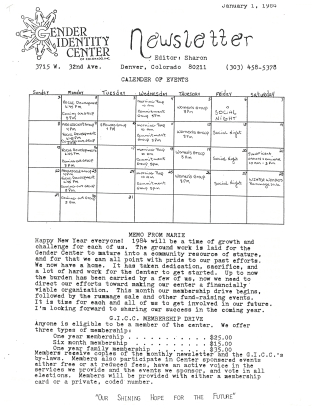 Are you interested in the history of the LGBTQ+ community in Denver? The Western History and Genealogy Department (WHG) has collected stories of the LGBTQ+ community through a partnership with the Colorado History LGBTQ Project at the Center on Colfax. Our Gay, Lesbian, Bisexual, and Transgender Resource Guide can help start you on your research journey.

One story documented in our collections is the early history of the Gender Identity Center of Colorado (GIC). The GIC was organized in 1978 as a nonprofit supporting anyone with a gender-variant identity or expression. Services were available to all people of all genders, including partners, families, and friends.

The GIC story is partially told through the Julia Condolora Papers (WH2449), consisting of GIC business materials, newsletters, and a collection of publications from transgender-focused organizations from around the United States. Julia Condolora was an active member of the organization as the Volunteer Coordinator, Member at Large, and Vice President of the Board of Directors after benefiting from the services offered at the Center.

The GIC operated out of several locations over the years. The first location was in the Highlands area of Denver at 3715 West 32nd Ave. In 1994, the Center relocated to 1455 Ammons Street in Lakewood. The Center offered social support and clinical services specific to the transgender community. Social support services listed in their newsletters included discussion groups for young men, spouses/significant others, new women, male-to-female transitions, and teens. Workshops included fashion, make-up, voice, and movement as well as guest speakers who discussed gender affirmation surgery, hormones, and gender identity.

The story of the GIC began in 1966 when Barbara Cook and Maureen Warfield connected with Virginia Prince. Virginia had previously established a group called Phi Epsilon Phi (later Tri-Ess) in California. Barbara and Maureen were interested in starting a local chapter of Phi Epsilon Phi and asked Virginia for help. From their first meeting at Furr's Cafeteria on Colorado Boulevard, the Denver chapter was born. The group met at Barbara’s home and a Best Western hotel on West Colfax until 1981. Because of a city ordinance against cross-dressing in public that remained in place until 1974, the group often gathered at private residences.

In 1978, a study group was formed at the Gay, Lesbian, Bisexual, and Transgender (GLBT) Community Center of Colorado (later The Center on Colfax) to help people dealing with gender identity questions. Marie, one of the study group leaders who was highly regarded in the drag community, realized the need for support for transgender and cross-dressing communities in Denver. This led Marie to establish the Gender Identity Center in October 1978.

Early in 1979, the two groups came together when Barbara Cook and Marie gave a presentation at the GLBT Community Center. They were introduced to Tomye Kelley, a psychotherapist, who had just finished an internship in Trinidad, Colorado, with Dr. Stanley Biber, who offered therapy for people before gender affirmation surgery. A short time later, they met Anne Bolin, a doctoral candidate in Anthropology at the University of Colorado in Denver, who was interested in studying life transitions.

Marie, Anne, and Tomye were listed as the founding directors when the GIC was incorporated on June 17, 1980. The organization received its 501(c)(3) status on September 20, 1987. In 2018, after some financial difficulties, the GIC was re-formed as the Transgender Center of the Rockies (TCR). TCR is now located inside Mile High Behavioral Healthcare at 3460 South Federal Boulevard in Sheridan, Colorado.

A detailed history of the GIC, written by Barbara Cook, is included in the Julia Condolora Papers (WH2449). The collection includes issues of the Gender Identity Center Newsletter (1984-1991) and Gender Identity Center Journal (1991-2011). To learn more about the transgender community in our collections, please visit us or contact us for more information.