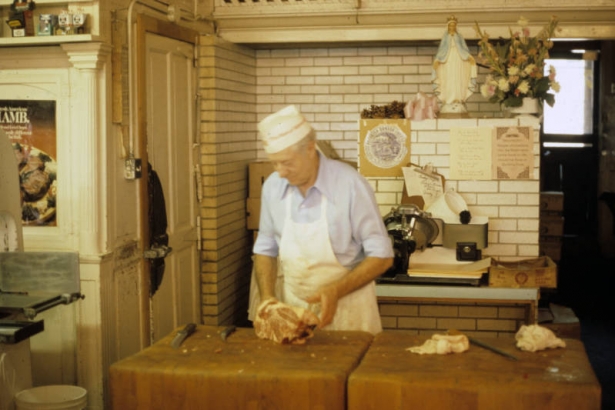 If you grew up in an Italian-American household, there's a good chance that fish was a big part of your Christmas Eve festivities. This custom, which is sometimes known as the Feast of Seven Fishes, is often believed to have been brought over from the old country. In all likelihood, however, the Feast of Seven Fishes might be as American as apple pie (assuming apple pie is actually an American dish).

So what exactly is the Feast of Seven Fishes, and how did it come to be associated with Italian-American Christmas Eve celebrations?

For starters, the Feast of Seven Fishes is a term that has become more common in recent years, but isn't a codified tradition in Italy or even in Italian-American families. In researching this article, we found no formal definitions for the Feast and almost no one agrees on which seven fishes should actually be included. (The phrase, Feast of Seven Fishes is neither a term the Catholic church uses, nor is it a recognized Feast.)

At a recent meeting of our Italian Research Group, the gathered members all agreed that baccalà (salted cod) and calamari should be part of the Christmas Eve dinner but, beyond those two dishes, everyone had their own version of the Seven Fishes—and none of them referred to it as the Feast of Seven Fishes. Some families in the group serve classic American shrimp cocktails along with other fish dishes; others stick to traditional Italian; and still others from 100% Italian-American households consume 0% fish on Christmas Eve.

The Origins of the Fish Dinner

So if there aren't seven official fish dishes for Christmas Eve, why do people call it the Feast of Seven Fishes, and why is fish part of it? The answer to the former question is one that few can seem to agree on, although plenty of theories exist.

Many Italians and their American offspring are Roman Catholics, and Roman Catholics traditionally fast before receiving Communion, especially on Feast Days. (This form of fasting involves an abstinence from meat, but not fish.) Since Christmas Eve is the lead-up to the Feast of the Nativity and many Catholics attend Midnight Mass on Christmas, the fish portion of the feast is pretty easy to explain...but that's where things start getting murky.

There is no such thing as the Feast of Seven Fishes on the Roman Catholic calendar. There never has been an official feast with this name in Italy or the United States. In fact, most sources agree that serving fish on Christmas Eve is mainly practiced by Southern Italians, when it's practiced at all.

This actually makes sense as baccalà is a relatively affordable fish that Southern Italians, many of whom were peasants, would have been able to include in holiday meals. It would also make sense that these same Italians brought this tradition with them when they immigrated to the United States in the late 19th and early 20th centuries.

That leaves the question of where the seven fishes come from and what they symbolize.

As near as we can tell, no one really knows.

Our Western History Subject Index doesn't include any mention of the feast, except for a series of recipes that ran in the Rocky Mountain News in 2008. Nor is the feast mentioned in the 2008 book, Italy in Colorado: Family Histories from Denver and Beyond.

The earliest mention of the feast in the New York Times dates only back to 1987, and even that article contains only anecdotal evidence that the tradition was born in the U.S. Subsequent references to the Feast in the Paper of Record refer only to recipe books and menus. None of these articles contain much in the way of where the seven fishes came from.

In fact, a Google search for the Feast suggests that the term has been used more frequently in recent years than in years past, especially on news sites. A similar dynamic holds true when searching newspaper and magazine databases.

A 2008 article in the New York Times by Maria Laurino titled, "In 7 Fish (More or Less), a Holiday Tradition," lays out plenty of theories as to what the seven fish stand for; the seven sacraments of the Catholic church; seven hills of Rome; the seven deadly sins (though that's not very Christmas-y at all), but steers clear of drawing any conclusions.

On Wikipedia, an anonymous author postulates that seven is the number that appears most frequently in the Bible, but that theory didn't hit home with our Italian Research Group. Very few of them could remember their Catholic parents and grandparents ever reading the Bible, let alone counting the number of times certain numbers appeared in it.

Unearthing the origin and meaning of the Feast of the Seven Fishes, it turns out, is something of a fool's errand.

It seems clear that this tradition, like most traditions, varies greatly from region to region and from family to family. As is also the case with most holiday celebrations, there's really no right or wrong way to do the Feast. In fact, some Italian American families only celebrate three fishes while others (gasp) serve lamb or roast beef on Christmas Eve.

What really matters is the time families spend preparing and consuming their traditional meals during the holidays. Several of our Italian researchers mentioned spending several days preparing stuffed calamari and other fish dishes as a group project. And in an age when families are scattered and traditions are frequently overlooked entirely, that sounds like a pretty good way to spend a holiday, no matter where your ancestors came from.

Are you interested in learning more about your Italian-American ancestry? Join us for our Italian Research Group on the first Wednesday of each month from 10 a.m.-noon in the 10th Mountain Division Room of the Western History and Genealogy Department on Level 5 of the Central Library.

Thanks for the informative article!

Very interesting article. Thanks for sharing this information. I had heard of the feast, but had no other info, so this was fun.

Thanks for the kind words JDB!

So nice to see this! My family is originally from the Bronx and I spoke with my uncle about the tradition. Since we are land-locked, my family no longer has access to amazing fish markets, but my uncle said that on Arthur Ave. in the Bronx a key type of fish included in the feast was conchiglia, which we can't even find here in Colorado. We still have king crab and shrimp, a feast of two fishes :)

Even two fishes sounds pretty good here. Thanks for sharing and have a happy new year!

I can't believe the picture!! I was in this man's small market as a young man. His name was Otti Cerrone, but I'm sure I don't have the correct spelling. He took care of my grandparents and their family, and some of my best memories of my younger days were in his market. THANK YOU for publishing this! My family always has smelts on Christmas Eve for our fish portion, a tradition that I hope will continue as long as I am living!

Hi Mike. Glad that picture brought back some happy memories. Those smelts make for good eating, though it's always a good idea to pop open a few windows before dropping them in the oil. Thanks for sharing your memories with us and have a happy new year!

Mike is our son - - his father is Al Markano - - Al and I have been married 65 years, and have many good memories of Otte (sp?) and Millie, his wife. Took our three children in almost every weekend, for sausage, pepperoni, etc. Great picture - thanks for the memories !!

Hi Rosann! So glad this post brought back fond memories for you and your family. And congratulations on 65 happy years together!