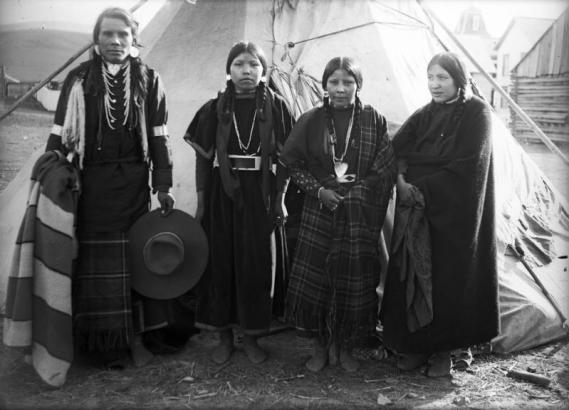 Every week we run across genealogists who are interested in establishing links to their Native American ancestors.

Unfortunately, getting registered on tribal rolls is a complicated, and widely misunderstood, process that could be more than the casual genealogist might want to take on.

If you’re thinking about taking on this complicated task, here are a few points you’ll want to consider.

Federally Recognized Indian Tribes vs. Tribal Rolls
Currently, there are approximately 562 Indian tribes that are recognized by the Federal Government. Native American descendants who can prove their blood ties to members of these tribes who appear on Indian census or tribal rolls can qualify for a Certificate of Degree of Indian or Alaska Native Blood (CDIB).

It’s important to note that receiving a CDIB is not the same as being registered on tribal rolls. Every tribe has its own set of regulations governing who qualifies as a full member and most of them are pretty strict. (This is done both to protect the integrity of the tribe, as well as to ration out scarce tribal resources.)

Researchers should also be aware of the fact that not every tribe or band in the United States is Federally recognized. In some cases, it’s possible to qualify for membership in a tribe, but not for a CDIB.

Do it for the Experience

Genealogists who dig into their Native American ancestry will probably have a more enjoyable experience if they ask themselves what they’re hoping to accomplish.

Anyone who thinks that getting registered on tribal rolls is a shortcut to a free college education or a monthly cut of tribal casino revenues is most likely barking up the wrong tree.

Most tribes aren’t interested in taking on members who are looking for a free ride and only a very limited number of them actually take in significant casino cash anyway.

There’s also a fair bit of confusion about what tribal membership means for college bound students. According to the Bureau of Indian Affairs, “An individual does not automatically receive funding because of Indian ancestry.”

While financial aid is available for students of Native American descent, most of it is need based and none of it is guaranteed.

Researchers who are dead set on making it on to official tribal rolls should steel themselves for some heavy-duty research. While it definitely won’t be easy, organizations like the Native American Law Library have put together some really useful resources to help guide you through the process.

If all you really want is to confirm your connection to one tribe or another for your own edification, that shouldn’t be too tough a project.

Online resources such as Ancestry.com (available at any DPL branch) and FamilySearch.org provide access to Indian census records, and other tools that can help you trace your family origins back to your Native American ancestors.

Not only is this route a lot easier than getting on a tribal roll, it’s a whole lot more fun.

Finally
The question of who decides whether a person is “Indian enough” to qualify for formal tribal membership is both complicated and controversial.

At the same time, this is America where generations of ethnic intermingling allow us the luxury of self-identification. After all, you don’t have to look too far to find people of mixed European descent who self-identify with the group they feel closest to at that moment. (Just visit LoDo on St. Patrick’s Day to see this dynamic in action.)

So our advice to genealogists as they dig into their Native American heritage is to savor the experience of learning about their personal histories without getting involved with a lot of bureaucratic red tape.

(For more in-depth look at how Indian tribes determine membership and how technology impacts those decisions, check out Native American DNA: Tribal Belonging and the False Promise of Genetic Science by Kim Tallbear (University of Minneapolis Press, 2013).

I am a native by my dad (not step dad) and he was part native but know one thiks i am so thank you and i have been trying to find myself and i think i am...! :)

Please help me find my ancestors.

My maternal great- grandfather Jesse Hill married Francis (maiden name could have been Moore or Edwards) Between them they had eight children. They moved fromBroad River, York County, SC. Dove or Dovie Hill being my grandmother.

My paternal grandfather is Fred Reliford (also spelled Relaford). On his death certificate is Thomas Allen from Cherokee, NC. His mother was Channie Sampson (sometimes Tompson or Thompson). Fred was married to Sue Willie Heard.

I am the daughter of Leeomia (on birth certificate Leona) Byers and Robert Reliford. Leeomia is the grand-daughter of Jessie and Francis and daughter of Dove and Author Kincaid Byers.

i found throw my grandmother last name brown related to sexton witch part of the usa indian census dated 1885-1940 odd thing was this link would never been discover but throw a dna test was made possable now i trace backwords throw there tree, not mine shows same thing, this the above page says lot what do we want we want nothing at all from no one but maybe to recover part of what we lost what all people lost, part history, we seak no money seak nothing, we dont care what they have we care what the history says no more