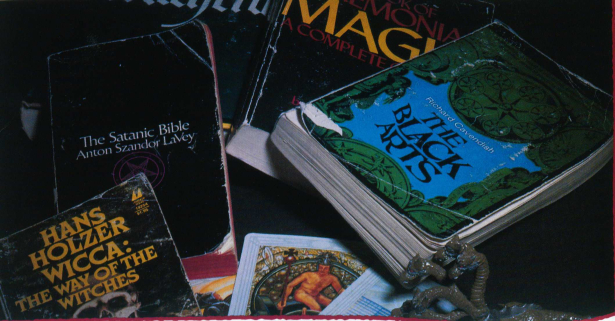 From blood libel covered by Josephus to witch-hunting to QAnon, people have long accused their perceived enemies as insatiable drinkers of baby blood. One of the finest examples of this was the Satanic Panic of the 1980s and 1990s. Many of us who grew up in that period were taught to fear group role-playing games, the screaming guitar licks of Angus Young, and Ouija Boards. Colorado was not exempt from this mad experiment in baseless fear-mongering.

As Chris Root mentioned in a previous article on livestock mutilation, a shift began to happen in the 1970s where our collective paranoia regarding alien visitors was gradually replaced by the suspicion that legions of murderous Satanic cults bent on mutilating livestock and corrupting youth were living among us. In 1973, a group of strict Greek Orthodox parents in Arvada hired a “deprogrammer” from California named Ted Patrick to end their adult daughters’ involvement with Satanism. By all accounts, the women in their early twenties had simply left home and moved in together. They rejected the conservative religious adherence demanded by their parents, but were gainfully employed and showed no signs of being brainwashed by Satanists, vampires, or aliens. In a bit of a Cold War twist, Ted Patrick also believed that communists were behind many of the cults he claimed to rescue people from.

In the summer of 1975, a new rash of cattle mutilations was reported in and around Elbert County, Colorado. Blood was not drained from the animals and there were no human tracks in the area. Some speculated that culprits had used a helicopter to accomplish their impromptu field surgeries. According to the July 15, 1975 edition of the Denver Post, sheriff’s officers suggested that body parts were cut out with sharp instruments by “devil-worshipers” to be used in their “weird rites.” Enter Denver-based evangelist Michael Warnke. 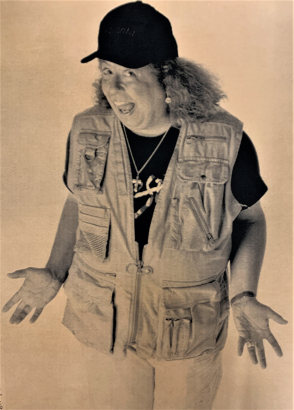 Besides the profitability Warnke found in performing as a “Christian comedian,” he also cashed in on the growing panic by declaring he had been groomed as a “high priest” in a global Satanic network since age 13. As an “expert” in Satanic practice, he declared that the missing ears and genitals of the livestock in question were not the work of four-legged scavengers, but were, more likely, harvested by Satanists checking off their grocery list before their Sabbath. Like many of those making money off a credulous public, Warnke’s entire story was later debunked. The damage was done, however, and the occult paranoia only gained momentum.

Like most other national panics, Warnke and others saw profit margins. Around 1983, Jim McCarthy’s Boulder-based organization Sanctuary, Inc. began popping up in all the papers. The firm, begun under the auspices of the Denver archdiocese, was an independent organization that boasted it received 200 cult-related calls per month and offered consulting services to 70 different organizations including federal, state, and local law enforcement. While actual cults and charismatic leaders certainly existed, Sanctuary Inc. erroneously broadened the worries already brewing in the minds of parents. 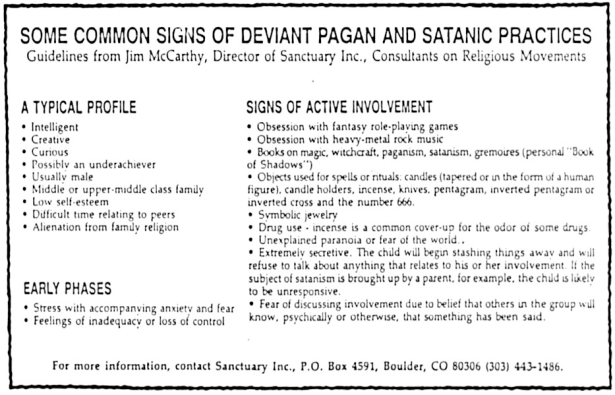 Sanctuary Inc.’s “signs of deviant Pagan and Satanic Practices” appeared in publications all around the state. The typical profile included things like teens being intelligent, creative, curious, and alienated from the family’s religion. Their signs of active involvement listed interests such as role-playing games, incense use, candles, and heavy metal music. Based on this type of overbroad criteria, it would be difficult not to define all teenagers as aspiring cultists. Such sweeping warnings obviously had a positive impact on the bottom lines of self-described deprogrammers and teen treatment facilities.

A much darker aspect of this growing mass delusion was the increasing acceptance of recovered memories of childhood abuse through practices like hypnosis. The 1980 book, Michelle Remembers, recounts a woman’s claims that she was part of a massive Canadian cult beginning in childhood. Michelle Smith and her psychiatrist and soon-to-be husband Lawrence Pazder toured the U.S. and Canada, profited off the books, and flirted with movie deals. Even ten years later, Michelle appeared as a high-profile guest on The Oprah Winfrey Show. A few years later, Smith’s claims were systematically and thoroughly debunked. Sadly, such lies had consequences for many other innocent people. 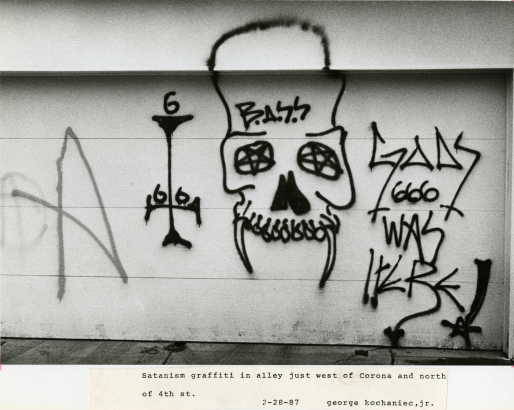 People started presenting their young children, including a four-year-old in Akron, Colorado, making claims of ritual murder taking place at his local daycare center. Soon, investigators began questioning other young children and elicited similar stories. The 67-year-old woman who ran the daycare gave up her license shortly after the story exploded in the town of 1,700. People across the country landed in jail on the flimsiest evidence for murders that never happened to children that never existed. During the Salem Witch Trials, this was referred to as “spectral evidence” and it, sadly, still held sway in the late 20th century.

Things in Colorado did not bode any better once law enforcement started sniffing for Satanists under every rock. In 1987, a Washington postal inspector was looking into allegations that juvenile runaways were being recruited in Denver for, specifically, Satanic pornography. That same year, Denver Police Department’s freshly minted Occult Crimes Unit uncovered a “Satanic gang” of 12 to 15 people who were suspected of minor burglaries and graffiti that depicted upside-down crosses, skulls, and the number 666. Sadly, the March 15, 1987 issue of the Rocky Mountain News announced that reporters were unable to find and interview any of these mysterious mischief-makers. The next day’s edition of the News quoted self-described experts on Satanic crime,

“Officials have no proof that human sacrifice and ritual sexual assaults have occurred in Colorado, but they have plenty of interesting evidence and suspicion.”

The lack of solid proof was no impediment to rising suspicions and misguided action on the part of authorities. Police in Greeley rounded up 30 juveniles and six 18-year-olds for trespassing into a field that contained a shed rumored to be the “witch house.” While the teens seemed intent on scaring each other, no human sacrifice appeared to be on the evening’s schedule. 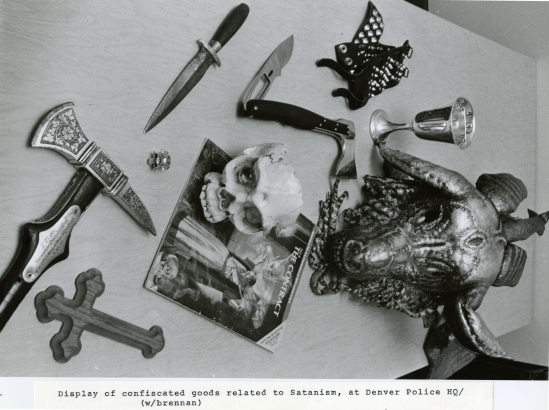 “It's in our government. It's in our schools...The person sitting next to you in church may be a Satanist.” Rocky Mountain News, October 27, 1988

He invoked the usual culprits of rock music and Dungeons and Dragons (known as “D&D”). Down the road at Smoky Hill, officials were working to identify and counsel potential Satanists. The event that brought this about? Someone was found with a live kitten in their locker. Said kitten had a mohawk haircut and pentagram earrings.

As the 1980s came to a close, momentum only continued to build. Jim McCarthy continued to attend seminars about the evils of D&D and heavy metal music. He had now become the head of Bethesda PsychHealth, which claimed to be the only hospital in the country devoted to treating ritual abuse in families. In 1989, notorious shock jock/preacher/exorcist Bob Larson was starting his radio show in Denver and brought together 450 people to watch him interview and debate former and current Satanists. Like any good con artist, attendance was contingent on a small entrance fee of $95. That is not to say that the entertainment would disappoint. Larson had the usual coterie of performers willing to make a buck by recounting all the human sacrifices they witnessed over decades with the Satanic underground. In 2014, Larson was still raking it in by performing exorcisms over Skype for $295. 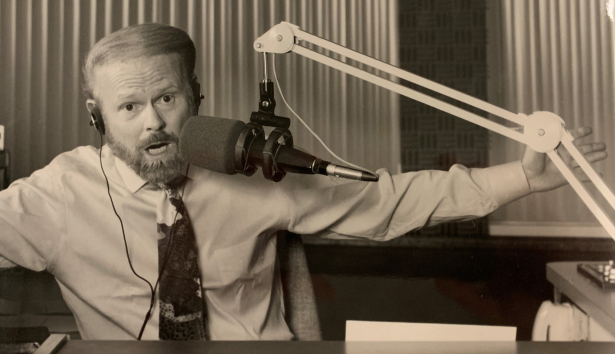 Colorado’s small mountain communities were not exempt from this insanity either. Halloween 1990 was a stressful ordeal for many residents of Kremmling, Colorado. Rumors circulated that a new cult was planning to sacrifice pets and possibly local children during the holiday. The terrifying cult turned out to be a group of teenage boys (terrifying enough, to be sure) who had talked about one of them sacrificing a cat, but decided against it because the boy liked cats. Their “leader” opposed alcohol and drugs, so they held their ritual communion using soda. The “cult” and accompanying paranoia evaporated as quickly as it had materialized.

While much of the country had begun moving past the panic, University of Denver Professor Carl Raschke had become an advisor to the American Family Foundation and worked to keep the panic alive. In a September 16, 1990, interview with the Rocky Mountain News, he issued the usual warnings about D&D, Judas Priest, and the Church of Satan (which, for the record, does not believe in a literal Satan). Raschke also had high praise for the police and media for bringing this scourge of devilry to the public’s attention. Of course, he felt compelled to write his own book, Painted Black, in an effort to keep the collective American lizard brain screaming in fear...and buying more books. 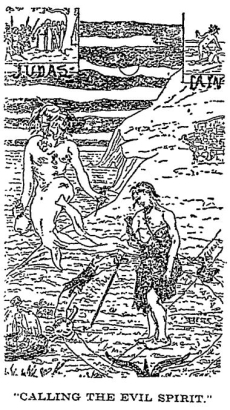 While QAnon and other movements of mass delusion are often presented as comically stupid, it is important to remember that there are real victims on the receiving end. Perhaps the most well-known victims were Dan and Frances Keller of Austin, Texas. They were tried and convicted of Satanic ritual abuse against the children who attended their preschool. They ended up being exonerated, after spending 21 years in prison due to a modern-day witch trial. They were eventually awarded $3.4 million for their trouble, but it's hard to imagine anything could compensate someone for two decades in prison for a conviction that was based on fantasy. While our first inclination may be to mock and dismiss such deranged social movements, history teaches us that we should be ever vigilant against such manias taking hold and spreading.

Note: For those with a particular interest in the history of witch hunts, the Western History and Genealogy Department has a special treat for you. We have within our archives an early 1596 edition of Daemonolatreiae libri tres by Nicolas Remy. This was the witch-hunting guide that supplanted the infamous Malleus Maleficarum (Hammer of Witches). Remy was celebrated as an expert on witchcraft and demonology and oversaw the executions of some 800 innocent people accused of consorting with Satan. Members of the public are welcome to come by and request a viewing of the unique relic from one of the darker periods in human history.

If you want a fictional take on the Satanic Panic, or at least the day care part of it, pick up the horror book "Whisper Down the Lane." Link: https://catalog.denverlibrary.org/view.aspx?cn=2212866

Thanks so much for linking to that. It sounds like the perfect novel to reflect back on this period.

Great blog! Fear seems to be the tool most used to motivate people in the most interesting ways...

Thanks for the kind words. As long as fear works, it seems it will be employed.

What a fantastic post! I've been listening to the podcast "You're Wrong About" which debunks moral panics so it was very cool (and exasperating!) to learn about the local version of Satanic Panic. That Warnke was a piece of work!

Thanks so much! A colleague recently recommended that podcast too. What is also surprising is that Warnke is still around...as is Bob Larson.

Great article. Thanks for writing this!

Thanks so much for the kind words.

What a great article! I particularly liked the "common signs of deviant pagan and satanic practices" lol

Thank you for this!

Im so glad you enjoyed it. I also remember television ads for rehab centers at the time suggesting that your teen is likely a drug addict if they are moody and don't love hanging out with their parents.