NOTE: While I have made an effort to use as inoffensive language as possible, this post contains subject matter and imagery which some may find disturbing.

In my last post, I discussed the origins of the notion that livestock mutilations were caused by aliens who, apparently, really hated farm animals. Near the end I mentioned that aliens were not, in fact, the only proposed resolution for unexplained animal deaths. In keeping with the spirit of Halloween, I’ll be delving into a couple of those alternate hypotheses here. 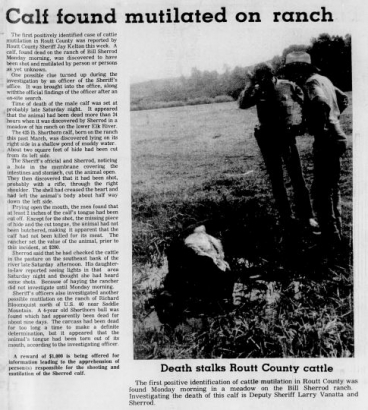 Steamboat Pilot - September 11, 1975
A case where being 'first' isn't necessarily a good thing.

As might be expected, many people rejected the notion that aliens would expend the massive amounts of time and energy it would require to travel thousands of light years merely to chop up a few cows. Nevertheless, barnyard animals do sometimes die for unknown reasons, and “I don’t know” is rarely a satisfying explanation as to why. Beginning in the mid-1970s, and throughout the 1980s, one of the more popular explanations was, of course, Satanic Ritual Animal Sacrifice (patent pending).

Denver Post - October 5, 1975
That moment when you read the fine print, and see that animal sacrifice is actually prohibited...

This was not much of a surprise to many. During that era, Satanism was the go-to scapegoat for many of the ills of the world, from ritual child abuse, to murders, to drug use, and to the aforementioned cattle mutilation. There were also alleged to be a great many gateways into the Satanic lifestyle, including (but not limited to) playing Dungeons and Dragons, playing video games, and listening to heavy metal music. (As someone who did all three, I can personally attest that the closest I ever came to mutilating a cow was sloppily eating a cheeseburger.) 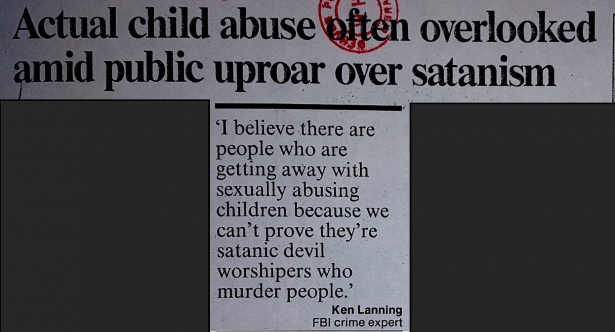 One thing that remains unclear is whether there actually was an increase in the number or frequency of animal deaths during this period. It’s entirely possible that the general public became aware of the situation, sparking an interest which was then reflected in the media. The salacious nature of the reporting would then have created even more public interest, forming the basis of a big ol’ feedback loop. Regardless, whether aliens or Satanists, or merely a media frenzy, the occurrences captured public interest. 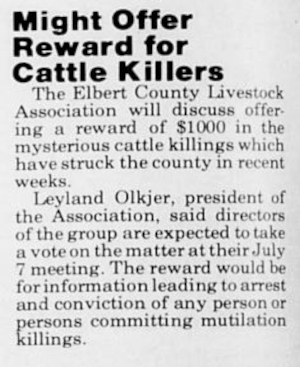 Odd though aliens and devil worshippers may seem, there was at least one other rather extraordinary interpretation of the evidence. Frederick W. Smith, in his book Cattle Mutilation: The Unthinkable Truth, proposed a rather unique and bizarre amalgamation of those two supposed explanations. Not right away, mind you. The book takes a long and circuitous route to get to the point promised by the title, including a rather staggering amount of redundancy, with phrases and ideas repeated ad nauseum. Even then the book measures in at well under 100 pages and makes for little more than an entertaining afternoon’s diversion. The vast majority of Smith’s book amounts to cautions against brainwashing, claims that the government and other vague powers were suppressing the truth, and assertions that science was unreliable and on the verge of crashing-and-burning in rather spectacular fashion. 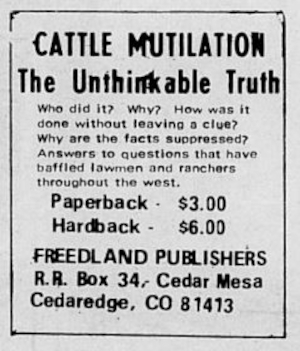 Unfortunately for Smith, his book was published in 1976, and since that time science has gone on to map the human genome, inhabit Mars with multiple robots, discover water on the moon, and make numerous medical breakthroughs. This doesn’t even touch on the astonishing advances in computing, not to mention the internet. There’s certainly a discussion to be made as to whether the internet has ultimately been beneficial on balance, but nevertheless, it’s clear that science was not quite as close to its death throes as Smith predicted. 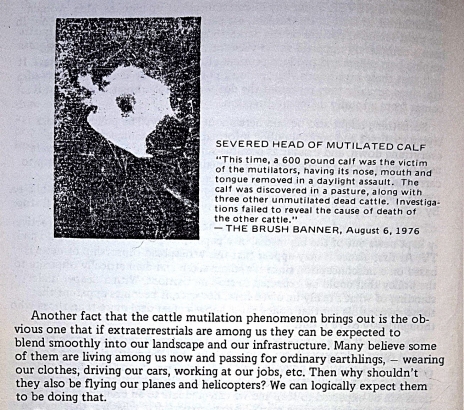 Would that be Modal Logic, Syllogistic Logic, or Mr. Spock Logic..?

Smith also strongly implies that the alien hypothesis was a widely accepted scientific view of the phenomenon, which he then points to as evidence that the scientific community may not be reliable. His primary criticism of science revealed a fundamental misunderstanding of the scientific method. Throughout the book he repeatedly conflates methodological naturalism with materialism. While those two things certainly have some overlap, they are not nearly as interchangeable as Smith seems to think they are.

How, exactly, does he know all this? Stop asking questions is how.

Materialism is the assertion that there is nothing in or beyond the cosmos which is not composed of matter and/or energy. Methodological naturalism, on the other hand, merely recognizes that we cannot reliably test for nor detect anything outside the natural realm, and therefore we must exclude such suppositions from calculations and experimentation until a time when we can. In other words, science does not presume that the supernatural does not or could not exist—merely that it can’t be incorporated into science unless and until it can be reliably and testable demonstrated. 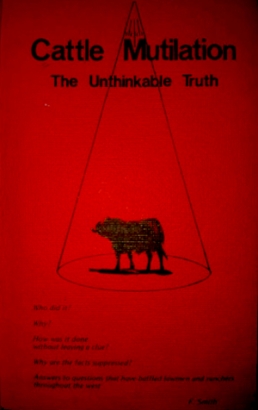 Perhaps "The Unwarranted Claims" would have made a more accurate subtitle.

Smith also casts aspersions on the reliability of the press, suggesting a conspiracy between the government (or other authorities) and the press to suppress and hide information from the public, allegedly to deter more mutilations by denying the actors publicity for their crimes.

“Something might also be said here about publicity. The policy of those trying to direct and control public information on this subject is to play everything down, and insofar as possible suppress public interest and awareness of what’s actually happening. The media has been told to cool it, not to carry the news even though there’s an intense public interest in developments. The reasoning behind this, ostensibly, is that mutilators want publicity. By cutting off public exposure, the primary cause of mutilations, they’ll stop.”

(This claim is severely undermined by the vast number of newspaper articles in our clippings files, and on the Colorado Historic Newspaper Collection site regarding the acts.)

“The most obviously crazy stuff, however, that gets the most media coverage, comes largely or perhaps entirely from government plants and agents that are coached and financed for no other purpose than to give the whole subject a black eye and make it appear stupid and insane.”

If you’re even slightly observant, you may have noticed that Smith makes quite a few assertions about who is involved in disseminating information, and what their motives are, and the answer to your question is no, he never does provide any evidence for those assertions. It gets even worse, and much, much weirder. Smith believes wholeheartedly that UFO sightings and animal slaughter are indeed connected, but he doesn’t believe that the culprits are extraterrestrials per se. In fact, he asserts that these beings have been constantly monitoring humanity since before the dawn of civilization. 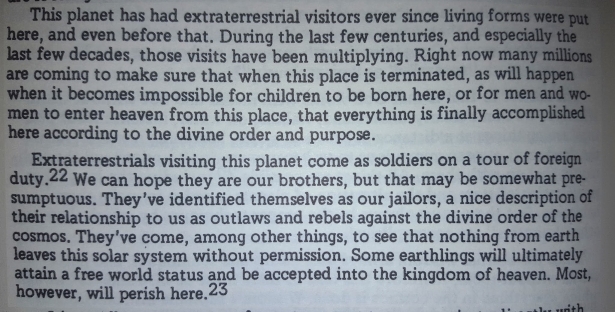 According to Smith, the Earth itself, and by extension humanity, is a fundamentally broken part in God’s celestial machine. In his view, the “aliens” are God’s other children (unbroken), sent to monitor humanity to ensure that our corruption doesn’t spread beyond our tiny planet. While Smith never outright refers to them as angels, that is certainly the implication. (He also claimed that time stops for anyone traveling at the speed of light, and therefore these beings can travel anywhere instantaneously... a claim which I'm sure would surprise a great many physicists.)

So many questions. Let's start with "Why hope it's a girl alien, though?"

As to why they mutilate animals? Well, that’s only actually delved into in the last few pages of Smith’s book, and is best represented by his own words:

“...What they’re really interested in is reproduction, not of cattle, but of humans. They’re looking intently to see how far down the tube we are. That will tell them how long they may have to be here. They don’t really know that, but by this broad sampling of animal tissue they’ll be more able to make an educated guess.

”Out of respect for the human form, God’s image, they’d never dissect human bodies no matter how much might be learned from that. They observe a cosmic rule against dissecting the human form. Also that isn’t necessary, since they can discover what they want to know from an analysis of animal tissues.”

(See what I meant about redundancy?)

Why reproduction? To answer that question, we need to delve a bit deeper into the mutilations themselves. One of the reasons people inferred correlations among the disparate animals was that they contained some similarities, which suggested a pattern. In many cases, external organs were noticed to be missing, including ears, lips and, in a not insignificant number of instances, male genitalia. In a lower proportion of instances, internal organs were also reported missing, and that included female reproductive organs as well. 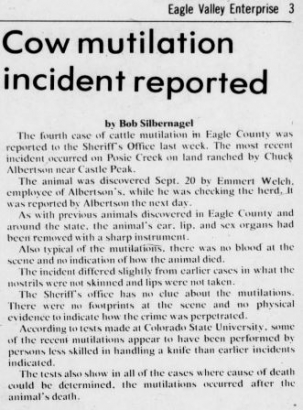 Eagle Valley Register - October 10, 1975
Why does this article look like it was written in Iambic Pentameter?

Of course missing genitalia was exactly the kind of lurid detail which would lead to these stories being reported, and the kind of thing that would spur the imaginations of Mr. Smith, as well as those pointing to a more mundane solution. The fact that ears and lips were the most commonly reported bits to be missing didn’t seem to register with those intent on finding a titillating cause. Apparently, the thought that perhaps those were the first bits to go missing because they were the most easily accessible and easiest to excise by scavengers or predators never crossed their minds. 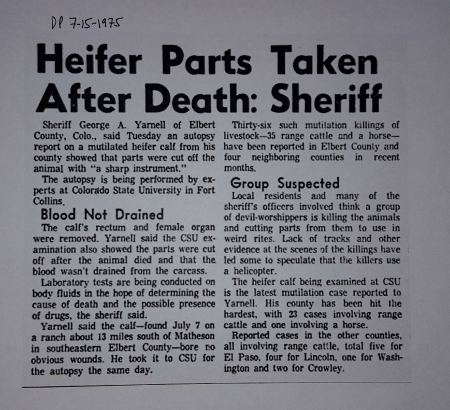 Denver Post - July 15, 1975
Less extreme assumptions, to be sure, but assumptions nonetheless.

One other ‘mystery’ which was often pointed to was the fact that there was no blood found at the majority of the scenes. What was frequently overlooked is that, also in the majority of cases, the animals were deceased prior to any disfigurement taking place. The most likely reason no blood was found at the scene is because, despite what Hollywood may portray, wounds bleed very little once the heart is no longer beating. 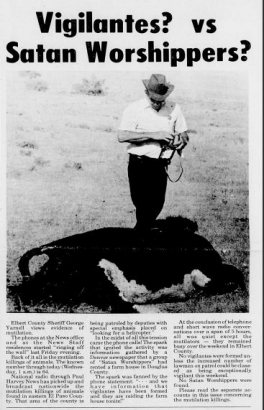 In truth, it’s likely that some instances actually were deliberate acts at the hands of people. Perhaps some actually were at the hands of real-life Satanists. Other cases could possibly be attributed to bored teens, inspired by the reports, and possessing a twisted idea of entertainment. Regardless, the fact remains that the vast majority of reported deaths could easily be explained without the need to scrounge for nefarious causes. At least the notion that ritualistic slaughter was responsible for the spate of deaths was more plausible than “aliens did it”—and I suppose there’s something to be said for that.