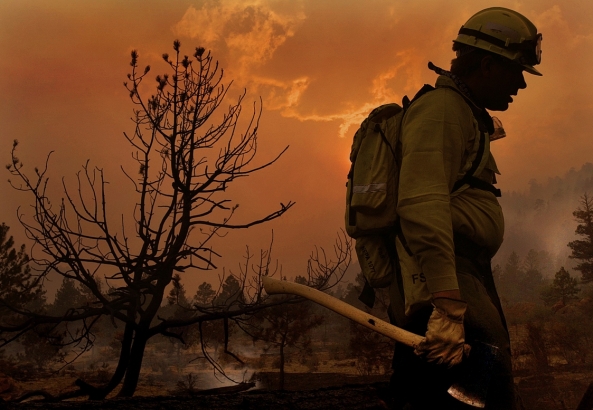 The Rocky Mountain News had some great photographers! It takes more than being at the right place at the right time to take an award-winning photograph. Framing, angle, and lighting are just the beginning. The Rocky's photographers had this gift, along with all the photo editors working diligently behind the scenes.

We want to celebrate the work of all the photographers and photo editors who played a role in each of the photographic Pulitzer Prizes won by the Rocky. Each photographer's name is linked to all of their images available in our Rocky Mountain News digital collections (including Linda McConnell's Braeburn apple photo above) — not just their Pulitzer Prize work. Their professionalism did not stop after the award ceremony. Please take a moment to enjoy the award-worthy photography they produced on a daily basis!

We're still working on the Rocky Mountain News collections, so if you find a photo with a misspelled name, wrong name, or other error — add a comment to the photo and we'll be happy to look into it.

All of the great work we did as staff at the Rocky and you use a photo of an applets represent it? How about any one of the thousands of award wining photos? Contact Janet Reeves and get some help editing...

My past editors are cringing, let me try again.

Of all the great work produced by the Rocky photo staff, DPL selects a photo of an apple to represent it? How about selecting one of the thousands of award winning photos, we produced, to represent the body of work? Contact Janet Reeves for some help on editing...

Thanks Dennis for noticing this! I suspect the previous image was included as a place-holder while I prepared the Pulitzer Prize collection in our digital library, and tragically did not replace it when the time came to post. I do apologize for that and you're absolutely correct that there are far more appropriate images to showcase this work.