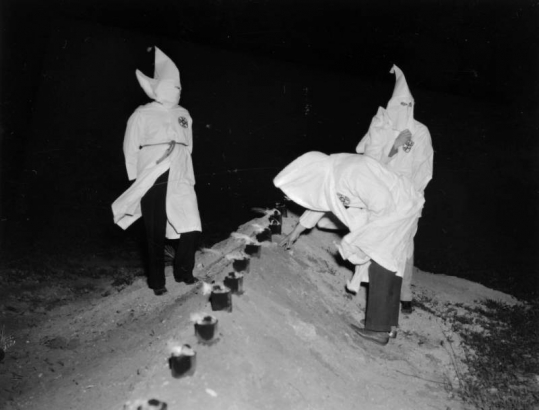 The story of the Ku Klux Klan in Colorado is one of the more shameful episodes in Centennial State history.

During the early 1920s, the racist organization enjoyed widespread support throughout the state and had members (or sympathizers) in places of power, including the Mayor of Denver (and other municipalities), and the Governor's Office.

But politicians were hardly the only Coloradans who supported the KKK's despicable agenda. Klansmen (and Klanswomen) could be found in offices, retail stores, farms, and just about everywhere else in the state. This phenomena is particularly evident in the pages of the Rocky Mountain American, a weekly Klan newspaper that was published in Boulder between January 31-July 31, 1925.

In short, it was like most of the rest of the United States, which made it fertile ground for the Klan's anti-immigrant, anti-Catholic message.

What's Inside a Klan Paper, Anyway?

Content-wise, the Rocky Mountain American is pretty much what one might expect from a KKK publication. Articles include diatribes against immigrants; lectures on values; and plenty of ire aimed the Federal Government and the creeping specter of socialism on our shores.

Sadly, much of the content in this publication could be published word-for-word today and find a welcoming audience amongst political extremists.

The Klan's message was so mainstream that national companies such as Piggly-Wiggly and JC Penney were more than happy to advertise in the pages of the Rocky Mountain American.

Penney's, according to Phil Goodstein's 2006 book, In the Shadow of the Klan When the KKK Rule Denver, 1920-1926, even sold Wizard pillowcases and sheets for budding Klansmen who couldn't afford pricey tailored sheets.

But national companies weren't the only ones supporting the Klan at that time plenty of Boulder Valley businesses happily advertised their services in the pages of the Rocky Mountain American. 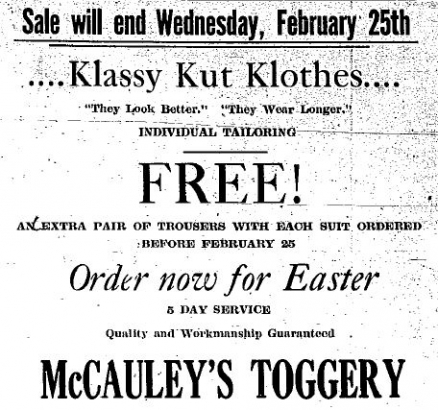 From its inception in the ashes of the Civil War, secrecy was always the KKK's calling card. Klan members made judicious use of the letter "K" to signal their sympathies to other racists. While that was a useful strategy when the Klan was night-riding and burning crosses, it wasn't exactly a necessity once the organization met with the sort of mainstream acceptance it experienced during the 1920s.

This convergence of tradition and open operation led to some unfortunate Klannish advertising from businesses that have been out of business for decades.

One particularly egregious example of this phenomenon came from McCauley's Toggerey, a clothing store that operated from 1845 12th Street. Their advertising (pictured above) included the cringe-worthy tag line, "Klassy Kut Klothes. They look better. They wear longer."

McCauley's was certainly not the only local business to fly its Klan flag in the pages of the Rocky Mountain American.

The proprietors of Koke's Auto Service, home of, "Klean, Klassy Kars," were so confident of their pull with local Klansmen that they didn't even include their address and phone number in their advertising.

As shocking as these examples are to our modern sensibilities, they were everyday occurrences during the Klan's reign in Colorado. That reign would prove to be in its dying days during the Rocky Mountain American's six-month run.

By the mid-point of 1925, both the national and Colorado KKK found their fortunes waning due to several financial and sexual scandals. On the national level, in particular, an absolutely abhorrent attack by KKK Grand Wizard, D.C. Stephenson, on his secretary (who later died from wounds inflicted during the assault), and subsequent conviction on those charges, took the wind out of the Klan's revival.

These scandals cost the Klan their hard-won mainstream credibility and sent them back to the shadows, where they'd dwell until re-emerging during the Civil Rights struggle of the 1960s.

With the specter of scandal all around its core constituency, the Rocky Mountain American ceased publication on July 31, 1925, after just six months of operation.

Though the Klan has had several relatively short-lived revivals since the time of the Rocky Mountain American, it hasn't enjoyed anywhere near the sort of mainstream acceptance it enjoyed in the 1920s.

(To learn more about the KKK in Colorado, check out When the Klan Ruled Denver: Not So Long Ago)