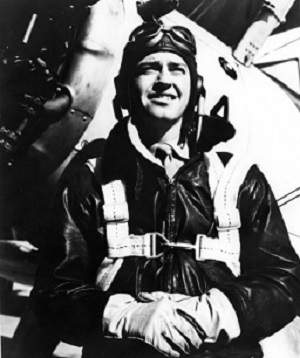 On August 4, 1945, just four days before America dropped an atomic bomb on Hiroshima that ended World War II, Lieutenant Norman Becker sat down in the pilot's seat of his C-54 transport plane somewhere in the South Pacific. Though Becker was an experienced pilot, he would not return from that fateful flight. Later that day, Becker was reported as missing in action (MIA) and before the year was done, his family received word at their home at 422 South Gaylord Street that that the young pilot had been killed in action.

Becker's story came to us in the form of two yellowed newspaper clippings and a photo of the dashing pilot that were housed in a Ziploc bag that was tucked into a box of donated books. Whether Becker was forgotten by his surviving family or the items were simply lost is something we'll never know, but on the occasion of Veterans Day, we wanted to take a few moments to remember Lieutenant Becker, and all the men and women who have served in our country's armed forces.

According to the newspaper articles that accompanied Becker's picture, Becker was a 1940 graduate of Denver's South High School. While that may well have been true, Becker's picture does not appear in the S.S. SoHiAn (South High's yearbook) in 1938, 1939 or 1940.

Records from the 1930 census confirm that the Becker family did indeed live at the Gaylord Street address that was mentioned in the newspaper articles. Becker's father was the manager of a plumbing shop and he and his wife both moved to Denver from Wisconsin. Becker was the middle of three brothers. His oldest brother Lawrence served in the South Pacific Theater with the U.S. Army and his younger brother Floyd also served in the Navy.

Tracking down the dates of the articles that recorded Becker's death proved problematic as the clippings don't include a date. That makes it very difficult to find out exactly when Becker's parents received the terrible news about their son. (It's difficult, from this distance, to comprehend how their loss was compounded by the fact the Lt. Becker died just eight days before Japan's surrender ended World War II.)

The article does mention the fact that Becker enlisted in the Navy in 1942, and completed his flight training in May of 1943. He served as a flight instructor in Corpus Christi until May of 1945 when he shipped off to the South Pacific. It doesn't take too big a stretch of the imagination to picture Becker lining up to join the fight against the Axis powers in the chaos, excitement and fear of post-Pearl Harbor America. 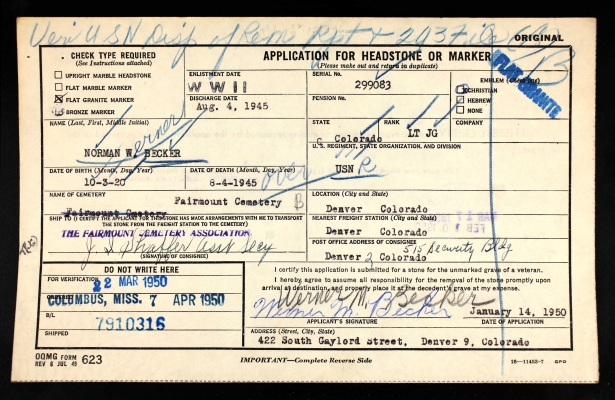 We do know from a record posted on Ancestry.com (which is available for free at any DPL branch) that Becker's parents applied for a veteran's grave marker in 1950 and that Becker was buried at Fairmount Cemetery in 1950. It's unclear when Becker's remains actually made it back to the United States, but that simple act must have provided some comfort the young airman's family.

Becker's return to Denver was likely part of a larger effort by the U..S Government that began in 1947 to bring home the remains of soldiers and sailors who died overseas during the war. By the time that program ended, according to the Wall Street Journal, 171,000 of the identified 280,000 fallen soldiers had been returned to U.S. soil. (The U.S. Government now practices a policy called, Concurrent Return, which repatriates the remains of American soldiers without interring them overseas.)

It's unclear why Becker's picture and clippings are no longer with his family. What we do know is that Becker's sacrifice is not forgotten this Veterans Day, nor are the sacrifices and service of all those who have worn the uniform of the Army, Navy, Air Force, Marines and Coast Guard. On this Veterans Day, the staff of Denver Public Library's Western History/Genealogy Department would like to thank all those who have answered our country's call of duty, especially those like Becker who made the ultimate sacrifice.

Want to learn more about the Colorado men and women who have served our country? Check out these DPL resources:

Great job. I'll have to look for him next time I'm out at Fairmount.

Thanks for the kind words, Keegan. Lt. Becker is in Fairmount Block 96 and rests right next to his mother and father.

Thanks! I'll leave a flower.

What in the World is Vinegar Pie: Recreating a Historic Recipe
Print Your Own Money: The Story of the First Denver Mint
The Owl Club of Denver
DPL: A 'Chief Interest in People and Books' for 130 Years
Who was the first baby born in Denver? The answer depends on how you ask
Ice Houses: How Early Denver Kept Its Cool