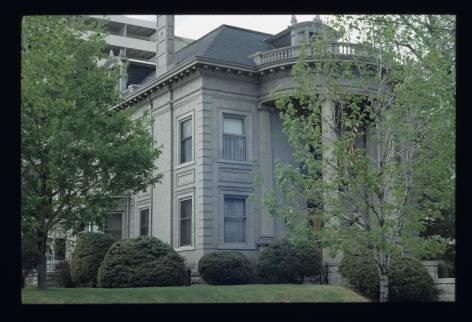 Do you ever wonder about the past lives of old Denver mansions?

At 709 Clarkson Street sits a brick and stone Neo-Classical Revival mansion that once belonged to brewery magnate Adolph Zang (1856-1916).
Denver currently enjoys a reputation as ​a ​craft brewing hotspot, but beer has been part of its industry for many years. Adolph Zang’s father, Phillip, bought the Rocky Mountain Brewery around 1869. Adolph and his wife, Minnie, moved to Denver in 1882, when Adolph took over management of his father’s brewery. Adolph turned the Zang Brewery into one of the most successful breweries west of the Mississippi River. An English syndicate bought the business in 1889, but Adolph continued to manage it until his retirement in 1913.
The Adolph Zang Mansion was designed by architect Frederick Carl Eberley (1844-1915) and completed in 1903. Eberley was the architect of several early buildings in Denver​,​ including the Barth Hotel (17th and Blake) and much of the Tivoli Brewery complex (10th and Larimer).
Adolph Zang's​ 38-room home boasted a ladies’ sitting room with a pastel Parisian canvas ceiling, a third-floor ballroom with white birch floors, and a dining room illuminated by a gold leaf ceiling and Tiffany chandelier. Another highlight? Seven painted glass windows in the home were created by an artist named Brandt, who completed windows in New York City’s famed St. Patrick’s Cathedral.
Curious about the history of more Denver homes? Perhaps even your own?
Check out DPL’s Building & Neighborhood History Collection in the Western History/Genealogy Department (5th Floor, Central Library) ​and​ online! This collection contains a wealth of resources for researching the history of Denver buildings, neighborhoods, and architectural styles. Included are early building permits, real estate and fire insurance atlases, and directories.

I was privileged to live in this home from July 1975 until the summer of 1977. I hosted tours through the house every Thursday night for approximately 2 years. I love this house. Great memories. My bedroom was on the 2nd floor above the porch. 3 of the 4 walls were windows and I had every window open during the warmer months and slept soundly with a summer breeze blowing through the room. I explored every inch of this magnificent home. What an adventure for a young boy to live here for 2 years.
Thanks for sharing your story, Mark. What a lucky boy you were! Did you have another favorite room besides the wonderful, window-filled bedroom?
Do you have any stories, or have you heard of any stories about this house being haunted?
Ahh you must of lived there when we had those crazy Zang family reunions. I was a little kid and remember really long dining room table with a bunch of grumpy old aunts. But my better memories are of rolling around on the lawn.
Hi, Nicole! We haven't come across any stories of hauntings at the home, but you may enjoy Phil Goodstein's The Ghosts of Denver: Capitol Hill: http://catalog.denverlibrary.org/view.aspx?cn=272465
I was in Denver as a missionary for the Church of Jesus Christ of Latter-day Saints, also known as the Mormons (1970-1972). The house served as the mission home which I always thought interesting since Mormons don't drink. The house was beautiful and filled with state of the art conveniences for the era in which it was built, such as windows that were alarmed and if I remember right, a rudimentary intercom system. I remember the stained glass windows. We would link hands and shuffle our feet in the ballroom and the missionary nearest the window would touch the lead between the glass in the window and the one on the other end would get a static spark that would jump 2-3 inches. All thanks to the low humidity. Good memories.
Mr. Bailey: I am doing research regarding a meeting which took place at the Mission House during the 1960s. I am trying to determine if the Mission House used a sign in procedure to recorded visitors? Thanks Bob Hennessey
I'm a great-grand daughter of Adolph Zang. I'm youngest in the family and have fewer memories of being in the home when it was owned by the family, but I remember visiting a few times when it was the mission home, and I seem to remember they had a sign-in book for visitors. I suggest you see if you can find the mission assistants to whomever was the mission president during that time. They could tell you affirmatively.
This is really cool.
This home holds special memories for me having lived there from March 1954 to March 1958. The Church of Jesus Christ of Latter-day Saints owned the home as a Mission Home and my father, A.Lewis Elggren, was the mission president. I will always cherish the privilege of living there and the many amazing people we met and grew to love who passed through that beautiful front entrance.