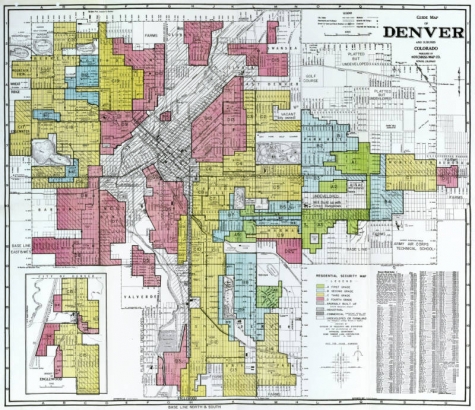 UPDATE: This map has been digitized and is available here. Accompanying reports are available here through the Mapping Inequality project.

A new addition to the resources available in DPL's Western History and Genealogy Department (WHG) comes all the way from the National Archives and Records Administration (NARA).

When a customer asked reference staff at the Central Library if "redlining" maps of Denver from the 1930s were available at DPL, we scoured the WHG collections—but came up empty-handed.

"Redlining" generally refers to the practice of withholding home loan funds from neighborhoods considered poor economic risks. When the United States government created the Home Owner's Loan Corporation (HOLC) to assist with the refinancing of mortgages during the Depression, the agency used assessors to rate the desirability of neighborhoods. These assessors looked at:

"...intensity of the sale and rental demand; percentage of home ownership; age and type of building; economic stability of area; social status of the population; sufficiency of public utilities, accessibility of schools, churches and business centers; transportation methods; topography of the area; and the restrictions set up to protect the neighborhood."  Report #9, Summary, Re-survey of Denver, Colorado by the Division of Research & Statistics

Neighborhoods were ranked from most desirable to least and assigned letter grades of A, B, C or D (which were color-coded on "redlining" maps as green, blue, yellow and red respectively).

The reports and maps made by these assessors in the 1930s are retained in the Records of the Home Owners' Loan Corporation (Record Group 195.3) at NARA. We contacted NARA to find out if "redlining" maps and reports had been created for Denver at that time. The answer: they had.

DPL's Western History and Genealogy Department (Central Library, Level 5) now houses a full-color copy of HOLC's 1938 "redlining" map of Denver (known as a "residential security map") as well as two accompanying reports that can be viewed in the Department. Please note that the "redlining" map has now been digitized.

To view how assessors described and classified Denver neighborhoods, see a report below for neighborhood D-15 (Swansea/Elyria area). The assessor described the area as having been affected by "detrimental influences" including "unpaved streets" and the "stench from stockyards and packing plants west of the area." 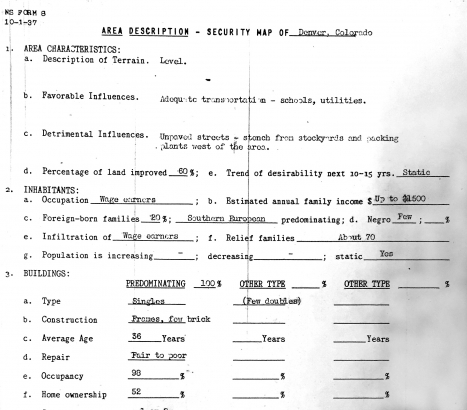 Report of D-15 neighborhood, 1938. Copy obtained from the National Archives and Records Administration.

any chance it will be digitized soon? your illustrative snapshot is a tease because it omits the neighborhoods i know best — even another snapshot or two would be cool

We hope to digitize it sometime soon. Is there a neighborhood you are particularly interested in that I could check on for you?

This map is now digitized.

thanks — most interested in both sides of Broadway south of 6th Ave. — Baker & Speer, but may not have been so-named in 1938

You will want to view Report 9 for the following areas, which correlate to today's Baker and Speer neighborhoods:

Any data on redlining in El Paso county or Colorado Springs?

Hey, I'd like to chat with you about this topic when you get a chance. No hurry.

Hi Katie. Thanks for this resource. Do you have suggestions about how to find the area report documents for specific areas of Denver? There's some interesting information in there. Thanks!

You'll want to check out the Mapping Inequality project online, which has some of the area descriptions transcribed and scanned:

Additionally, the Western History and Genealogy department has copies of the accompanying reports, which can be viewed here in the department.