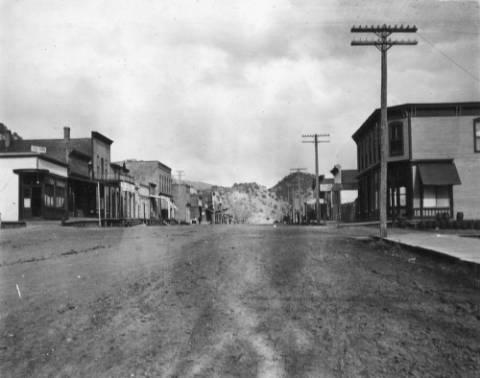 The town of New Castle was one of many Western Slope towns incorporated during the coal boom of the 1880’s, but is one of few coal towns from that era to have survived. During Colorado’s silver heyday, silver mining required coal to fire smelters. New Castle was renowned in both railroad and silver circles for providing a soft coal that burned good and hot. The first settler came to farm this narrow valley along the Colorado River in 1883, but by 1888, when the town officially incorporated, it was hopping with coal miners, including many immigrants from Italy and the United Kingdom. The Colorado Midland Railroad followed, and its narrow gauge trains carried coal from New Castle’s coal mines to the silver mines and beyond. Despite its prosperity, New Castle has suffered tragedy out of proportion to a town its size. New Castle has been the location of two of Colorado’s ten worst mining disasters and one of its worst train collisions. On 18 February 1896, the Vulcan Mine exploded, killing 49 men. Townspeople in New Castle rushed into the streets and miners from neighboring mines hurried to help. The mine was flooded to staunch the fire and then closed. It was reopened under new ownership some years later, only to have another tragedy strike. On 13 December 1913, the Vulcan Mine exploded again, this time killing 37 miners. Both times, miners had complained about high concentrations of methane gas before the explosions, but dubious inspections had kept the mines open. The second Vulcan explosion signaled the end of coal mining in New Castle, but even today, the coal in the seam that the Vulcan mined still burns inside the mountain, and smoke is sometimes visible. Thanks to ranching, farming, tourism and the presence of railroads that connected it to Aspen, Glenwood Springs and Grand Junction, New Castle survived as a town and is once again a vibrant little place with an outsized history. Many of New Castle’s historic 19th Century buildings still stand today, some visible from I-70. To learn more about New Castle, including its role in Colorado’s labor wars, come to Western History and Genealogy and read the short and wonderful book by Dale Shrull, The Legend of Burning Mountain. Search DPL’s catalog to find the many other histories of small Colorado towns that live both here in our department and elsewhere in DPL. For more information about the photos of New Castle in this blog, click here and here. View our Digital Archives for more photos of New Castle and other Colorado towns.