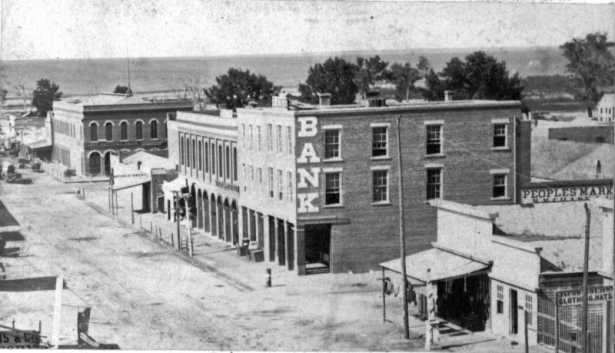 Is Market Street Denver's most notorious street? Though that honor is usually reserved for Colfax Avenue, Market Street has been giving its longer neighbor a run for its money in recent years. Every weekend, chaos reigns on Market Street as Lower Downtown bars disgorge drunken patrons onto the streets of Denver. Sunday morning news headlines describing the aftermath of bar let-out frequently include stories like Woman across the street wounded in LoDo gun battle, second arrest made and Denver Police investigate 2 downtown shootings Friday morning.

While the problems on Market Street should be taken seriously, it's worth noting that chaos, violence and vice are hardly new arrivals to Market Street. Market Street and its predecessors have been the center of controversy almost since Denver's beginning in 1858.  In fact, Market Street's name has changed multiple times in an effort to shake its nasty reputation, a story that's related in some detail in both Phil Goodstein's Denver Streets: names, number, locations, logic and Jerome Smiley's History of Denver.

Long Before it was Market it was McGaa

Before Market Street was Market Street it was called Holladay Street, but before that it was known as McGaa Street. It was one of the first streets platted on the land that would become the Mile High City. The street was named after William McGaa, an adventurer who lived among the Arapahoe Indians inhabiting the Front Range of the Rockies. Though Indians had lived on the land for ages, in McGaa's era it was claimed by the US and was part of the Kansas Territory. He was in the area when Charles Nichols arrived in 1858 and set up a settlement called St. Charles.

When Nichols went back to the more established part of Kansas Territory to file his claim on the settlement, McGaa agreed to keep watch on St. Charles, which was little more than just a single cabin. As Nichols likely didn't know McGaa very well, he was probably surprised when he returned that spring to find McGaa working with William Larimer to set up Denver on that same spot. In short, he'd been claim-jumped, and there wasn't anything he could do about it but go with the flow. Denver was established, and St. Charles was history.

Part of the McGaa-Larimer conspiracy involved platting out streets for the new town and naming them after both local Indian tribes and themselves. Larimer and McGaa Streets were the main north/south thoroughfares in the new town, and businesses began springing up on them at a remarkably rapid rate.

Unsurprisingly, McGaa turned out to be a not-great representative of the newly birthed city on the plains. He was prone to violence, and the ready supply of strong liquor in Denver fueled his bad behavior. By 1866 he had burned all his bridges and the City gave McGaa Street a new name, Holladay Street (demonstrating that 21st-century Americans are hardly the first ones to remove offensive names from public places).

The name change did not sit well with McGaa, who moved from Denver to Laporte. He did return to Denver in 1867 long enough to get himself arrested for public drunkenness. While sleeping off his inebriation in a cramped jail cell, McGaa suffocated to death.

While there's no longer a "McGaa Street" in Denver, there is a street named for a different McGaa. William's wife Wewatta remained in favor with the powers-that-be in Denver, and her name has graced Wewatta Street ever since. 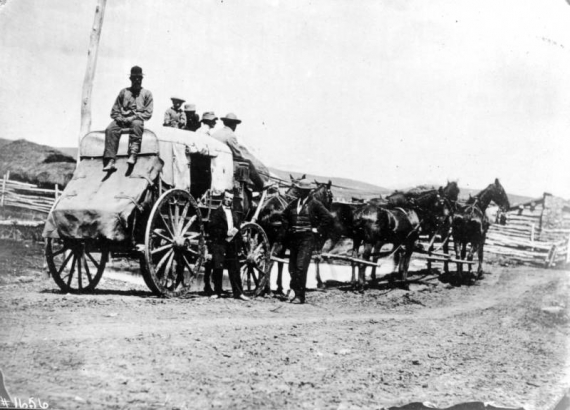 Ben Holladay was nationally known as the "Stagecoach King" for his transportation empire, which included a stagecoach stop in Denver rather than in Auraria, the municipality that sat on the west side of Cherry Creek. However Holladay Street's character compared to McGaa's; it had became home to slew of gambling halls and houses of prostitution. Indeed, Holladay Street played the role in 19th-century Denver that Colfax Avenue would play in 20th-century Denver - a situation that did not sit well with Holladay's family.

After his death in 1887, Holladay's descendants pushed the City to remove their father's name from the street that was associated with vice of all kinds (something Schuyler Colfax's family never thought necessary).

City planners acquiesced to the Holladay family's request and changed the name to Market Street. The name seemed like a good fit, since in addition to vice, it also was home to a number of grocers, butchers and vegetable vendors. In Denver Streets Phil Goodstein points out that the Market Street above 23rd Street and west of Cherry Creek kept that name until it was renamed Walnut Street in 1899. Apparently Market Street's reputation just didn't sit well with the folks in that part of town either. 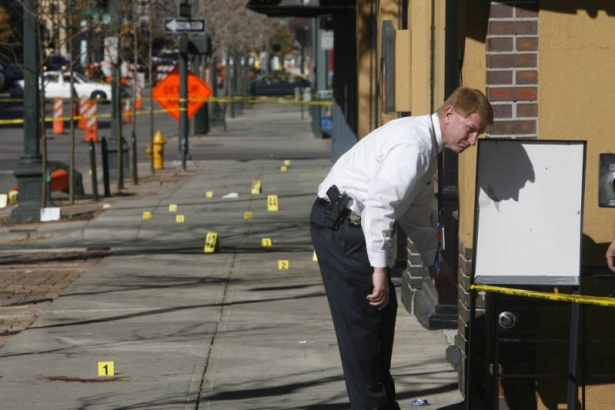 Denver Police and CSI review the crime scene at the corner of 15th and Market St where eight people where shot early Sunday Morning. Police collect evidence that will point to a group of men who are believed to have followed the victims on their vehicl...

Market's Street's contemporary issues are nothing to make light of, but they're definitely not a condition that's unique to our times. That said, it's highly unlikely that Market Street will see another name change. While the houses of prostitution and gambling halls are long gone, the problems that come with heavy drink remain. And while the periodic hail of gunfire that accompanies last call on a Saturday night are terrifying and dangerous, they've been a part of the Denver landscape almost as long as there's been a Denver landscape.

Interesting read. I always wondered where the name Wewatta came from.

Thanks, Monica! You'd be amazed at the interesting facts we run across when researching these blogs that we aren't able to include!

Didn't McGaa have a second wife named Wazee, and so naming two streets after his wives?

Hi Tom - Thanks for reading and commenting. It's been rumored that Wazee Street was named for a different Indian woman who had a relationship with McGaa (and certainly wouldn't be surprising) but that's never been confirmed. Wewatta, however, was definitely his wife and that has been confirmed. The haze of history creates lots of interesting interpretations!

Back in the '80s there was a restaurant/bar in lower downtown called The McGaa Lounge. I'm assuming it was on Market Street but so much has been torn down and rebuilt in that part of town I can't recognize where it might have been.

I think that Wazee is also named after McGaa's wife? He had more than one wife, and Wazee and Wewatta were Native American.

Hi Jude - According to Phil Goodstein's book "Denver Streets" (our go-to for any Denver street question) Wazee was "allegedly" named for one of McGaa's mistresses - though that's never been confirmed. Thanks for reading and commenting!

I enjoy information about Denver’s history, anything from the early beginnings up to today. Hard to believe all of the recent growth in the area that used to be under the viaducts.

Besides being one of William McGaa's wives, I read somewhere that Wewatta was the first woman to give birth in the newly incorporated city of Denver. Of course I read that more than a decade ago and cannot find it. Perhaps I just imagined it...

Hi Rob - Thanks for reading and commenting. It's generally agreed that William Denver McGaa, the son of McGaa Sr. and Wewatta was the first recorded baby born in Denver. That said, there are competing claims and their credibility is determined by how you frame the question. We dug into this very subject in some detail in a blog we did back in 2020. We hope you enjoy that one, too!

William McGaa was married to Jennie Adams when she was 15 years old and he was 38. Jennie was my great-great-grandmother, and she was half Oglala Lakota (Sioux). Their cabin, a very nice one by the standards of 1859, was on Indian Row on Cherry Creek. Their son, William Denver McGaa, was born there in 1859, and he was the first predominantly white child to be born in Denver. I am currently writing a family history book so have been doing considerable research. McGaa disappeared for several years and was presumed dead. Jennie then married Joseph Brown, my great-great-grandfather, in 1868. Meanwhile, McGaa resurfaced and was heartbroken that Jennie had remarried. He started drinking heavily and it is very likely he sought the comfort of Native women, hence Wewatta and Wazee. Jennie Adams McGaa Brown is definitely the mother of William Denver McGaa.