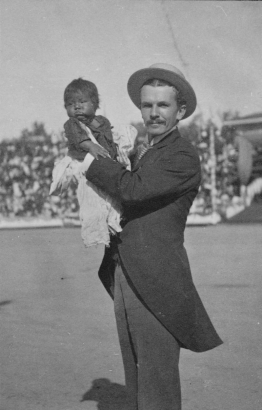 Who was the first baby born in Denver? The answer to that question may vary depending on a variety of factors such as strict geography, race, and, more simply, how you ask.

For example, a quick search of DPL's Western History Subject Index reveals multiple citations with competing claims for the title of "first baby born in Denver." 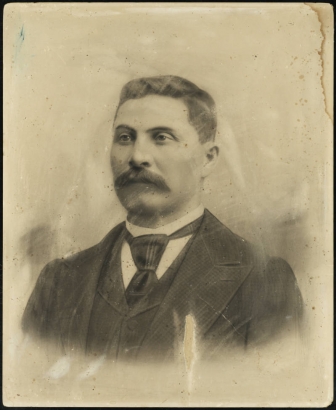 Though all of these people might claim, in one form or another, to be the first baby born in Denver, it's pretty clear that not all of them could be.

Most sources agree that McGaa was probably the first.

His father William McGaa was one Denver City's founders and the McGaa family was awarded several town lots in honor of the occasion. The family's early ties to Denver are well-documented in the records of Denver's predecessor, St. Charles Township, in 1858, and William McGaa, Sr. was likely in the Denver area even before that time. McGaa's mother, a member of the Arapahoe tribe, is the namesake of contemporary Denver's Wewatta Street, and the street now known as Market Street was originally named McGaa Street.

Barker, Dolman, and Talbot all qualify their births as the "first white male" born in Denver which, in their eyes, puts McGaa out of the running. Barker's claim is backed up by primary sources in a 1925 article in The Trail helpfully titled, "Our First White Boy."

Mary Butler claimed to be the first white girl born in Denver, according to a 1924 Rocky Mountain News article titled, "Denver Still Home of First White Girl to Be Born in Colorado." That claim could be true, as Auraria Humbell had been born in the town of Auraria before it was absorbed by Denver in December of 1859. Her parents were similarly awarded several lots in honor of their daughter's auspicious birth. Historian Jerome Smiley writes,

"The elated Directors of the Auraria Town Company in their zealous pride in the birth of the first white child at the mouth of Cherry creek, donated a town lot to Miss Auraria, and three more to her parents."

Butler's claim to be the first Miss Colorado, in 1876, is uncontested.

Further confusing the issue of the first baby born in Denver is an unverified account relayed by Captain Richard Sopris to Denver pioneer Charles G. Chever, as written by Smiley. It recounts a traveling gambler named Fitzgerald or Fitzpatrick whose wife may have given birth in Denver in the summer or early autumn of 1859. Though no further record of that child's birth appears to exist. 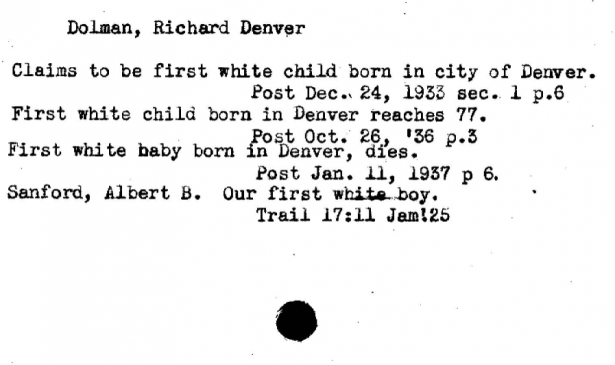 There is a theme throughout these references that illustrates some strengths and obvious weaknesses of the Denver Public Library's Western History and Genealogy Collection.

On the positive side, finding well-sourced citations to prove or disprove any of these claims is pretty easy. In fact, there were more sources on this subject than we could use in this single blog. Of course, the flip-side is that finding information about non-white or less-prominent settlers and previous inhabitants of the land around Cherry Creek is extremely difficult.

For example, the article "Our First White Boy" uses a letter from Dolman's mother (who is not named) describing her arrival in Denver that reads,

"We arrived in Denver July 18, 1859 we put up our tent on Blake Streete more thane 200 hundred Indians wigwams of Arrapahoes and chyans they was very peaceable and friendly..."

While it's impossible to know for certain how many Indian dwellings were in place when the Dolmans arrived in Denver, it seems a safe guess that there could have been a child born in one of them at some point between July and October of 1859. But those births would not have been on the pioneers' radar unless the father was a prominent white man.

Some births simply mattered more to the pioneers and early historians than others - as the cases of William Denver McGaa and Richard Denver Dolman prove. McGaa was half American Indian which, in the eyes of those early chroniclers, made his birth less noteworthy than Dolman's, as Dolman was the product of an all-white union. The Trail, which was the official publication of the Colorado Historical Society, confirms this idea by stating flatly, "The Historical Society is equally interested in establishing the claim of the first white girl born in Denver..."

The fact of the matter is that in 1859 the settlements around Cherry Creek were not particularly diverse. Most of those pioneers were from places like Kansas and Georgia and consisted primarily of white men. Denver and Auraria's female population was extremely sparse at the time, making any birth somewhat unusual - though some men, like McGaa Sr., did pair with "Indian wives." These relationships were relatively fluid and would likely be jettisoned when the opportunity to pair with a white woman was presented.

Hispanic residents were found in greater numbers in the southern part of the state where they had resided for many years, though there were certainly at least a few Hispanics in the Denver/Auraria area.

There were also a small number of African-Americans who passed through or settled in the Denver settlements, but their presence in historical resources like Smiley's History of Denver is relatively sparse. The possibility that an African-American mountain man like James Beckwourth could have fathered a child with an Indian woman in the area is not unthinkable.

Our colleagues at the Blair Caldwell African American Research Library point out the fact that African American families would have been more likely to record a birth in a family bible than on an official registry. Given these circumstances, we haven't run across a card in the Western History Subject Index reading, "First African American Baby Born in Denver."

So who was really the first baby born in Denver? If the official existence of a place called "Denver" and an official record of that child's birth is the standard, then the crown rests on William Denver McGaa's head. If the question is left more general, then the answer is, we'll never really know for certain.

S. M. Rooker brought his wife daughter and son from Salt Lake in summer of 1858. He is credited with having built one of the first 3 houses in Auraria which was completed around October 25-29, 1858. Beyond that I can find no information on the man or the family. But I think the son, at least, was still in Denver in 1925. Can anyone point me in the direction of finding out what became of S.M. Rooker and family?

Lena Magnes is another candidate for the first white girl, born May 11, 1860 "on the banks of Cherry Creek". They didn't say which bank, but at that time most of the campers were on the undeveloped east bank (Denver)
https://www.littletongov.org/my-littleton/littleton-history/biographies/magnes
https://www.findagrave.com/memorial/82351092/lena-josephene-borge