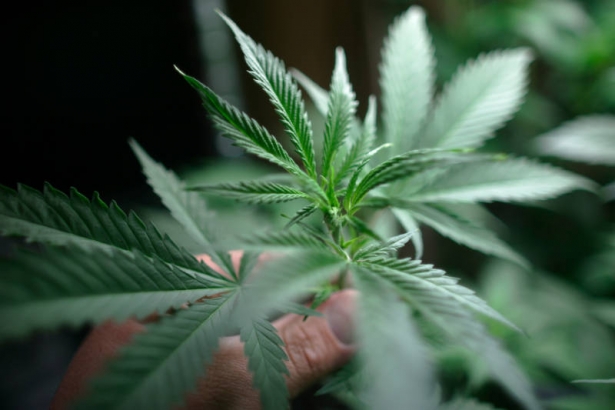 If you happen to drive past Denver's historic Civic Center Park on the afternoon of April 20th, you could be forgiven for thinking that every man, woman and child in the Mile-High City is stoned off their collective minds. That's because Denver is host to the country's largest public 4/20 rally.

The 4/20 rally, which took place this year on 4/18-4/19, is a celebration of all things marijuana-related, and draws tens of thousands of pot enthusiasts, along with the ire of city politicians, to Denver's city center. For this unofficial holiday, we searched through our Western History Subject Index to look back on Colorado's long relationship with the fragrant, and now legal, weed.

What we found in the 66 "Marijuana" cards was a story that includes a lot sensationalism, misinformation, and no small amount of plain old racism.

Blame it on the Immigrants

The earliest marijuana entry in our index comes from March 27, 1929, and includes all three of the aforementioned black marks against journalism. The headline of the story reads, "Amended Bill Hits Traffic in Marijuana." On its face, the story is about the State Senate's efforts to increase penalties for repeat drug dealers. But dig into the story and the ugly bits quickly emerge, beginning with a quote from Val Higgins, the City Chaplain and anti-drug advocate explaining the need for the bill.

The use of marijuana came into the state with the Mexicans migrating here for agricultural work. Its use is growing because of the increasing number of Mexicans and the ease with which most of them have been able to avoid penalties.

The good chaplain followed up his less-than-enlightened view on "Mexicans" with a totally inaccurate, but commonly held, view on marijuana's supposed addictive properties.

Smoking only a few marijuana cigarettes is likely to give a person the marijuana habit.

Marijuana's reputation as an addictive poison peddled by immigrants to innocent children picked up steam in the early 1930s and reached a fever pitch in 1936 - the same year the notorious anti-pot film, Reefer Madness, was released. That year, the Rocky ran a short article exposing a problem with large amounts of pot, which was not yet illegal under Federal law, being grown in Colorado.

The article, which ran under the headline, "Habit-Forming Marijuana Grown in Great Quantities in Colorado," warns that 3.5 tons of pot had already been seized by local authorities in just the previous nine months. In keeping with the spirit of the times, the article's author includes a dubious thought on who exactly was indulging in reefer use from U.S. Narcotic Bureau Head, Joseph A. Manning who said:

Many morphine users have switched to the weed because morphine now costs them $1 a grain. The average morphine user requires seven grains each day, making the cost prohibitive in most cases.

Barely a year later, the sale and use of marijuana became a Federal crime under the Marijuana Tax Act of 1937. Just three days after the law went into effect two Denver men, Samuel R. Caldwell and Moses Baca, became the first Americans arrested under the act after Caldwell attempted to sell Baca a couple joints at an apartment building in Downtown Denver.

The two unfortunate men were made into examples of what could happen to reefer users and dealers and caught the full force of the law and the press. A Denver Post article about the men described Baca as a man who had recently attempted to murder his wife. (Though the paper offered nothing in the way of details about the supposed crime.)

Caldwell received a four-year prison sentence and Baca went away for 18 months.

At their trial, U.S. District Judge J. Foster Symes made his feeling on pot use very clear saying:

Marijuana destroys life. I have no sympathy for those who sell this weed.

In the face of troubling events in Europe and a World War, pot use seemingly slipped from the Colorado media's radar until the late 1940s when it roared back full force. An April 10, 1949, Rocky Mountain News article screams forth, "Marijuana Raid Shatters Haven of Drug Addicts." Though more than a decade had passed since the Reefer Madness hysteria, the reporter covering the story of a police raid on a "tea party" showed that not much had changed.

The incident was one of a growing number of police cases arising from Denver's small but disturbing traffic in illicit marijuana the which is making derelicts of men and women and fostering vagrancy, crime and insanity in the city.

Marranzino went on to resurrect the suggestion that budget-minded Centennial State morphine addicts were switching to pot because of its lower price and ready availability.

Nothing Funny About it

Though tales of reefer madness seem humorous today, they were anything but funny to people like Andrew Livesay and Walter T. Beckett.

Beckett and Livesay were busted for growing 45 pot plants in the garden of his home at 4408 Milwaukee Street in the summer of 1951. While the headline, "Clothespin Gets Addict Extra Marijuana Puff," caught our attention, the accompanying story provided anything but a laugh.

Both the men faced serious prison time for their extracurricular agricultural activities and devastation for their young families. While being arrested, Livesay voiced an opinion that would be echoed by pot advocates for decades to come:

Marijuana isn't as bad as alcohol - it isn't nearly as habit-forming. And I never knew anyone who used marijuana and committed a violent crime.

During the 1960s and 1970s, Coloradans' attitudes toward pot use slowly softened.

As the Age of Aquarius progressed, pot headlines seemed to focus more on grow house busts and much of the Reefer Madness hysteria softened (though pot was every bit as illegal as it was in the preceding decades).

By the late 1970s, discussions of pot's potential medical uses, and a generally less hysterical style of reporting, began to dominate the Colorado media's coverage of all things marijuana-related.

Of course the 21st Century brought Colorado to the forefront of the pot debate as the state became the first in the Union to legalize the sale and use of recreational marijuana.

Marijuana legalization is a major event for the state of Colorado and it's a subject we at the Western History Department are eager to add to our collection. If you were active in the fight for legalization and would like to donate your papers to DPL, please contact us at 720-865-1821 or e-mail history@denverlibrary.org.