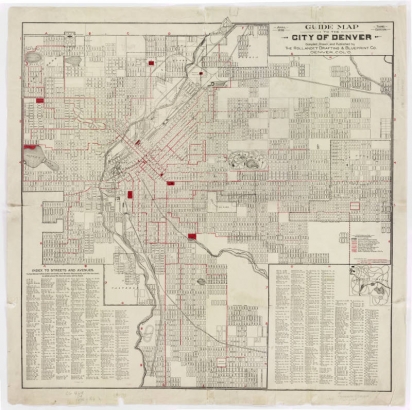 How much do you know about Denver streets, avenues, and boulevards?

If you're like most of us, you've only considered the logic of Denver's roadways in passing, usually while driving and randomly thinking, "What is Galapago Street named after?"

Or maybe it's after a passionate argument with a Denver native who insists that Zuni Street is pronounced "zun-eye" and that the Indian tribe is pronounced "zoo-knee?" But if you've ever spent some time with local historian Phil Goodstein's relatively compact, but factually dense, Denver Streets: Names, Numbers, Locations, Logic, you'll walk away with a much better understanding of the quirks and intricacies of Denver streets.

First published in 1994, Denver Streets was conceived as an article for Colorado History, but quickly turned into a full-blown book all its own. Goodstein, who was surprised by the book's commercial success, published a second edition in 1995. He's also the first person to admit that, due to the myriad of quirks, intricacies, and general confusion that defined the development of Denver's roads, Denver Streets is an imperfect volume. That said, the book is incredibly useful for anyone with even a passing interest in how Denver came to be Denver (and it's one of the most used reference resources in Denver Public Library's Western History and Genealogy (WHG) Department). 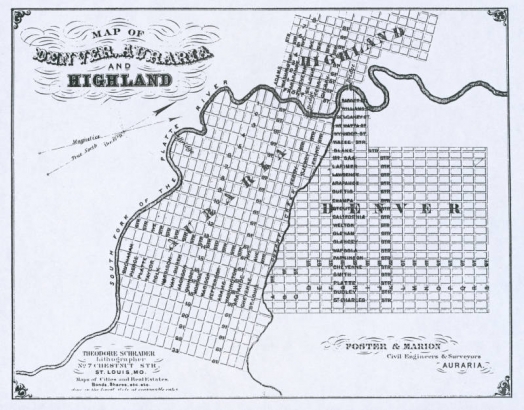 1859
Map of Denver, Auraria and Highland

The Origins of Denver Streets

"In part, it was a legacy of my father making up stories about the streets as we rode about the city when I was a boy," is how Goodstein describes the genesis of his book. But once he started researching, it was pretty clear that he'd come across a very deep and challenging subject that would require all of his skills as a researcher. "It was soon obvious that there was a pamphlet on the topic, if not a book. Before long, I was spending afternoons in the city engineer’s office where I examined countless 19th-century maps and plats of neighborhoods."

The more Goodstein dug, the more Byzantine Denver's street layouts appeared. Time and time again he'd stumble across multiple spellings of the same street and strange doings that were the result of a "chaotic street system." Part of the confusion of Denver streets was brought on by the fact that what we know as Denver today is actually a conglomeration of defunct municipalities (including Auraria, Highlands, and Welby) that didn't coordinate the layout of their towns.

For example, Auraria's streets were aligned with Cherry Creek, while Denver's streets lined up with the Platte, even though both towns based their layouts on a north/south grid. (It's also worth noting that both bodies of water take very different paths through Denver today than they did in 1859.) But neither Denver nor Auraria's grids conformed to what the federal government wanted from new territories: a more formal east/west style—which is what developers like Henry Brown introduced when they laid out areas such as Capitol Hill.

But not every developer, or mapmaker, was as fastidious as Brown. They created odd-sized lots and blocks, changed street names at will, and generally operated without any consistency whatsoever. "These different street patterns are still most visible. Often where streets jog, one real estate subdivision is ending and another is beginning," Goodstein says. "This is evident along Colfax Avenue where frequently the streets on one side of the boulevard do not directly connect with those on the other side." 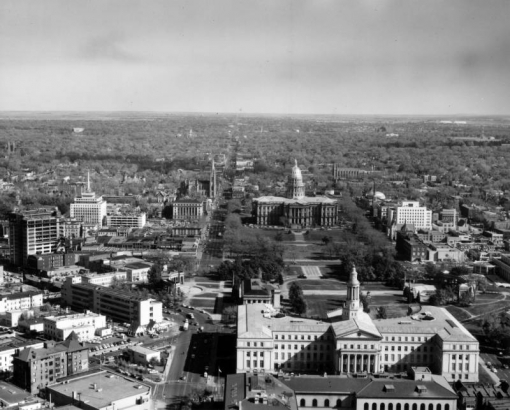 Denver Streets is teeming with examples of chaos and inconsistency, but beginning in the 1870s, several efforts were made to tame the disorder and deliver something like a coherent grid.

One of the greatest challenges for city planners was corralling Denver's avenues, which were an unintelligle mess. An 1871 plan tried to bring together numbered streets and numbered avenues. (Adding to the confusion was the fact that many numbered avenues had been renamed for prominent people. For example, 17th Avenue was once named Brown Avenue after the developer.)

The new system specified that the avenues would correspond with the numbered streets, i.e., 17th Avenue was defined as the road running east from 17th Street at Broadway.In other words, First Avenue was not arbitrarily chosen as the first avenue in town because it is the first road north of the Denver Country Club as is sometimes thought, rather, the number avenues started with 17th Avenue and counted down block by block for 16 blocks on the east side of Broadway until a first avenue was reached.

In this cacophony of streets and avenues, an actual voice of reason emerged in the form of a Dutch-born mapmaker named Edward Rollandet. Rollandet's work was so authoritative that city officials sometimes codified formal street names based on it. Goodstein cites him as a "premier" source of information about Denver streets and the staff at WHG can attest to the quality of Rollandet's work.

As the 19th century drew to a close, Denver was still annexing nearby municipalities. Streets that had once cut through multiple towns often retained their old names, meaning a street could change names multiple times as it headed across town. This was a major problem for the Denver Union Water Company, a private provider of water services. More specifically, the company's bills and installers were not always going to the right address.

To combat this problem, a bookkeeper at the company named Howard Maloney proposed a major overhaul of Denver street names that would, among other things, make certain that continuous streets retained their same name all the way across town. Maloney is also responsible for instituting street name series, such as the Indian tribe series (Arapahoe, Bannock, etc.), and the great Americans series (Wolcott, Hooker, etc.).

City planners liked the idea so much that they codified it into law via Ordinance 19 in 1904.

While Maloney's system introduced true order to a very chaotic system, it was rife with quirks that seem to defy logic, as Goodstein notes in incredible detail. For example, why is Jason Street, which is named for the Jason of antiquity, the "J" street in the Indian series?

Making Sense of It All

The story of Denver's streets takes as many twists and turns as the streets of Denver. But Goodstein has done a phenomenal job of tying the whole story together. Particularly interesting are the sections on "Yesterday's Streets," which methodically trace the voluminous changes Denver street names have taken over the years.

As much as anything, Denver Streets: Names, Numbers, Locations, Logic showcases the incredible contributions that local historians make to the communities they research and write about. This particular title serves historians, land developers, and plenty of regular folks who simply want to learn more about their hometown.

This is extremely interesting and now I'll have to get my hands on Mr. Goodstein's book. Thank you for helping our wonderful history come alive.

Thanks for the kinds words, H! Denver Streets is currently out of print, but there might be a few used copies floating around. Phil is currently working on a series on the history of Denver Public Schools that looks great! Thanks for reading and commenting!

Such an important book for Denver research.

Seriously, it gets used so much in our department (it's one of the few titles we can justify having four copies of so that future generations can benefit from it, too).

Very valuable source, this book.
Is there any mention of the naming/unnaming of Gene Amole Street (or Alleyor Lane or whatever)?
The Queen City Of The Plains needs to have a Gene Amole Street.
Why did this section of 14th st become obsolete so soon after the honors period following that wonderful human's passing?

Hi R.H. - We agree with your assessment of Denver treasure Gene Amole. It seems as though Gene Amole Way was consigned to the dustbin of history when the RMN Building was bulldozed to make way for the new County Jail. That said, it wouldn't hurt to name another street after that fine journalist. Thanks for reading and commenting!

A good choice for a J name in the Indian series would have been Jicarilla. But that would have been another one for mis-pronunciation along with Acoma and Zuni. On the other hand, San Francisco has never determined the correct pronunciation for that city's Gough Street.

Thanks, Brian, for your interesting topics.

Thanks, Charles! Those street planners will keep historians and bloggers fully employed for decades!

In the late 1880's into the 1890's Warren E. Knapp lived on SOUTH 10th and 11th Streets. What are these streets named now, since numbered streets are now avenues?