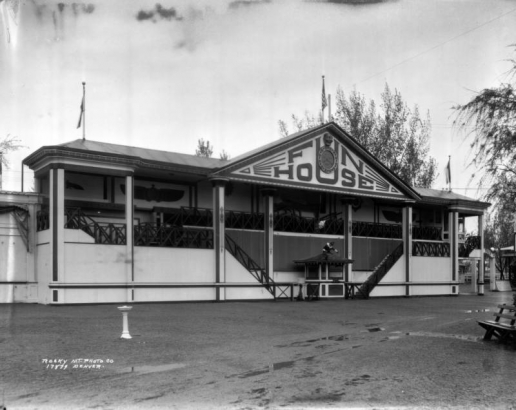 In its 108-year history, Lakeside has played host to a number of rides, but few are as memorable as its unforgettable funhouse. This collection of bone-crushing attractions included a floor-mounted spinning disc that hurtled riders across the room, blasts of air designed to lift women's skirts, and host of other devices that would induce migraines in a modern insurance adjuster.

One particularly memorable feature, that does not appear in this 1925 photo, is the legendary Laffing Sall. Sall was an automated papier mâché figurine that stood perched atop the funhouse bellowing out an unending and terrifying cackle.

If Sall gave you nightmares as a child, we feel it's only fair to warn you that there are plenty of other Salls floating around the amusement park world. Laughing Sall was produced en masse by the Philadelphia Toboggan Company and is still on display in various museums and amusement parks across the country.

One place you won't find Sall anymore is at an actual funhouse. When Lakeside shut down its funhouse in 1986, it shut down the last known funhouse of its kind in the United States.

While Lakeside Amusement Park may lack a funhouse, it's hardly lacking in history and beautiful old buildings, as generations of Denver families can attest to.

Great post, Brian! Ah, how well I remember Laffing Sall--hearing that evil laugh, stumbling around trying to navigate the Fun House as a terrified six year old--in an about to 'pee-my-pants' kind of fear. Sure felt like she was laughing only at me. Indeed, just the faded memory still gives me chills. Thanks for the walk down memory lane

Glad we could job your memory Leigh Ann! Hope we didn't induce a visit to the psychiatrist as well!

Some of my best childhood memories are of Lakeside's Funhouse. The crazy, almost free-fallingly steep slide, the moving floors, the spinning disk, the monkey cage and more. It was a wonderful place where, for better or worse, fun trumped safety every time.

That slide was definitely a test of bravery. Also, we love that line about fun trumping safety! (A few skinned elbows never hurt anyone too badly!)

I too enjoyed all of those attractions and devices, including Laughing Sal, whom me and my brother new as "Florence", as we thought she looked like our landlady at the apt. we lived in as children. I saw her again as an adult at Cliff House, on Ocean Beach, San Francisco, but now I see it may, or may not, actually have been her.

HI Frank - You most likely did see her at Ocean Beach. Sall was mass produced and terrified children (and adults) across the entire country!

Yes, I was haunted by laughing Sall also! We lived just below Inspiration Point. My Mom made complaints about Sall's volume, and had her turned down. I kind of miss her now though!

HI Pat - Thanks for sharing that memory. We're not quite sure how you ever slept with Sall's cackling in the background, but we're very impressed that you did!

Thanks Brian for the Fun House memories. I too, like Leigh Ann experienced nightmares from Laughing Sal and still have them occasionally to this day. As a visiting teen from Littleton, the Fun House was our "scary" adventure. Standing outside with Laughing Sal, all we could hear was her laughing and all the screaming from inside. The whole fun house experience set me up for my life of adventure today.

Hi Bonnie - Thanks for sharing your memories of the Lakeside Funhouse (talking about these things is very therapeutic!). We were especially disturbed to find out that there were Laughing Salls all over the country and that some of them are still in operation(!).