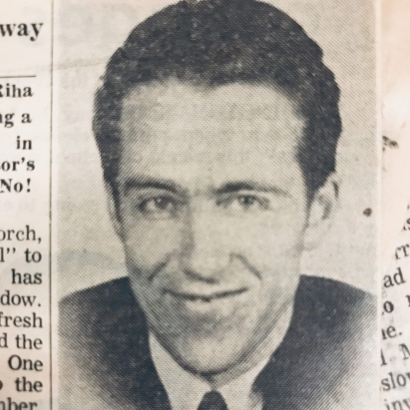 This is the story of the disappearance of Professor Thomas Riha.

From all accounts, Professor Thomas Riha was known as an introverted, neat and precise man who was a stickler for Russian grammar. He married a young woman also from Czechoslovakia, but their marriage soured very quickly. His wife admitted after his disappearance that the marriage had been "arranged in haste," and they had been ill-suited for each other, adding yet another veneer of spy thriller to this story.

On the night of March 15, 1969, Thomas Riha went missing. That much is known. The circumstances under which he left Boulder are unknown. What is also known is that investigators found his home in disarray, in direct conflict with the orderliness that he was known for. Did he leave his home in this state because of a hasty departure under his own steam, or was this the evidence of an ambush and kidnapping? Alas, no one knows for sure. (Or, rather, someone probably knows for sure, but it’s classified.)

At the center of this mysterious disappearance was a woman with a dubious past named Galya Tannenbaum. Tannenbaum had prior arrests for forgery and was a person of interest in the poisoning-by-cyanide of a Denver man who had named her as the sole beneficiary of his estate. Another woman, who died by cyanide poisoning a few months later, also named Tannenbaum as the beneficiary of her possessions. Obviously, the police became suspicious and executed a warrant to search Tannenbaum’s home. There they found forged documents signing the title of Thomas Riha’s house to Tannenbaum. Tannenbaum was arrested and charged with forgery, and she pleaded not guilty by reason of insanity. She was committed to the Colorado State Hospital psychiatric ward, where she committed suicide by cyanide.

Rumors and speculation spread across Boulder and Denver. The FBI got involved, and so did the CIA, but in the end no definitive answers were ever provided⁠—even after a hearing with the U.S. Senate Intelligence Committee. There were reports in 1973 that Riha had been sighted in Czechoslovakia, but after several years his friends were certain he was dead and disposed of, and he was officially declared dead in 1978. But the question remains as to whether or not he was involved in espionage for the USSR, and whether that might have had anything to do with his disappearance.

Would you like to learn more about this case? Maybe even take a crack at solving it? You can view our biography clippings of Thomas Riha and Galya Tannenbaum in the Western History and Genealogy Department. And don't forget to comment below about your theories.

This post has been edited to amend partially misleading information. The newspaper quote regarding Dr. RIha's marriage reported that the marriage was "arranged in haste," not that it was an arranged marriage, as our post originally stated.

In 1952, Thomas Riha was a private soldier in Fort Bragg, NC in the 14th Radio Broadcast & Leaflet Battalion, known as Psychological Warfare.

Intriguing. Thanks for sharing, NK!

This is group of documents released by the National Archives between 2017-2018 that focuses on Dr. Thomas Riha.

Thanks for sharing, Clayton!