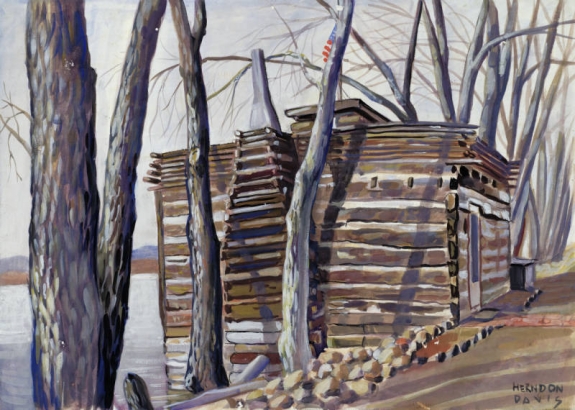 Sometimes a story just grabs you and won't let go. For me, it started with a seemingly innocuous Instagram post that led down to a labyrinth of epic proportions. A simple question from a single follower on social media forced a serious dive into the murky roots of this city. Such tales must be told and such research must be shared, so buckle up and enjoy this convoluted story of Denver's first hotel.

On February 1, 1859, the El Dorado Hotel (or Eldorado Hotel) officially opened for business under partners David Smoke and Count Henri (or Henry) Murat. David Smoke appears to have been a fairly unassuming fellow, but the Murats made quite the splash. The “Count” claimed to be a French nobleman related to Napoleon while his wife Katrina was sometimes described as the first woman in the territory (close, but no cigar).

The hotel was located on the corner of what is now 10th and Larimer Streets. Though technically outside of Denver City at the time, its location in Auraria makes it the first public house, or hotel, in the area that we now know as Denver. It beat the larger Denver House, located on Blake Street near 15th, by just a few months. The El Dorado Hotel was hardly four-star accommodations, consisting of a dirt floor, canvas partitions and beds of boughs, mattresses and buffalo robes.

The partnership between Smoke and Murat lasted only a few months before the Murats moved to Denver City to open a saloon. Before the year was out, Smoke had pulled up stakes as well. By August 1859, Henry and Theresa Humbell were renting the cabin and operated the Union Bakery out of it until 1863. The cabin was ceded to the government or was sold for back taxes on multiple occasions after that.

In 1877, Professor O. J. Godrick wrote in a Rocky Mountain News column that the building had burned down. However, William B. Vickers notes in his History of the City of Denver, Arapahoe County, and Colorado (1880) that “The building still stands...or did a short time ago,” and a 1913 Municipal Facts article refers to the building as extant and “now known as the ‘Files House’.” From there, the site of Denver’s first hotel disappears from the historical record. 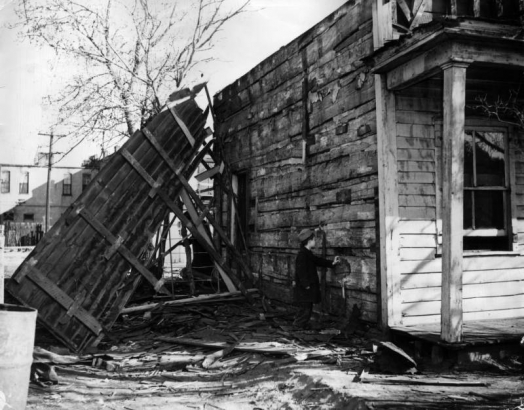 The story remained dormant for decades until a bright January morning when, like a phoenix, it appeared to rise from the ashes. In January 1939, a fire burned out the lean-to kitchen of Techla Geinger’s kitchen. Taking the story from bad to worse, the city building inspector said it was “just another old frame sack that ought to come down,” and workmen were sent to raze her home. However, when the wrecking crew began to strip off the weather-beaten siding of the house at 1249 10th Street, they were shocked to find a rough-hewn log cabin hiding underneath. Work halted and the story quickly circulated that this was the “Murat cabin” of historical lore, apparently confirmed by reports of a title abstract from the year 1859.

Over the next few days, the cabin’s future remained in question. “I don’t see why we should give the cabin to the city,” said owner Techla Geinger. Fair question, Techla. Curators for the Colorado Historical Society wanted to preserve it, and the city offered to let it stay in its location, but neither had the funds to purchase the property. With the city and state unable to pay an agreed-upon fee, the cabin instead went to May Bonfils for the low, low price of $3,500 (plus moving costs).

Daughter of the Denver Post founder and a prolific local philanthropist in her own right, May Bonfils had the log cabin moved log-by-log to her Belmar estate. When the cabin was rebuilt on the estate, its logs were chinked with concrete and the interior was remodeled for comfort. There, it stood on the bank of the lake as Bonfils’ own private retreat. Following the adage, “better late than never,” Bonfils (by then May Bonfils Stanton) stipulated in her will that the cabin be transferred to the Colorado Historical Society after her death. 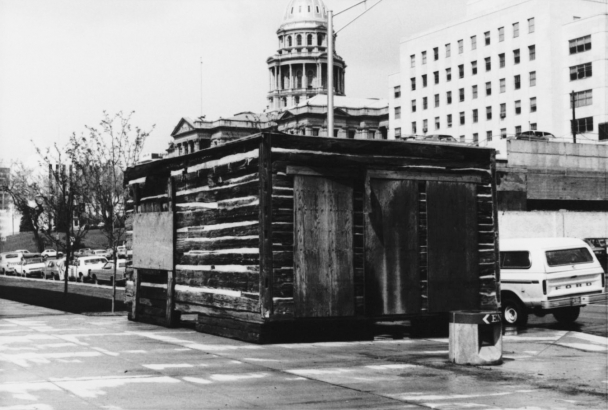 It is at this moment that the story of the Murat Cabin takes its second major turn. At some point after receipt, the Colorado Historical Society hired Long Hoeft Architects to investigate the cabin and its purported backstory. The firm checked directories, photographs and land records before declaring that the cabin was (to everyone’s dismay) a different early Denver cabin, built at about the same time and in about the same location as Murat's. An example of early Denver plank construction, the three surviving walls were put on display in the Colorado History Museum along with a plaque that included much of the sordid story. Though now in off-site storage, the cabin (such as it is) can still be found on History Colorado’s online catalog, along with photographs of its indoor display.

Despite all of the disappointment, this cabin will likely stand as one of the oldest surviving buildings in Denver. Additionally, while the structure of Denver’s first hotel may have been lost to history, the cabin’s “rediscovery” led to a furor of renewed interest in the El Dorado Hotel and its early proprietors. The Murats wouldn’t have had it any other way.

Interested in learning more? Much of the research for this blog was pulled from our Clippings Files and Western History Subject Index. Additional information came from Jerome C. Smiley's seminal History of Denver as well as Linda Groth’s paper on the El Dorado Hotel.

So, as with the fabled city of the same name, no one has yet rediscovered this El Dorado.

Very astute comparison! At least we have the stories.

Thanks for sharing this story!

Glad you liked it. Thanks for commenting!

Love the story,pictures.....I am a custodian at BCL...I am a local history lover,it would be a dream to work with yall

Glad to hear from you! It's definitely a great thing to get to work with these collections and this history every day.

I too have researched the Eldorado Hotel fairly extensively, driven primarily from my attempted genealogical research in who was David Smoke. My family is centered in South Carolina since the 1740's. The original settler's name was Rauch, then anglicized to Smoke and Smoak. Do you any info on what happened to
David Smoke and his wife? I've only seen one small reference that Mrs. Smoke went to Montana. It would be fun to sit down together and compare notes.
nasmoak@msn.com

Thanks for reading, Neil!

We don't have much on Smoke, and it doesn't look like we have anything to add to your research at the moment. There is a reference in our subject index to a Denver Times article from December 30, 1900, but unfortunately, we don't have access to the microfilm at this time. We'll take a look when we're back in the library and send that article to you in case it has added information.

My family owns house that Countess Murat built in Palmer Lake. I am interested in any Katrina or Henri Murat details you have. She was the first person to sew and fly the American Flag in Colorado. Katrina died in the house in March 1913 and I am also wondering if she is in the Women's Museum in Denver. Thanks, Brian Middendorf

Thanks for commenting and asking! I have added your request to our reference queue so you'll be receiving an email from us shortly.