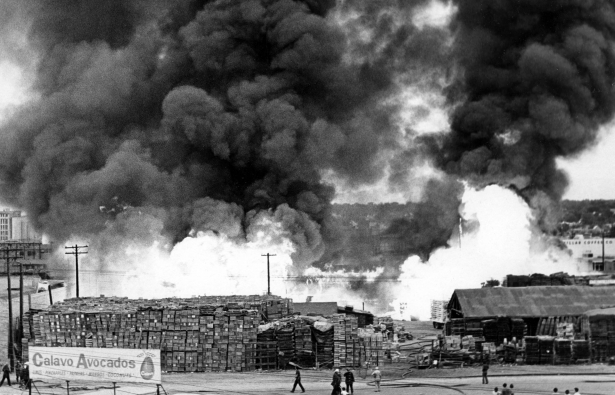 The Denargo Market fire on Wednesday, July 7, 1971, was a whopper! The spectacular blaze rose hundreds of feet into the evening air, caused thousands of dollars worth of damage, and was visible all over the city, bringing thousands of onlookers to the site. It was a four alarm fire, in which firefighters were hampered by the lack of fire hydrants in the area and a loss of water pressure. Aerial snorkel trucks were called in from Englewood and Arvada to help the 200 Denver firemen battle the fire, which raged out of control for more than two hours. Over 50 Denver Police officers were on hand to help move traffic and handle the crowd. This was the worst fire in Denver since September 3, 1962, when a four alarm fire destroyed the Albany Hotel at 17th and Stout Streets (Rocky Mountain News, July 8, 1971, p. 5).

This was the worst time for any type of disaster such as this, because the Denargo Market had such a large inventory of boxes and supplies on hand for farmers, being at the height of the packing season. Not only did the firemen have to battle the fire to save businesses in the market, there were also other hazards. There were two railroad tank cars filled with carbon dioxide, and there was a fear that the heat of the fire would build up pressure, and the tank cars would explode. There were 50 kegs of black powder in a nearby warehouse, which firemen moved safely away from the flames. Plus, 13,000 volt power lines cut through the area, which Public Service quickly shut off. Fortunately, no one was killed, and while the blaze was terrible, it could have been much worse.

This was not the first fire at the Denargo Market. On December 16, 1952, the market was almost totally destroyed by a fire that gutted one major distributing company and caused an estimated $325,000 damage. The two alarm fire was touched off when a portable oil stove overturned, and oil spilled and ignited. The fire spread to a 50-gallon oil drum, exploding it and spreading the fire beyond immediate control.

The Denargo Market dates from 1939, when a group of angry produce growers and the Union Pacific Railroad joined forces to develop an area where growers could sell their produce. There were 300 steel market stalls and a brick office building, and later a poultry and egg market was opened as well. On May 20, 1939, the Denver Food Terminal Market, as it was officially named, was opened amid an evening celebration that attracted over 30,000 Denverites; W.M. Jeffers, the president of the Union Pacific Railroad; and three private railroad cars of other railroad dignitaries.

Today, the market is no longer there; it was replaced by The Crossing at Denargo Market apartment complex. If you'd like to find out about other interesting Denver historical news, like us on Facebook! 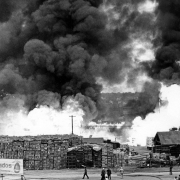 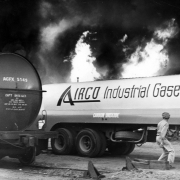 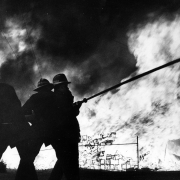 Very interesting! Thanks for posting.

I was in Denver at the time and the city was filled with the scent of burning food.