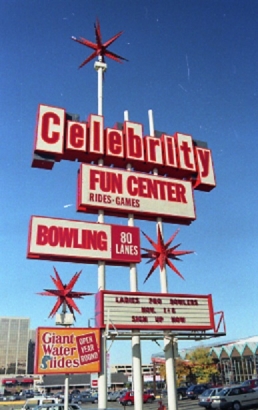 Colorado has long been a testing ground for new ideas in recreation and entertainment. Today, we see the much-hyped and developing project of Meow Wolf, but we’ve also seen examples in the original Elitch Gardens, Santa’s Workshop,  Colorado's ski industry and the Cinerama at the Cooper Movie Theater, to name a few. The early 1960s dawned with a new experiment in amusements in Denver, launched in part by Walt Disney (yes, that Walt Disney) whose Celebrity Sports Center offered a fun time for all.

The Celebrity project, initially begun as “Celebrity Lanes,” was a cross between a recreation center and an indoor amusement park, and felt a bit like a small city. It was designed to provide families, and in particular children and teens, with amusements year-round. True to its name, Celebrity brought many Hollywood investors to town and was meant to be an initial foray into a chain of nationwide recreation centers.

In 1960, Celebrity Sports opened on a 7-acre lot at 880 S. Colorado Boulevard in Glendale, and it remained in operation until falling victim to progress in 1994, closing to make way for big box stores.

While Celebrity was much-loved by Denver families, as an experiment it had mixed results: the national chain never materialized, the celebrities and Disney eventually divested and sold and the center ultimately closed in 1994. None of these details mean Celebrity Sports was a failure, however, as ultimately it enhanced the lives of countless Denver youth (and young at heart) for over four decades. 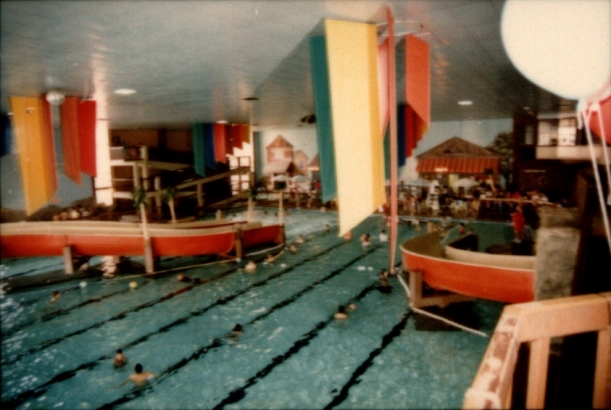 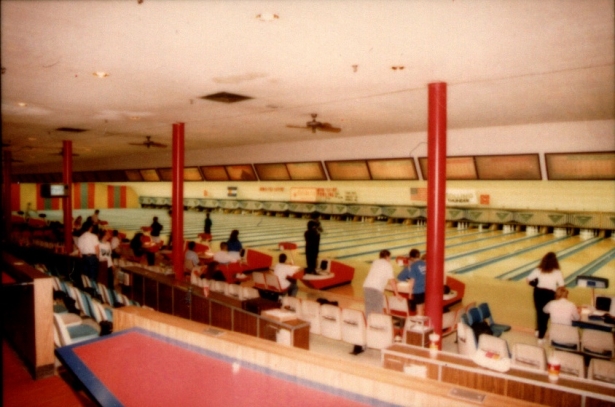 In the late 1950s, hot on the heels of the 1955 launch of Disneyland in Anaheim, California, Walt Disney was seeking new locations for experience-based entertainment. Researching the conditions in several American cities, he landed on Denver as having the perfect formula for a new indoor recreation spot: scant options city-wide for indoor activities, cold and snowy winter weather and a growing population base and economy. 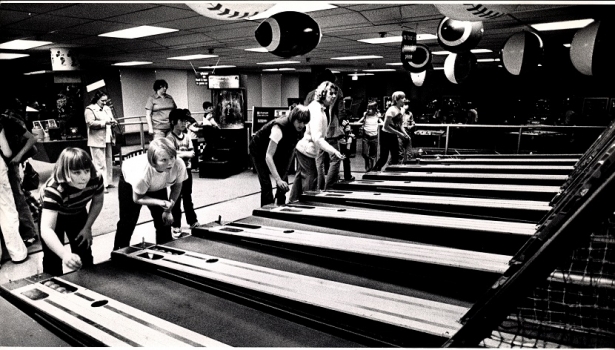 The ground-breaking for Celebrity Lanes was held on December 7, 1959, at the Brown Palace Hotel. It featured enthusiastic speeches by several of the twelve original investors, among them comedian Jack Benny, musician Spike Jones, and Disney himself. Other big-name investors included businessman Roy Disney, crooner Bing Crosby, actor Charles Laughton, singer and actor Burl Ives, and comedians George Burns and Gracie Allen. While hyping the ambitious project, Jack Benny was quoted by the Rocky Mountain News as joking he wasn’t “going to miss an opportunity like this to turn a buck.” 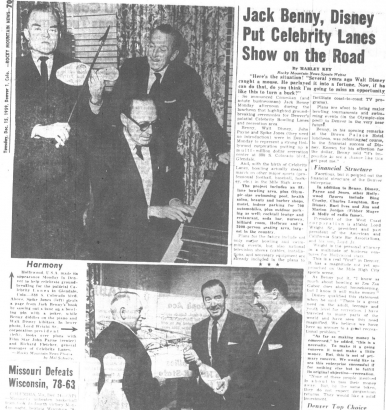 In the midst of a nation-wide bowling craze, the Celebrity idea began as a giant bowling alley, but it quickly grew to include the giant 9-lane pool, arcade, several restaurants and a cocktail lounge, a motel (this never materialized) and “parking for 700 automobiles.” After securing A-list investors and a California-based architecture firm (Powers, Daly, DeRosa AIA), the Celebrity Center went up in stages over the next two years.

Beginning at 123,000 square feet of space and an initial cost of $3.1 million, the project eventually hit costs up to $6 million as Disney built additions through 1961. For comparison, according to the U.S. Bureau of Labor Statistics, that initial $3.1 million would be approximately $26.7 million today.

According to 1961 newspaper reports, in addition to the largest bowling alley and indoor pool in Colorado, the center also included “…a coffee shop, an English pub dispensing 3.2 beer, an 8-table pool room, a large and sun-lit nursery with gleaming new toys…and a barber shop and beauty salon.”  An additional feature for the kids was a pink and white ice cream parlor with “flaming sodas” that really committed to the bowling theme; they offered ice cream concoctions with names like “King Pin,” “Strike” and Spare.”

For fine dining, the center offered the Celebrity Room and Lounge, which was a dark-paneled dining room plating up high-end meals, including steak and lobster. The restaurant was capable of seating 254 diners and featured stylish design aesthetics, including indoor rock- and moss-landscaped walls and a circular fireplace with flames flickering over a bed of sand. Perhaps the “giant jewels used as dining room lighting fixtures” might have been a bit over the top. 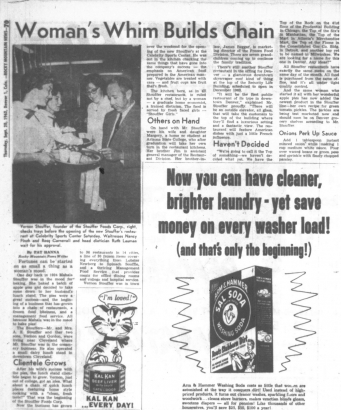 Disney experimented with various restaurants over the years, from a Hofbrauhaus to a Cart ‘n’ Rib, from Stouffer’s Top of the Rockies to Casa Donato. A rather amusing Rocky Mountain Journal restaurant review of the Casa Donato shared, “The waiters are pleasant, garrulous, and spin great yarns about the restaurant’s name. ‘It comes from an old village in Calabria, or maybe from the owner’s mother-in-law.’ ‘Really?’ ‘Nope, [I] just made it all up.’” 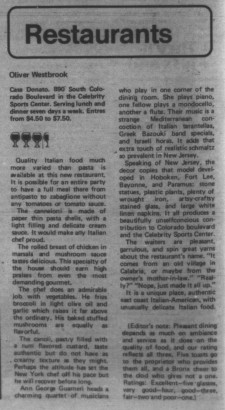 The pool itself attracted quite a buzz, as it was the largest of its kind indoors in this part of the country, measuring 164 feet and 1 inch by 75 feet and 1 inch; the 1 inch was to allow for pool contraction, while still maintaining Olympic-sized standards. The pool was the Sports Center feature that opened last, but for eager Denverites it was worth waiting until July 1961. It was designed with nine lanes, as opposed to the eight that were then the standard, and it was equipped with five diving boards, including both one-meter and two-meter high boards. The pool held 500,000 gallons of water, constantly filtered and heated over the thirteen swimming hours it was open each day. 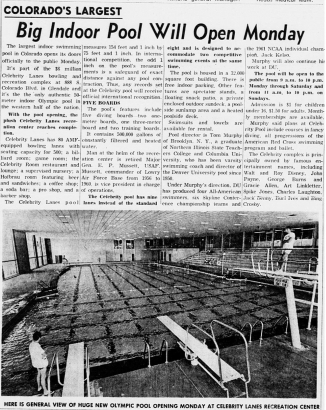 The larger pool complex contained ample “spectator stands, a floating snack patio, a private enclosed outdoor sundeck, a poolside sunlamp area, and a heated poolside deck.” Admission was $1 for kids ($1.50 for adults), and both towels and swimsuits were available for rent (despite the questionable hygiene of the latter offering). Celebrity offered swimming and diving lessons, and even a couple of indoor regattas in 1976 and 1977! The water slides for which Celebrity Sports is most fondly remembered were not included in the original iteration: they showed up under the center’s second and final owners in about 1980. 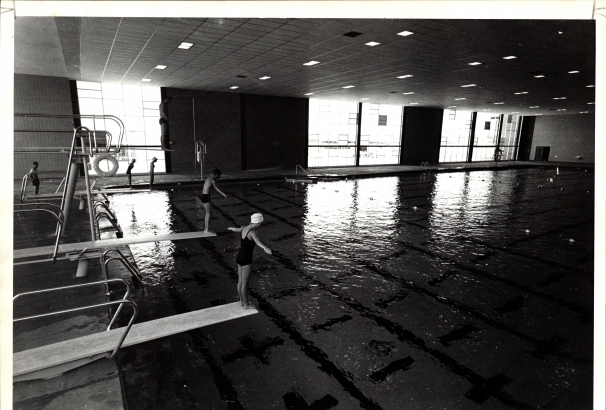 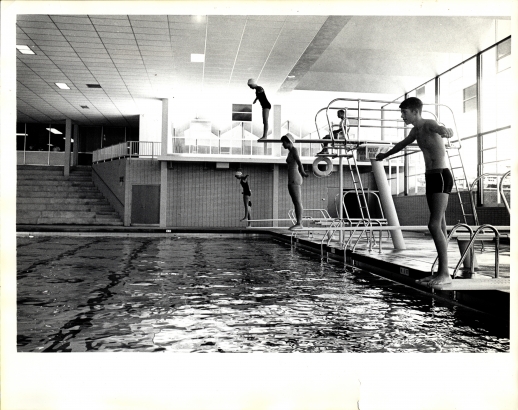 While Celebrity Sports Center made a huge splash with Denverites, after just a year and a half Hollywood investors felt lukewarm on the proceeds. Walt and Roy Disney bought out their colleagues’ shares in 1962, and continued to experiment with the formula for the business. Various sources report that Disney used Celebrity as a training ground for management staff destined for the larger amusement parks in California and Florida.

Although Celebrity Sports Center did not meet the initial wild financial expectations, it was profitable enough for the Disney Company to continue tinkering with their experiment even after Walt’s death in 1966. However, in 1971, the company shifted focus instead to its Florida projects Walt Disney World and Epcot Center. In 1979 they sold Celebrity Sports Center to bankers Neil Griffin of Texas and Bob Leavitt of Denver, and Denver real estate investors Russell and Dirck Writer.

The new owners committed to keeping a good thing going while adding their own improvements: an expanded videogame arcade and an attached Village Inn pancake restaurant. Perhaps their greatest contribution to Celebrity Sports Center were the multi-story waterslides they added to the pool shortly after purchasing the complex. The names of each slide indicated how adventuresome riders should be: “the Dolphin,” “the Barracuda” and “the Shark.” 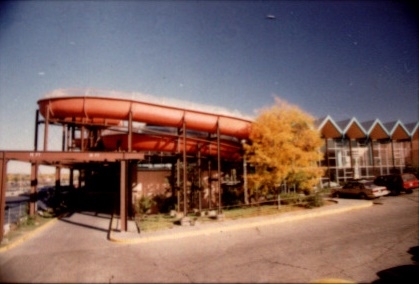 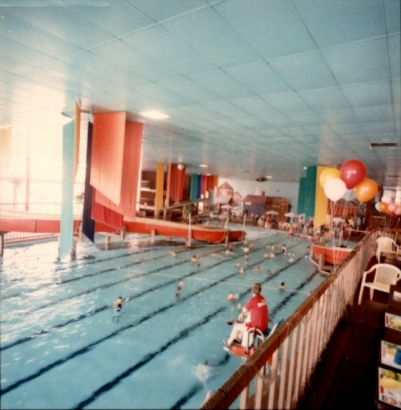 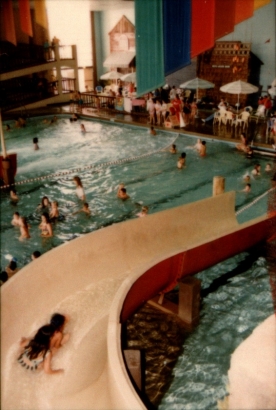 Wrapping around from the roof and into the building, through jungle scenes and waterfalls, the slides eventually deposited swimmers back into the warm pool. Denver kids from the 1980s and 1990s likely share memories of climbing the concrete ramps all the way to the top of the building to tackle the Shark, smelling chlorine on warm cement, and waiting in a line of dripping, excited kids while watching snow fall outside.

Good Times Come to An End

By the early 1990s, Celebrity Sports Center had expanded to 150,000 square feet of entertainment space, and was open more than 16 hours every day, including Fridays and Saturdays from 8:30 a.m. to 3:00 a.m.  By 1994, despite bringing in an average of a million visitors each year, the business’s profitability had dropped. The stress of constant activity was beginning to wear on the 35-year old building, and it had become a magnet for troublesome youth behavior, including a shooting in the parking lot. The Center closed in June 1994, and in 1995 it was demolished to prepare for new businesses. 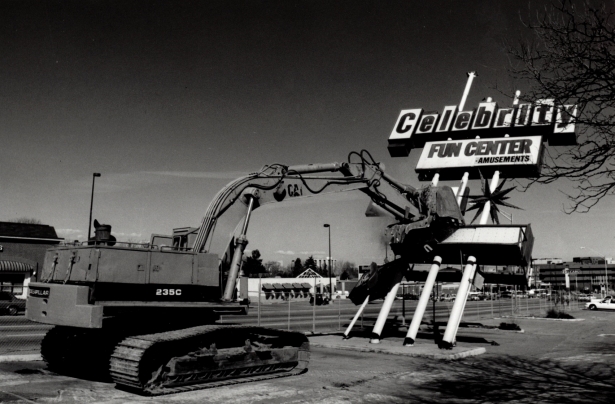 In March 1995, while the whole lot was undergoing demolition, the Rocky Mountain News quoted Glendale Mayor Steve Ward as saying it had “become a trouble spot for Glendale police….The city’s been a little quieter since it closed.” Eventually, the lot became home to big box stores, including a Builder’s Square and Best Buy (now Home Depot, Whole Foods, and Staples). The wood from Celebrity’s bowling lanes went to refurbish the ballroom floor of the Oxford Hotel downtown, and one of the famous yellow stars from the sign went to the Lumber Baron Inn.

Rocky Mountain News and Denver Post articles that featured the closing and demolition of the center all included interviews with Denverites sad to see Celebrity Sports Center go. Henry Hofman, a regular bowler since the lanes opened in 1960 quipped, “There it goes….Now where am I going to celebrate my next [97th] birthday?” Mike Yorkey, pondering Builder’s Square lamented “’What am I going to do? Point to that rake over there and say, ‘Yeah, kids, that’s where daddy bowled a 300?’”

Twenty-six years after the closure of Celebrity Sports Center, it’s still a point of nostalgia for several generations of Denver locals. While the Celebrity Sports Center experiment didn’t produce the exact results Disney and his Hollywood investors had anticipated, all of our lives in Denver were richer for the effort. 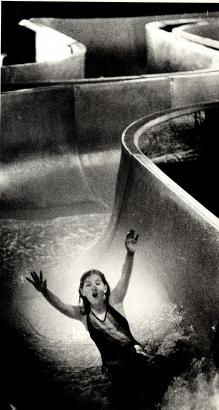 Excited for more about Celebrity in our collection?

Other entertaining reads about Celebrity

I got caught "popping credits" in the Spy Hunter machine there on two different occasions. Good times...

Ah, the digital age version of tilting the pinball machine. I'm guessing you weren't the first to do it. Thanks for reminiscing with us!

I spent so much time at Celebrity while growing up in Denver, mostly in the pool. There was a bleach foot bath you had to walk through to get from the locker rooms to the pool...pretty gross. The showers were freezing. You'd get tickets for playing a lot of the games and turn them in for crappy prizes. IT WAS AMAZING.

Hi Dana. I don't remember the foot bath, but that does sounds unpleasant. The prizes were pretty lousy, but it was so much fun to "shop" and take something plastic home! Despite being pretty kitschy (or perhaps because of it), it was indeed amazing!

I remember the foot baths! You had to walk through a 3" puddle of disinfectant is a 3' x 3' walk through between the lockers and pool. It was cold and gross and everyone tried to either jump over it or only put down one foot. I also remembered they had signs in the locker room urging swimmers to shower before entering the pool. Very stupid request to a kid, but as an adult, mandatory! I spent many a happy Saturdays at Celebrity Center in the mid seventies.

yep, i remember the cold showers, it was required before entering the pool

yep, i remember the cold showers, it was required before entering the pool

I used to go to Celebrity to bowl in the late '60s. They had a deal in the summertime, on weekdays (or maybe it was just one designated day per week, I forget) you'd pay one price and you could bowl all you wanted all day long. Mom would drop us off in the morning and come pick us up in the afternoon.

A friend reminded me that KIMN radio used to do live broadcasts from the pool area.

Hi Jude. Sounds like a fun childhood, a whole day to hang out "just us kids" at Celebrity! And yes, some of the sources I reviewed mentioned live radio broadcasts. Thanks for sharing!