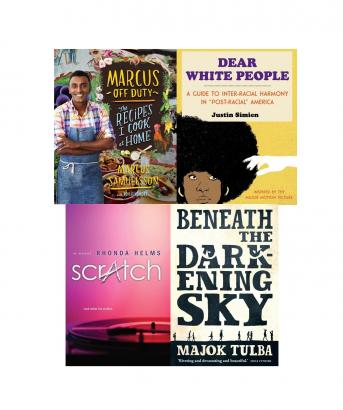 New African American Interest Books and Authors
Looking for something to read from an African/African American point of view and or written by someone from the Diaspora? Browse our list of new books available now or coming soon to the Denver Public Library. Updated monthly...check out our list for November.

Marcus Off Duty: The Recipes I Cook At Home
Marcus Samuelsson

The award-winning celebrity chef and New York Times best-selling author unwinds at home, sharing 150 relaxed, multicultural dishes. For two decades, Marcus Samuelsson has captivated food lovers with his brilliant culinary interpretations. Born in Ethiopia, raised in Sweden, and trained in European kitchens, he is a world citizen turned American success story. The recipes blend a rainbow of the flavors he experienced in his travels--Ethiopian, Swedish, Mexican, Caribbean, Italian, and Southern soul. This is an inside glimpse into how one of the world's top chefs cooks in his home kitchen for those nearest and dearest to him. More Books by Marcus Samuelsson

​In the satirical tradition of the New York Times bestseller Stuff White People Like comes this witty companion book to the "incredibly entertaining" (Indiewire) film of the same name, which "heralds a fresh and funny new voice" (Variety). Right out of college, Justin Simien wrote a screenplay about the nuanced experiences of four black students on a predominantly white college campus. Channeling the sensibility of the film into this book, Simien will keep you laughing with his humorous observations, even if you haven't seen the satiric film. Dear White People is the ultimate silly-yet-authoritative handbook to help the curious and confused navigate racial micro aggressions in their daily lives. In Theaters Now.

The most painful scars are the ones you never see. In her DJ booth at a Cleveland dance club, Casey feels a sense of connection that's the closest she ever gets to normal. On her college campus, she's reserved, practical--all too aware of the disaster that can result when you trust the wrong person. But inexplicably, Daniel refuses to pay attention to the walls she's put up. Like Casey, he's a senior. In every other way, he's her opposite. Sexy, open, effortlessly charming, Daniel is willing to take chances and show his feelings. For some reason Casey can't fathom, he's intent on drawing her out of her bubble and back into a world that's messy and unpredictable. He doesn't know about the deep scars that pucker her stomach--or the deeper secret behind them. Since the violent night when everything changed, Casey has never let anyone get close enough to hurt her again. Now, she might be tempted to try.

Beneath The Darkening Sky
Majok Tulba

​On the day that Obinna's village is savagely attacked by the rebel army and his father murdered, he witnesses violence beyond his imagination. Along with his older brother he finds himself thrown into a truck when the soldiers leave, to be shaped into an agent of horror - a child soldier. Marched through minefields and forced into battle, enduring a brutal daily existence, Obinna slowly works out which parts of himself to save and which to sacrifice in this world turned upside down.

Rainbow In The Cloud: The Wisdom And Spirit Of Maya Angelou
Maya Angelou

The Woman Who Would Be King
Kara Cooney

The Fortunes Of Africa : A 5000-Year History Of Wealth, Greed, And Endeavour
Martin Meredith

The Myth Of Race: The Troubling Persistence Of An Unscientific Idea
Robert Sussman

Try Your Luck with more book, film and music Reviews and Recommendations