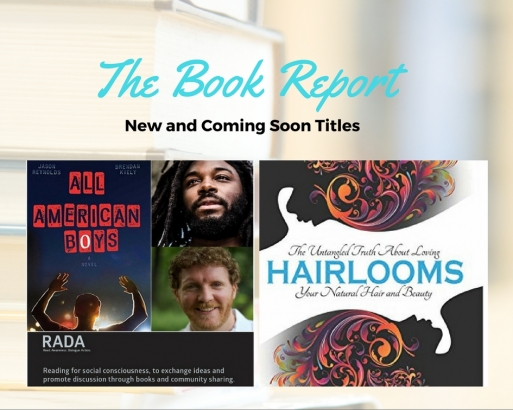 ​Looking for something to read from an African/African American point of view and/or written by someone from the Diaspora? Browse our list of new books available now and coming soon to the Denver Public Library. Book summaries provided by ProQuest Syndetics.

Featured Titles:
*All American Boys
Jason Reynolds and Brendan Kiely
A bag of chips. That's all sixteen-year-old Rashad is looking for at the corner bodega. What he finds instead is a fist-happy cop, Paul Galluzzo, who mistakes Rashad for a shoplifter, mistakes Rashad's pleadings that he's stolen nothing for belligerence, mistakes Rashad's resistance to leave the bodega as resisting arrest, mistakes Rashad's every flinch at every punch the cop throws as further resistance and refusal to stay still as ordered. But how can you stay still when someone is pounding your face into the concrete pavement? There were witnesses: Quinn Collins--a varsity basketball player and Rashad's classmate who has been raised by Paul since his own father died in Afghanistan--and a video camera. Soon the beating is all over the news and Paul is getting threatened with accusations of prejudice and racial brutality. Written in tandem by two award-winning authors, this four-starred reviews tour de force shares the alternating perspectives of Rashad and Quinn as the complications from that single violent moment, the type taken from the headlines, unfold and reverberate to highlight an unwelcome truth. The R.A.D.A Book discussion group has teamed up with Tattered Cover Book Store to bring Jason Reynolds and Brendan Kiely to Denver for a special panel discussion, February 25, 2 p.m., Central Library. Check out the calendar event for more information. More books by Jason Reynolds.

Hairlooms: The Untangled Truth about Loving Your Natural Hair and Beauty
Michele Tapp Roseman
Words have power, and those that Black women often use to describe their hair are derogatory: nappy, steel wool, out of control. They often personally inherit these terms and pass them along without even realizing the crushing effects these words have on their feelings about the person they see in the mirror. While many books on the market address the practical ways of styling Afro-textured hair naturally, Hairlooms asks: Why is it so difficult for Black women to embrace their hair? and How can Black women overcome the multi-layered challenge of embracing their natural hair and beauty? Author Michele Tapp Roseman helps readers answer these questions for themselves, to write a new story that they can pass along.

Black Against Empire: The History and Politics of the Black Panther Party
Joshua Bloom

The Most Beautiful: My Life with Prince
Mayte Garcia

Black Privilege: Opportunity Comes to Those Who Create It
Charlamagne Tha God

Return of the King: Lebron James, the Cleveland Cavaliers, and the Greatest Comeback in NBA History
Brian Windhorst