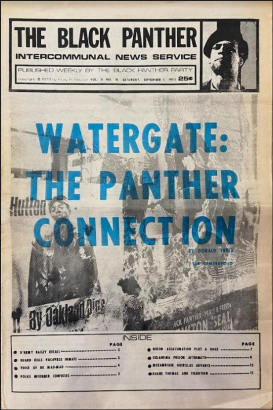 From 1967-1980, The Black Panther, the official voice of the Black Panther Party (BPP), presented a view of American life that was not represented in mainstream media. The Black Panther covered a world where social injustice and the impacts of institutional racism were inescapable parts of everyday life, and its pages contain an important historical record of life for Black Americans in 1960s and 1970s.

Though relatively obscure today, The Black Panther had significant reach during its 13-year run as a weekly newspaper. At its peak, the paper's circulation was around 300,000, which made it the most widely read Black newspaper in the United States.

Blair-Caldwell Senior Librarian Jameka Lewis spoke recently about the importance of The Black Panther and why it's a vital research tool for contemporary students, researchers, and library customers:

"At Blair-Caldwell, we strive to provide customers with primary sources pertaining to Black history and culture. These newspapers are an example of a primary source; the contents speak to the Party's programs, initiatives, thoughts from its leaders, and its coverage of major events from around the world."

One of the places covered in the pages of The Black Panther, was Denver, Colorado,  which was home to a very active chapter of the BPP. Finding a record of the Denver BPP's activities and the events that shaped their world would be nearly impossible for researchers who could only use local daily newspapers such as The Denver Post and The Rocky Mountain News. But having access to a primary source like The Black Panther opens a whole new perspective.

"When researching the Panthers, there is so much misinformation out there about them, what they stood for, what activities they were involved in, and what they thought about the things happening to Black people the time," Lewis said. "These newspapers can be used to clarify all of those things."

Newspapers are, by design, extremely ephemeral. They're not meant to be saved and there weren't many copies of The Black Panther in circulation in the first place, so surviving copies of the paper are scarce. But scarce doesn't mean nonexistent. Copies of The Black Panther are available on the collectibles market and that's where most of the papers in the BCAARL collection were acquired.

Though all of the issues in the collection show some wear, most are in much better shape than you would expect from 50-year-old newsprint. The most recent additions were purchased from a rare book and manuscript dealer in New York, who purchased from a collector in Texas.

At DPL, The Black Panther is stored in an archival-grade, acid-free box. Each issue is separated from other issues with the interleaving of acid-free tissue paper. With proper care, there's no reason why The Black Panther shouldn't be available to Denver Public Library customers for many decades to come.

The Black Panther is currently housed at the Blair-Caldwell Library (call for hours) and is available to library customers whenever the BCL Research Room is open to the public.

Thank you for all your work in getting this information to the community.