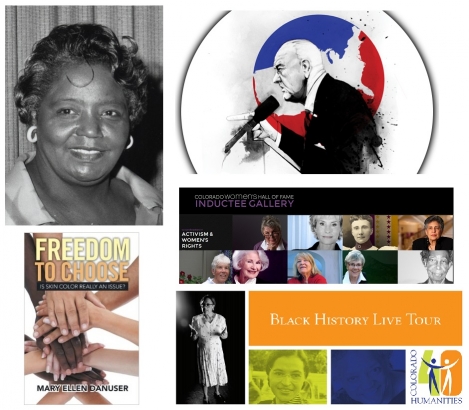 The Denver Public Library honors African American community leaders at the annual Juanita Gray Community Service Award and biennial Blacks in Colorado Hall of Fame induction ceremony. The event is held at the Ford-Warren Branch Library and kicks off the library’s celebration of Black History Month.

Juanita Gray:
Former Denver Public Library staff member and community advocate Juanita Gray helped start the Blacks in Colorado Hall of Fame in 1973, which honors new inductees every other year. Members are Colorado residents who have made an impact on the African American community. The Juanita Gray Community Service Award honors African American men, women and youth who make outstanding contributions to the Denver Metro area and who exemplify the ideals and spirit represented by Gray’s commitment to the community. A community-driven committee works with the Library to nominate and select the winner of the award and the Hall of Fame inductees.

All the Way: An Exhibit Presented by the Denver Center for the Performing Arts

All the Way vividly portrays the controversial steps taken by ambitious figures of the 1960's to pass the Civil Rights Act. Set in the pivotal year after JFK’s assassination, President Lyndon Baines Johnson hurls himself at the cause fronted by Martin Luther King, Jr., determined to rebuild the country into The Great Society that promised equality for all. Written by Pulitzer Prize-winning playwright Robert Schenkkan (The 12, The Kentucky Cycle), All the Way bowled over Broadway last year garnering the 2014 Tony, Drama Desk and Outer Critics’ Circle Awards for Best Play.

The Colorado Women’s Hall of Fame was created to recognize, honor and preserve the contributions of outstanding women in Colorado who have shaped our state and made the world a better place. The Hall is dedicated to educating the people of Colorado about these women whose courage, leadership, creativity and compassion has made a major impact on others and helped elevate the status of women.

Visit the Colorado Women’s Hall of Fame for more information on past and present inductees.

National humanities and Chautauqua scholar Becky Stone's portrayal of Rosa Parks will teach how one woman in 1955 refused to give up her seat on a bus in Montgomery, Alabama, starting the Civil Rights Movement.

There had always been an uneasy truce between black and white folks in the South. Emancipation granted citizenship to black Americans, but white Americans ended all progress by returning to slave-master protocol that was enforced by Jim Crow law. These laws went beyond segregation. They were designed to make black people feel inferior and whites, superior. By 1955, black Southerners had been oppressed as much as they could allow. They needed the right person to say “no more.” That person was Rosa Parks.

Bio
Becky Stone holds a B.A. in Drama from Vassar College and a M.A. from Villanova University in Elementary Educational Counseling. Professor Stone has performed at libraries, schools, and universities across North Carolina, as well as camps, church conferences, and music festivals throughout the south.

The Freedom To Choose: Is Skin Color Really an Issue?, with Author Mary Ellen Danuser

The Freedom to Choose tells the story of author Mary Ellen and her spouse, interpolated with the narratives of couples interviewed across the states. It offers a rare look into the lives of all mentioned couples, revealing insights and rationales as to why some people choose their mates outside their race—a portrait of motive, intent and personal choice.

Bio:
Mary Ellen Danuser served her country for 12 years in the U.S. Army Reserves as a medical specialist and an army recruiter. She is a retired insurance professional and a semi-retiree working as an independent Financial Representative at Primerica where she helps families with their financial plans. She is married to a wonderful man name John (Dakota) who is a retired Marine officer and commercial pilot. She and her husband enjoy traveling, car races, dining out, outdoor concerts, reading, walking, sightseeing, and just hanging out with each other.

For more information about upcoming events and exhibits contact the Blair-Caldwell Branch Library at 720-865-2401 or email askblaircaldwell@denverlibrary.org