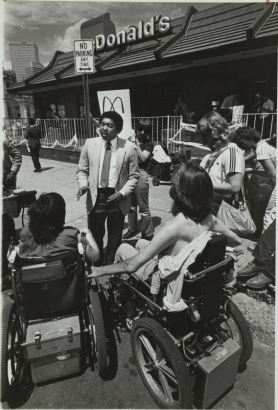 (WH2129-2022-256) Dennis Morris [back], a McDonald's Denver operations manager, talks with a group protesting lack of accessibility for people who use wheelchairs at the restaurant.
May 11, 1984
Protesters that use wheelchairs outside McDonald's
Photo News
Research News
Denver News
accessibility
Access Institute
ACCESS
ADAPT
McDonald’s

On May 11, 1984, a group of protesters raised signs and shouted, “We want access!” outside a McDonald's restaurant at the intersection of East Colfax Avenue and Pennsylvania Street. The protesters had chosen this McDonald’s because, as protest spokesman Bob Conrad put it, “[this] is one of the most inaccessible.” As they demonstrated, disgruntled McDonald’s customers stepped over protesters to get into the store. Ray Cook, a Denver businessman, told reporters, “I am sure they have a legal gripe, but I don’t think they have a right to block the door.” 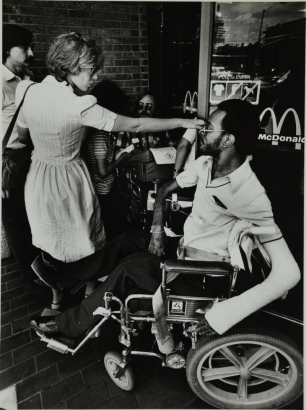 The protest was the second demonstration against the restaurant held by the ACCESS Institute (ACCESS), whose goal was to provide training to members of the disabled community in matters of activism and personal rights. Led by Presbyterian pastor Wade Blank, ACCESS grew out of the Atlantis Community, whose goal is to provide independent living for its members which would allow people with disabilities to navigate life the same way as their non-disabled peers.

As the community worked to achieve this goal, they formed the activist group ADAPT (American Disabled for Accessible Public Transit or American Disabled for Attendant Programs Today). ADAPT, founded in 1983, started as a way to encourage the city of Denver and the Regional Transportation District (RDT) to make public transportation accessible. The group participated in protests, picketing, and various forms of civil disobedience. Eventually, their dedication to the movement led the city of Denver to redesign their public transit system to be more accessible.

Once ADAPT had made progress in Denver, they wanted to share the lessons they had learned and the ACCESS Institute was born. Reverend Blank applied for grants to raise money for a training program that would bring together three members of the disabled community from four cities in other states. The goal of the program was to allow others to live and train with the members of the Atlantis Community to gain skills that had helped to make change in Denver. The Institute took place May 1-15, 1984, and included workshops, meetings, and protests. 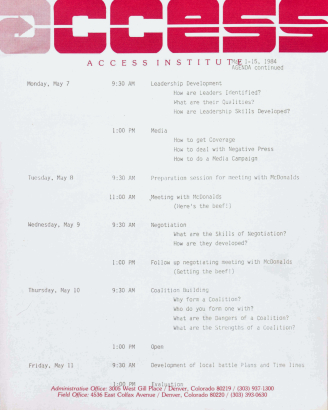 The McDonald’s protests were treated both as training and activism for ACCESS participants. There were various reasons that ACCESS chose to target McDonald’s for a variety of demonstrations held over the two and a half weeks of training. Rev. Blank said that if they could make a change with a large company such as McDonald’s, the effect would ripple to other competitors. McDonald's was the symbol of all large corporations who treated accessibility as an afterthought. If they could get McDonald’s to change, it would prioritize accessibility in other markets too.

A few days after the protest, on May 14, ACCESS met with a group of McDonald’s representatives in a room at a Denver Holiday Inn. Hopes were high as the protesters were able to voice their demands to McDonald’s executives Dennis Morris and Don Fowler and Joe Hill, a McDonald’s lawyer. Their demands were: 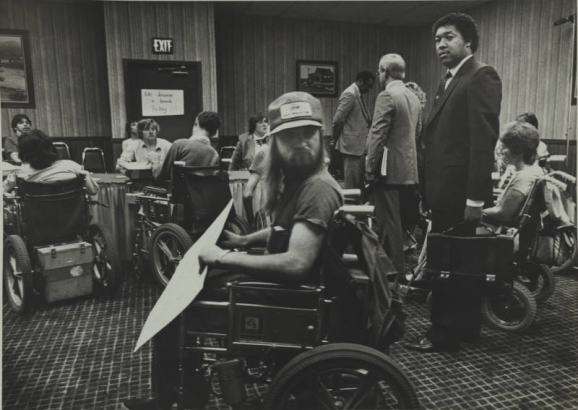 Despite the opportunity to voice their concerns, McDonald’s only response was said that negotiations would resume in 30 days. Through June, ACCESS and members of the Atlantis community continued to protest at McDonald's locations around the state.

On June 12, around 40 protesters returned to the McDonald’s on East Colfax and barred the driveway for three hours. No arrests had been made at the previous two protests. However, this time, seven people, including five who used wheelchairs, were arrested on misdemeanor complaints. McDonald’s continued to string ACCESS along, pushing off talks with the members and continuing to claim their restaurants were accessible despite the complaints.

The group was eventually scheduled to meet with McDonald’s representatives again on June 19, but the company reneged on their promise to fly the ACCESS Institute’s negotiating team, who were based across the country, to the Denver meeting. By the time of the meeting, ACCESS had sent a letter calling it off entirely. This was done after McDonald’s stated that the meeting was never for negotiations and only a discussion. Tom Glasglow, the vice president for operations and product development at the company, noted, “We can’t run our business by reacting to demands and demonstrations.”

This situation highlights many of the obstacles endured by those fighting for equal access. As members of the accessibility movement fought for the simple right to access everyday spaces such as libraries, buses, and restaurants, the movement encountered backlash and stalling. This continued even after the passing of the Architectural Barriers Act in 1984 and the Americans with Disabilities Act in 1990, which ADAPT was instrumental in helping to pass.

Despite the struggles between ACCESS and companies like McDonald’s, change has come, if slowly. A visit to the same McDonald’s today reveals an accessible entrance into the building. Meanwhile, the work that started with the members of the original Atlantis Community continues to this day. Were it not for those who decided to take a stand against inaccessible places, we wouldn't be looking toward Universal Design, ensuring that all people can access and enjoy spaces regardless of their age, size, ability, or disability.

Thank you, Michelle! This was interesting and important.