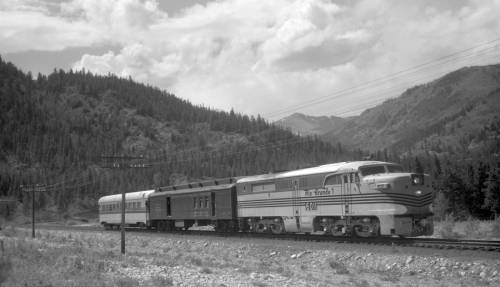 The train’s history goes back quite a bit. The Denver & Salt Lake Railway (D&SL) had, as its goal, the connection of Denver and Salt Lake City. In 1931, it was acquired by the D&RGW as it had advanced only as far as Craig. However, the D&SL built the Moffat Tunnel in 1928, giving it a direct route west. This compared to the D&RGW, whose main line west went south of Denver to Pueblo, then west through the Royal Gorge and over Tennessee Pass, then on to Salt Lake. The D&RGW realized the competitive advantage that the D&SL had with its shorter route. Ultimately, after some long controversy, the D&RGW negotiated the purchase of the D&SL in 1947 and built the Dotsero Cutoff in 1934 between its mainline tracks and the D&SL mainline.

The Yampa Valley Mail, and later the Yampa Valley, had their origins with D&SL local day and overnight trains to Craig. In 1951, daytime local trains and a tri-weekly nighttime mixed train with a coach-sleeper, between Denver and Craig were dropped, and replaced by overnight service. The replacement was part of trains #19 and #20, the western slope Mountaineer between Denver and Bond, Colorado, where the line to Craig diverged, and then was operated to and from Craig as a separate train.

The elimination of daytime service to the northwestern Colorado towns along the line frustrated people that needed that service to Denver. However, three years later, nighttime sleeping car service was dropped, and trains #9 and #10 were reinstated as daytime runs in September 1954. Not having had a train name prior to this, the renewed service was now named the Yampa Valley Mail, a name that brings affection to many who still remember that train in northwestern Colorado. 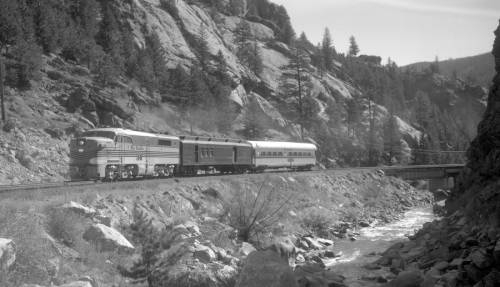 The 1960s was a sad period as more and more railroads applied for discontinuance of passenger trains, not only in Colorado but across the nation. As interstate highways grew and people abandoned passenger trains for airplane travel, along with the Post Office ending shipping of mail on passenger and mail express trains, the end was near not only for famous trains like the 20th Century Limited, but also for little trains like the Yampa Valley.

Very few people in the 1960s chose to take the train to travel from Craig and Steamboat to Denver. The ride took at least six-and-a-half hours, and sometimes much longer because it often ran late. A Continental Trailways bus required only four hours; an automobile could get there in three. After highway improvements over Rabbit Ears Pass in the 1950s, few people wished to spend long hours in a single coach railroad car with at least 30 scheduled stops and another 20 possible flag stops on the nearly 200-mile route. When the Colorado railroad commission finally allowed the train’s discontinuance, many in the Yampa Valley understood the economic realities, but many felt they were losing a great historic treasure.

The November 1963 D&RGW timetables showed a name change from the Yampa Valley Mail to simply the Yampa Valley. The downhill slide of discontinuances of well-known Colorado passenger trains accelerated as the Missouri Pacific, Denver to St. Louis, Colorado Eagle ended service in May 1966. Also in May 1966, the D&RGW Prospector ended its long run between Denver and Salt Lake City. In July of 1967, the Royal Gorge, (which, by that point, only ran as far west as Salida, Colorado) was discontinued. Sadly, on April 7th, 1968, service to northwestern Colorado ended when the little Yampa Valley ceased operation.

Today, the Union Pacific (UP) railroad owns the D&RGW and the Craig route has been built up to handle heavy coal traffic. The roadbed is in excellent condition for handling heavy coal trains.

The State of Colorado, UP, or some other entity could possibly build a profitable business running a train catering to skiers with stops in Winter Park, Bond, and Steamboat Springs. From Bond, shuttle buses could easily serve Vail and Beaver Creek. This is an especially important option to consider, as coal trains are the main drivers of the Craig branch. With coal usage down, and with power plant and mine closures on the horizon, the Craig branch may no longer have enough traffic to keep it open. If UP shuts down the line, the state of Colorado, as well as its citizens, will have lost a viable transportation alternative for northwestern Colorado, especially in this day and age of climate change and pollution worries. By having a rail alternative to travel to Steamboat Springs and other ski areas, and with strong political leadership, the little train that couldn’t may become the little train that could.

Another fine piece! Thank you!

Thank you very much. I really enjoyed writing it and wished I was around to see the train.

The automobile did indeed bring about the demise of this and other train lines... but I'd say 'Steamboat (let alone Craig) to Denver in 3 hours' by car in the '60s is a bit of a stretch. All two-lane highway through the mountains, and two passes to cross. A comparatively grueling journey, although traffic was a bit lighter :).

Even if the train took twice as long, I would have taken it!

You neglected to mention the Moffat Tunnel Property tax that was collected until the 1960's from property owners in the counties served by the D&RG. The Rio Grande wanted to drop passenger service far earlier. They were told, "No passenger service, no tax revenue". When the tax expired, the train expired.

You are correct. Thank you for mentioning this. Not only did the end of mail service put a another nail in the train's coffin, the end of the property tax and ICC sympathy for ending passenger train service was the final nail.

I was absolutely in love with train rides. My grandfather paid for me to go from Steamboat Springs into Denver for 3 summers. It was all so magical! The many tunnels fascinated me! I didn’t mind that it took longer to get to Denver because Loveland Pass could be treacherous by bus and car.

Someday I hope passenger train service would be restored. Then you and I can ride again!

My parents shipped sour cream to Denver on that train for years. In my later grade school years (cannot remember which one) the Farmers Union youth group took the train to Denver for a day of touring. Mumps were very prevalent in the valley that year. Every morning for a least a week before the scheduled trip I awoke sure that I had the mumps and could not go. The morning of the trip was a repeat. On the train I got with all the other Farmers Union group. I came home with the mumps. I was miserable.

Sorry to hear that you got the mumps on that trip. I hope the train ride and the scenery was worth it!

Who was the first baby born in Denver? The answer depends on how you ask
Ice Houses: How Early Denver Kept Its Cool
Who was the first Black Lawyer in Colorado?
Obituary For A Denver House
Jefferson Territory: The Renegade State that Almost Replaced Colorado
When Samuel Hawken Brought His Rifles to Denver