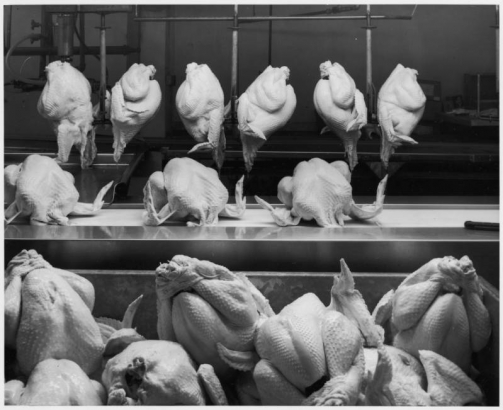 The photo collections in Denver Public Library's Western History and Genealogy Department are expansive to say the least. These collections include everything from rare historical images of Colorado's early days to studio quality pictures of dead turkeys.

While turkey photos are a mainstay of Thanksgiving decorations across the country, pictures of processed turkeys don't always make the cut. In fact, it's really fair to ask, "Why in the heck does Denver Public Library have pictures of plucked turkeys anyway?"

As it turns out, this particular photo came to DPL from the acclaimed Denver commercial photographer Lloyd Rule. Rule was a local boy, graduated from South High, and a war hero who served in both World War 2 and the Korean conflict. After serving in the European theater of operations, Rule returned to Denver where he pursued his lifelong passion for photography. He parlayed that passion into a thriving commercial photography business.

In 1989, the Western History Department came into possession of more than 75,000 images from Rule's collection, approximately 350 of which are in our Digital Collections.

Though the subject matter may seem mundane, commercial photo collections like this shine a light on subject matter that was intimately important to the people of the City of Denver during the eras in which they were taken.

Mr. Rule's collection also gives us an opportunity to take a look at our nation's preferred Thanksgiving entree in its barest form and gives us pause to be thankful...that we're not turkeys, too!

The longer I look at that picture, the weirder it gets!

Couldn't have said it better myself!