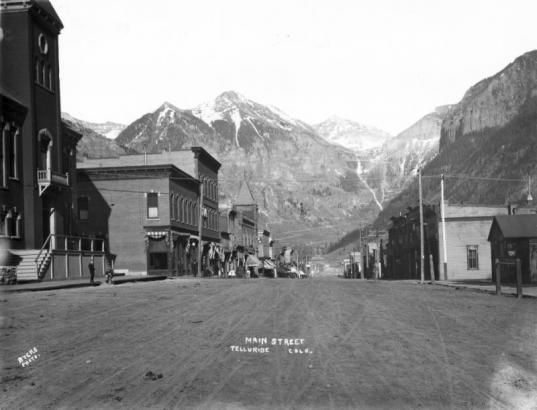 The Colorado Music Hall of Fame (CMHOF), located at the Trading Post at Red Rocks Amphitheatre, is a non-profit organization founded in 2011 to inspire music fans with the power of Colorado music history. To further CMHOF’s educational initiative, it’s been a joy to launch a CMHOF publishing imprint. The inaugural book is Telluride Bluegrass  Festival – The First Forty Years, a journalistic approach to the legendary outdoor fest’s history.

What happened in the early days of the event didn’t occur anywhere else. Sam Bush (who wrote the book’s foreword) was a trailblazer—his band, the genre-bending New Grass Revival, visited Telluride for the first time in 1975, the festival’s second year. Those guys loved both traditional bluegrass and the rock music of their peers—Bill Monroe and Jimi Hendrix.  They were vilified at the traditional bluegrass festivals of the era (playing bluegrass on electric instruments was considered heresy), but they could come together in the beauty of the Colorado mountains for a ridiculous party and a legendary “newgrass” musical ferment, joined by a generation of like-minded young musicians (John Hartford, Peter Rowan, Tim O’Brien, etc.)—a seminal precursor to the modern Americana movement.

Bush has guested every year since, playing with his heroes (Monroe, Doc Watson and Earl Scruggs) and everyone from Emmylou Harris and Bela Fleck to Lyle Lovett and Alison Krauss. New Grass Revival planted the seeds for bands such as Leftover Salmon and Yonder Mountain String Band and emerging legends like Chris Thile, who played Telluride for the first time at 12 years old as a member of Nickel Creek.

Seeing Strength in Numbers perform circa 1989 was unforgettable.  They were the game-changers in “ambitious border-blasting acoustic music,” as Thile puts it—Sam, Mark O’Connor, Edgar Meyer, Béla Fleck and Jerry Douglas. Virtuosos with their own individual careers, they didn’t perform together but a handful of times.  At Telluride, they played to 10,000 people who responded like they were the Beatles!  Telluride was the only place in the world where that transpired.

For the past decade, I have searched through every library, historical society, newspaper morgue and private collection to compile materials for this book, which contains hundreds of images from leading photographers, and over 100 interviews with an array of performers and members of the community. I hope readers will enjoy it!

Telluride Bluegrass Festival – The First Forty Years is available at independent bookstores across the state and at shop.cmhof.org.

CMHOF director and author G. Brown covered popular music at The Denver Post for 26 years, interviewing musicians from Paul McCartney and Bruce Springsteen to Bono and Kurt Cobain, and was published in national magazines like Rolling Stone and National Lampoon. Brown also covered music news, hosted, and programmed for a myriad of Denver-based radio stations. He is the author of Colorado Rocks! – A Half Century of Music in Colorado, hailed as “the Centennial state’s rock bible.” He is currently writing a book about the concert history of Red Rocks Amphitheatre.