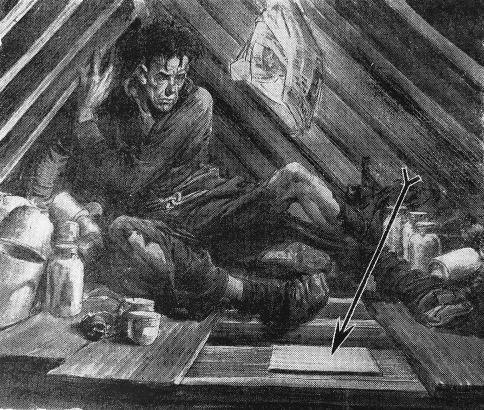 This is the story of the Denver Spider Man and the murder that perplexed Denver Police for nearly a year. Sadly, he was not a masked vigilante protecting the people of the Mile High City, swinging from webs after being bitten by a radioactive spider.

He was the murderer.

The victim’s name was Philip Peters. He was a retiree of the Denver & Rio Grande Western Railroad and had lived in his home on West Moncrieff Place for over three decades. He was married to Helen, and their children were now adults, one of whom lived in Grand Junction.

Not only was Peters a former railroad employee, husband and father, but he was also a musician and member of the Denver Guitar Club, where he and his wife sometimes gave guitar and mandolin lessons. In fact, it was through the Denver Guitar Club that Peters first met the man who would be his murderer.

For the five weeks leading up to his murder he had been staying in his house alone because Helen was recovering at St. Anthony’s Hospital after breaking her hip in a fall. His neighbors opened their homes to him in the evenings so that he wouldn’t have to be alone at dinner time, and so he could enjoy a hot, home-cooked meal and leftovers to take for his lunch the next day.

On the night of October 17, 1941, Peters discovered a tall, gaunt, and disheveled man raiding his icebox. A fight ensued, and the interloper grabbed Peters’s cast iron stove shaker and beat him to death with it before fleeing. Peters was discovered an hour later by his worried neighbors, and the Denver Police were called. They searched the house, but couldn’t find any evidence of the murderer. It was as if he had vanished into thin air.

While detectives dug into Peters’s past, searching for enemies who hated him enough to want him dead, Mrs. Peters was eventually released from the hospital and returned home a widow. A good friend of hers moved in to help around the house.

In the months following Mrs. Peters’s return, she and her friend reported strange things happening around the West Moncrieff Place house: food missing, strange sounds, things out of place. The friend was convinced the house was haunted and resigned, while Mrs. Peters decided to relocate to Grand Junction to live with her son.

So the house stood vacant, and the strange sounds and disgusting smells continued to be reported to the police, but they couldn’t find anyone in the house.

Everything changed in July 1942 once Denver Police decided to station two detectives, Roy Bloxom and Bill Jackson, outside the house and keep it under surveillance instead of waiting for a call from the neighbors. The vigilance paid off when Bloxom and Jackson spotted a man inside the house. They ran inside, but the house was empty.

Until they heard a noise upstairs.

They opened a closet door just in time to spot a pair of legs disappearing up into a small opening to the house’s attic. They grabbed the legs and pulled the man attached to them back to the ground. They had caught their man.

The suspect was arrested and taken downtown, where he confessed to his crime and told his story.

Theodore Coneys, AKA "The Denver Spider Man", after his arrest in 1942

Theodore Coneys was born in Illinois in the 1880s, but came to Denver in the 1910s, where he remained. As a child he had poor health, which continued to plague him into adulthood. Because of his health and perhaps also because of the Great Depression, Coneys struggled to keep a job long-term, and frequently found himself without a place to live except for doorways and alleys around Denver.

At some point, Peters and Coneys had become acquainted at the Denver Guitar Club, so one evening Coneys went to the Peters’ house hoping to be able to ask them for some money and maybe something to eat. Unfortunately, this was when Helen was at the hospital and Peters was keeping her company, so no one was home. Coneys decided to break into the house to steal food. A few days later, he tried to do it again but this was when he was found by Peters.

Coneys insisted to police that beating Peters had been a split-second decision. After he had killed Peters, Coneys sought refuge up in the attic, where he stayed until July. Denver Police sent their smallest officer up into the cramped attic where Coneys had made himself a nest of sorts. He had collected his waste and had not bathed during his attic residency, and the stench ended up making the officer vomit. After recovering from losing his lunch, Officer Fred Zarnow said of the attic, “A man would have to be a spider to stand it long up there.” The newspapers heard this, and ran with it. Theodore Coneys was dubbed “The Denver Spider Man,” and a legend was born.

Coneys was charged and convicted of murder by a jury and sentenced to life in prison in October of 1942. He was sent to the state penitentiary in Cañon City, and remained there until his death on May 16, 1967 at the age of 84. He was buried in a nearby cemetary.

Perhaps this tale sounds familiar to you, because the legend lives on. In the 1950s Erle Stanley Gardner mentions this case in his Cool and Lam novel Beware the Curves. CSI: Crime Scene Investigation updated this story for the twenty-first century in season 2 with the episode "Stalker" in 2002. At a live episode at the Boulder Theatre in 2017, co-host of the podcast "My Favorite Murder" Karen Kilgariff shared the story of the Denver Spider Man, which is how yours truly first learned of the story.

Interested in learning more? Check out our clippings file on Theodore Coneys and our digital collections!

Amazing! There are, no doubt, hundreds of other creepy and interesting stories of Denver past. Gimme More!!

Thank you so much, Zenna! More coming soon - I'm glad this story has been such a hit!

This is a terrific story! Keep them coming!

Thanks, Julia! I've been researching a couple of stories, so more coming soon!

I remember my mother telling me this story and it scared me to death. I always was afraid that a man was hiding in our attic or basement. I also recall the horrific Duckworth murders. A teenager went over to his neighbor's to borrow some tools in order to fix his bdicycle. The mother knew the young man well, so she took him to the basement to get the tools. For no reason whatsoever, he killed the the 26-year-old wife and mother with a hammer and screwdriver. When her 5-year-old son went down to the basement to help his mother, he also was killed. The newspaper headlines were almost as frightening as the crime itself, referring to "bloody footprints" found at the scene. The 16-year-old neighbor confessed to the murders under routine questioning. I also remember the Denver Police Scandals of 1961, the kidnapping and murder of Adoph Coors III, the rise and fall of Magic Mountain in Golden, East Tin Cup, President Eisenhower using Lowry Airfare Base whenever he came to Denver (his wife was from here), and many other stories and events in our City's colorful history.

I apologize for the typos, "bicycle" and Lowry "Airforce" Base.

Thanks, Ralph, I'll have to look those stories up. I'm always interested in hearing more about the less-common murder stories around Denver and Colorado, especially those with an unusual aspect to it beyond just someone killed someone.

This is bogus. This is my father, and he brought with him me to the states. thing is girl had a boyfriend who ended up being her husband; the guy got along with my dad then got alone with her and her boy and threatened them enough with a plan and they were going to get rich too. my father got beat to death by the family, they would have killed me too but the kid wanted me for himself so i got to live. the neighbor or somebody walking by saw the beating being done and got help. also my father lived but he forgot he had me and the husband went to my fathers bedroom at the hospital and convinced him he was a friend and had told my father to get home safe and it would be a short flight. even gave my father money the boys savings to do so. to this day i still cant tell you but my father is higher than a sir. and turns out im with the husband and the boy now. thing is i am from another country.