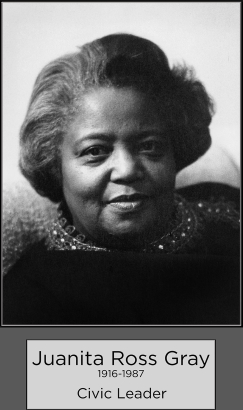 The Denver Public Library is currently accepting nominations for the 2023 Juanita Gray Community Service Awards. These awards honor African American men and women who make outstanding contributions to the Denver metro area and who exemplify the ideals and spirit represented by Juanita Gray’s commitment to the Denver community. We are equally interested in African American youth, ages 14-18, who are setting a positive example for many in our community; the youth awardee will receive a scholarship. Nominations should be completed online or printed and mailed or dropped off using the downloadable form. Nominations are due by Wednesday, November 23 at 6 p.m.

Nominations are reviewed by a committee consisting of library staff and community representatives. We ask that you please be thorough with your nomination to demonstrate the nominee’s achievements and contributions. Previous recipients of the award

Please note, the event will take place on Saturday, February 4, 2023, to acknowledge the award winners. The event will be open to the public. More information will be available later this year. For more information about the awards, questions about the criteria, or assistance with the nomination form, please email jgcsa@denverlibrary.org.

Nominations are due by Wednesday, November 23 at 6 p.m.

Greetings I am writing a Labor History Journal article that includes a mention of Juanita Gray. A now-deceased friend of mine, Howard Wallace, when a Denver resident at the age of 19 in 1955, apparently managed her campaign to be the first African-American elevated to the Denver school board. Howard Wallace as an adult became a national labor leader and a recipient himself of the San Francisco NAACP annual civil rights award (He also was on the Board of the NAACP in 1954 when he was in high school in Denver. Might there be any records or knowledge in Denver about Ms. Gray's 1955 campaign to which you could refer me? I flew to Denver in August to do research in the Blair Caldwell archives and did list to a tape recording she made in the 80s but she didn't mention her campaign.

Hoping to hear from you.

The Juanita Gray Awards/committee works to honor community members and doesn't have access to the institutional/historical record you're looking for. I would suggest sending your request directly to the Blair-Caldwell library staff using this form. They can review archival resources and hopefully locate the information you need. Thanks!...-Juanita Gray Community Service Awards Committee