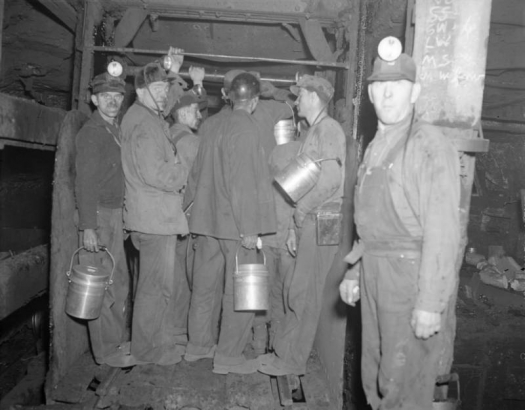 Mining for coal has never been an easy job for the men who go down into the mines, or the families who wait for them above ground.

Besides fighting the dangers of cave-ins and long-term health hazards such as black lung, coal miners have usually had to fight their bosses for a fair day's pay for a fair day's work. That was certainly the case in late 19th and early 20th Century Colorado coal mines.

Colorado, particularly the southern part of the state, produced massive amounts of coal during this era. Unfortunately, Colorado's coal empire was built on the backs of, mostly, immigrant miners who toiled in extremely dangerous conditions while living in isolated company towns in the narrow canyons of Huerfano County. Their struggle for decent working conditions and a living wage ignited a battle that would alter employer/employee relations for decades to come.

On the eve of Labor Day, their struggle is worth remembering.

Most of Colorado's coal mining activity took place in Las Animas and Huerfano Counties on the Eastern side of the Rockies in an area known as the Southern Coal Fields. The high grade coal that miners pulled from this area was particularly prized by the steel industry for use in creating railroad tracks and other instruments of heavy industry.

If you worked in a coal mine during this era, it's very likely that you worked for the Colorado Fuel and Iron Company, which was owned by robber baron J.D. Rockefeller. At one point, CF&I produced 75% of Colorado's coal and employed as many as 10 percent of Colorado's workforce.

From 1884-1912, Colorado miners died at nearly double the rate of the national average, according the University of Denver's Coal Field War Project. Mine owners, including Rockefeller, were rarely held accountable for the atrocious conditions of their mines, and injured miners did not have the luxury of modern workplace protections such as disability insurance and workman's comp.

But unsafe work conditions were hardly the only problem Colorado coal miners faced as they headed to work. Thanks to a variety of unfair work practices, miners were paid by the amount of coal they pulled from the mine, not by the number of hours they worked. Even worse, miners were not compensated for the time they spent actually getting down the mine or the time they spent tunneling, laying track and other jobs that they referred to as, "Dead Time."

In short, conditions were ripe for exactly the type of labor conflicts that would tear Colorado apart in the years between 1900-1913.

By 1900, the United Mine Workers of America was actively organizing Colorado's coal miners, and in 1913, after a few false starts, they launched a massive strike that would all but shut down the Centennial State mining industry.

The 1913 strike involved nearly 90% of Colorado's coal miners and involved an exodus from the mining camps to UMWA-sponsored tent cities that had a devastating effect on the families of the men walking the picket lines.

The strikers' demands were relatively benign by today's standards. Their conditions included:

Not surprisingly, the mine owners were not happy about the strike and were more than willing to use brutal force to suppress their rebellious workforce. Rockefeller's representatives hired private security companies to put down the strike with violent results.

After a short time, Colorado's National Guard was called out to calm things down, but the Guard quickly morphed into an extension of the mine owner's private forces and were responsible for more violence than they prevented.

Tensions between striking miners and the men hired to put them down came to a head on April 20, 1914, when gunfire shattered the calm of a Sunday morning at a strike encampment at Ludlow. Though there are still disputes as to who started the shooting, there's no question about who took the brunt of the violence that followed; innocent women and children.

When the gunfire subsided, 25 people were dead, including 11 children. Most of those children died from suffocation when a burning tent collapsed on a makeshift bunker where they'd taken refuge.

News of the murders in Ludlow spread quickly and ignited violence across the coal field as striking miners unleashed their pent-up rage on the coal mines and their absentee owners. The violence continued for 10 more days until Federal troops stepped in to break the warring parties apart.

The Colorado coal strike lasted for another seven months before desperate miners finally went back to work. Though they'd wrangled a few concessions from their bosses, the strike was anything but a victory for the men and women who put everything on the line in hopes of winning fair pay and safe working conditions.

One man who walked out of the Ludlow Massacre aftermath relatively unscathed was the man responsible for much of the conflict in the first place, J.D. Rockefeller. Rockefeller's millions of dollars and incredible influence was not enough to save him from a barrage of withering press coverage about his role in the massacre. But Rockefeller was as every bit as smart as he was rich and turned the massacre into public relations victory.

Shortly after the massacre, Rockefeller heeded the advice of former business reporter and father of modern public relations, Ivy Lee, and paid a visit to his Colorado mines. During that visit, Rockefeller met with miners about conditions in the mines and was even photographed dancing with miners' wives. Though he didn't necessarily acknowledge it at the time, Rockefeller's trip was one of the first examples of the PR practice we now know as, "damage control."

Colorado's coal industry steadily declined in the years following Ludlow and by the 1960s was almost completely gone from state. (Though labor strife continued throughout, including the infamous Columbine Mine Massacre of 1927.)

Though coal is no longer a big part of our state's economy, many folks still remember the men and women who fought so hard for basic workplace safety and fair pay. Echoes of Ludlow and the Colorado Coal Field War can be found in both the gains made by workers, including the 8-hour work day and the weekend(!), as well as in the way corporations wield public relations as a means of covering up their mistakes and misdeeds.