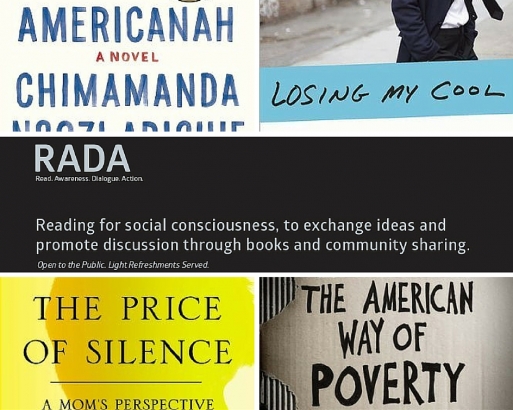 Last year R.A.D.A., a social issue based book discussion group piloted at two branches; The Blair-Caldwell Library and the Rodolfo “Corky” Gonzales Branch Library. The overwhelming response from the community was positive so we're bringing the series back! We've added two additional branches and three new locations that highlight the issues of immigration, social identity, mental health and poverty. The R.A.D.A. book discussion series provides a safe space to discuss some of the issues and movements of the day with respect and compassion. We will be reading to raise our social consciousness; to exchange ideas, understandings, and experiences; and to discuss actions individuals and communities can take to address problems we are facing. Light refreshments served at each location.

From the award-winning author of Half of a Yellow Sun, a dazzling new novel: a story of love and race centered around a young man and woman from Nigeria who face difficult choices and challenges in the countries they come to call home. Fearless, gripping, at once darkly funny and tender, spanning three continents and numerous lives, Americanah is a richly told story set in today’s globalized world: Chimamanda Ngozi Adichie’s most powerful and astonishing novel yet. More books by Chimamanda Ngozi Adichie. Book summary courtesy of Goodreads.

A pitch-perfect account of how hip-hop culture drew in the author and how his father drew him out again-with love, perseverance, and fifteen thousand books. Williams is the first of his generation to measure the seductive power of hip-hop against its restrictive worldview, which ultimately leaves those who live it powerless. Losing My Cool portrays the allure and the danger of hip-hop culture like no book has before. Even more remarkably, Williams evokes the subtle salvation that literature offers and recounts with breathtaking clarity a burgeoning bond between father and son. Book summary courtesy of Goodreads.

Liza Long takes a devastating look at how we address mental illness, especially in children, who are funneled through a system of education, mental health care, and juvenile detention that leads far too often to prison. She is the mother of a child with an undiagnosed mental disorder. When she heard about the shooting at Sandy Hook Elementary School in Newtown, Connecticut, her first thought was, What if my son does that someday? "She asks one central question: if there is a poster child for cancer, why can there be one for mental illness? The answer: the stigma. Liza Long is speaking in a way that we cannot help but hear, and she won t stop until something changes." Book summary courtesy of Goodreads.

Saturday, October 15, 2 p.m.
Rodolfo “Corky” Gonzales Branch Library
The American Way of Poverty: How the Other Half Still Lives, by Sasha Abramsky

The American Way of Poverty shines a light on this travesty. Sasha Abramsky brings the effects of economic inequality out of the shadows and, ultimately, suggests ways for moving toward a fairer and more equitable social contract. Exploring everything from housing policy to wage protections and affordable higher education, Abramsky lays out a panoramic blueprint for a reinvigorated political process that, in turn, will pave the way for a renewed War on Poverty. Book summary courtesy of Goodreads.

Engage programming is adult and family programming located at branch libraries throughout the city of Denver. These programs include crafting; music; history; authors; and more. All of our events can be found on the Denver Public Library events calendar and our programming brochure (which are distributed to all of our branch locations).

For more Engage events, please check out the online Engage calendar or the upcoming programming brochure.