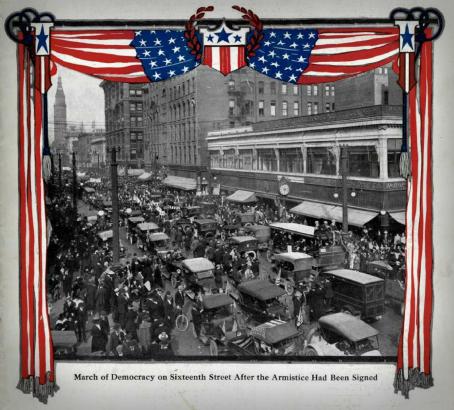 Ninety-five years ago, on November 11, 1918, Denver celebrated the signing of an agreement between Allied forces and Germany that ended World War I.
A very vivid description of the first Armistice Day celebration appears in the November 1918 issue of Municipal Facts, a monthly newsletter once published by the City and County of Denver (1909-1931) that reported on the previous month’s happenings (see the index to this digitized publication here).
The photographs and words used to describe November 11, 1918, certainly depict a joyous Denver—thankful that the war was over and simply happy to be out and about. A killer influenza pandemic had gripped the nation and Denver had placed restrictions on public gatherings to curb the spread of the illness.
The Municipal Facts article “The Day of World's Liberty as Observed in Denver” describes how the party broke out early on November 11, 1918:
The news reached Denver in the dead of night after the city had gone to sleep. Suddenly a great clamor broke forth; whistles blew, bells rang, and the harsh calls of newsboys brought citizens to bolt upright in bed with one word upon all lips—Peace! People poured from hotels and rooming houses downtown; automobiles, piled high with their shouting human freight, came honking from the residence districts into the business section, and a celebration had started that lasted with little intermission for forty-eight hours. Awakened by the tumult in the early morning hours, Mayor Mills proclaimed a public holiday and dav of thanksgiving.
At the time of the Municipal Facts article, there was already talk of designating November 11 as a federal holiday (it eventually became one—Armistice Day—in 1938). Suggestions for naming the day were plentiful: Liberty Day, Wilson Day, Victory Day. As the article notes, “Another proposal is that Thanksgiving Day, instead of being celebrated on the last Thursday in November, should be fixed permanently on November 11.”
The first celebration of Armistice Day was “wonderful in that it was entirely impromptu.” By morning, many stores and businesses had dismissed their employees for the day. Crowds in the streets grew so large that they halted trolley traffic in the business district. Then, there was a spontaneous parade:
Touring cars, motor trucks, crowded with the cheering employees of the city's industrial houses; wagons, motorcycles, bicycles, everything on wheels paraded up and down Fourteenth, Fifteenth, Sixteenth, Seventeenth and Eighteenth streets. Speed rules were broken with impunity as motorists stepped on their accelerators to create a greater din with the strings of empty oil cans and tin buckets tied to the rear axles. Hour by hour the throng of pedestrians swelled, marching in the center of the streets and on either sidewalk, while automobiles whizzed wildly between the milling thousands. Yet with all this commotion and excitement and confusion only nine accidents were recorded on the police surgeon's book.
The crowds were composed of all types of Denverites:
…laborers in their overalls, bakery girls and dairy girls in white caps and aprons, stock-yards employees on horseback in cowboy regalia, shop girls, clerks, soldiers, who will never get to France; businessmen, occasionally one wearing a high silk hat to add to the merriment of the occasion; ragged urchins and little girls in costume, pretty girls wearing saucy paper hats and thrusting powdered pom-poms into everyone's face, fantastic figures in carnival attire, sober-clad Red Cross nurses, all united to give that touch of hilarity so typical of the celebration everywhere. As the crowd surged along it scattered into the air gay little clouds of confetti and colored streamers. It stamped and whistled, it tooted paper horns, it sang and it cheered.
Modes of celebration included casting ridicule on German Kaiser Wilhelm II:
[The crowd] laughed and vented its immeasurable scorn upon rag effigies, crowned with saucepan helmets, of that poor, deluded creature that dreamed he could crush liberty in the world…It was one of the favorite modes of diversion to treat with considerable nonsense these effigies of one, William Hohenzollern. He was burned at Sixteenth and Curtis streets, hung to the trolley poles, dragged at the tail-boards of motor chariots, kicked and buffeted, plastered with signs of derision, treated with a vast contempt.
In Denver, the party continued until after midnight on the morning of November 12, and Municipal Facts declared the day would “…go down in history as the first international day of rejoicing.”