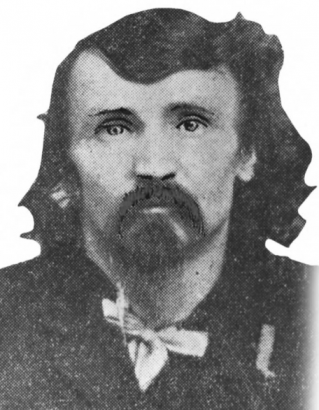 Alferd Packer, the Colorado Cannibal, is one of the most notorious figures in Colorado history. But Packer's gruesome crimes of 1874 are only a small part of his life story. After escaping justice in Saguache County, living on the lam for nearly a decade, and enduring two trials by jury, Packer was sentenced to 40 years at the Colorado State Prison in Cañon City.

During his years at Old Max, Packer kept himself busy making crafts out of braided horse hair and working to secure his freedom. Thanks to a steady source of income, Packer was preyed upon by several con men who promised to work for his liberation, but were really just picking his pockets.

What made Packer so attractive to swindlers was a $25 a month pension he received for his "service" to the United States (aka, The Union) during the Civil War. Packer received the pension as a result of an 1890 act of Congress that gave assistance to veterans who served the U.S. Army for at least 90 days and were rendered unable to perform manual labor as a result of their service. To this end, Packer claimed that he developed epilepsy after fighting off a case of typhoid fever while serving. This, however, was not true.

Packer did both serve in the Army and had epilepsy, but his condition predated his service and was the basis for a medical discharge he received after only six months of service. Nonetheless, Packer somehow wrangled his way into a $25-a-month pension from the government. That money, about $720 in 2020 dollars, was a considerable sum for an incarcerated felon and elevated Packer's status in the prison hierarchy. But it also attracted sharks like James P. Daily.

Daily was a small-time con man who served a two-year sentence at Cañon City for writing bad checks. During his time behind bars, Daily became aware of the fact that Packer had squirreled away more than $125 from his Army pension. Shortly before his release in 1895, Daily convinced Packer to give him $75 which Daily claimed he was going to use to gather signatures for a petition calling for Packer’s release. Daily promised that the petition would land in the hands of influential people.

Unless you count the employees of Denver's bars and brothels as influential people, Daily was simply lying. After spending the first $75 on wine, women, and song, Daily convinced Packer to send him the rest of his savings, which was then blown on prostitutes and gambling. Packer eventually figured out the con, and reported Daily to the prison warden. Shortly thereafter, Daily returned to Cañon City in chains, though it's unclear if he and Packer ever crossed paths again.

Five years later, Charles M. Fegen-Bush, a con man who worked at a slightly higher level than Daily, wrote Packer offering legal assistance after a failed bid at winning a pardon from Colorado Governor Charles S. Thomas. Fegen-Bush offered the services of a 17th Street lawyer named William "Plug Hat" Anderson. Anderson, he said, would make the legal argument that Packer's crimes were committed on an Indian reservation and that they never should have been prosecuted in the first place.

What Fegen-Bush didn't mention was that he had recently been arrested for running a real-estate con and that he was really interested in having a freed Packer serve as a magnet for customers at a cigar shop he was planning to open.

Plug Hat immediately jumped into the fray and contacted Denver Post reporter Polly Pry, who had been working to secure a Packer pardon via her column in the Denver Post. Pry connected Anderson with Post owners Harry Tammen and Fred Bonfils, who agreed to pay for Packer's legal defense. Anderson took the whole thing very seriously and immediately hopped a train to Cañon City to meet with Packer.

When he arrived in Cañon City, he immediately hit up Packer for $25 and asked him to sign over power of attorney, too. This raised plenty of red flags with the Cañon City Warden, who immediately contacted Bonfils and Tammen asking why they sent down a con man to meet with Packer.

The newspaper moguls were less-than-pleased by Anderson's antics because he had also blown off a meeting with them to go to Cañon City. When Anderson finally met with Bonfils and Tammen, things went badly from the start and within minutes of walking into their offices, he had shot and wounded both men. While this was bad news for Tammen and Bonfils, it turned out to be just the break Packer needed.

Packer was brought to Denver to testify at Anderson's trial. During his visit he was given a tour of the city and, contrary to the image of growling cannibal, Packer won over the hearts of many a Denverite. Shortly after his visit, the people of Denver launched a massive petition campaign to secure his release. Governor Thompson relented and shortly after, commuted Packer's sentence. (And after three trials, Anderson was never convicted of the Tammen and Bonfils attack.)

After his release, Packer worked odd jobs, but could never really work for long at any one place due to his epilepsy. Though he continued receiving his Army pension for the rest of his life, he was never bothered by swindlers again.

This is the first time I knew Alferd Packer had been brought to Colorado and ended up in Cañon City. Nor did I know he was called the "Colorado Cannibal." That's more notoriety for Colorado than I can handle in one day!!! Thanks for doing this research and writing, Brian Trembath.

Yet another great story involving Tammen and Bonfils!!!

Great background to one of the many strange stories involving Tam & Bon.

My grandmother, who died in 1982 at age 98 and who spent her whole life in Denver, had a friend named Frank McLister who owned, or was part of, the Kohler McLister Paint Co. Frank's father, also named Frank, had been warden of the Penitentiary in Canon City during 1892-94 when Alferd Packer was incarcerated there. Frank Jr. used to like to tell the story of how Packer, apparently a pretty gentle soul when he was not hungry, had been his baby sitter from time to time. I have no idea how apocryphal this story is but it made for good conversation.

Thanks for sharing this wonderful story with us, Bill! Packer definitely had a dark side, but we've run across plenty of stories that show a different side, too.