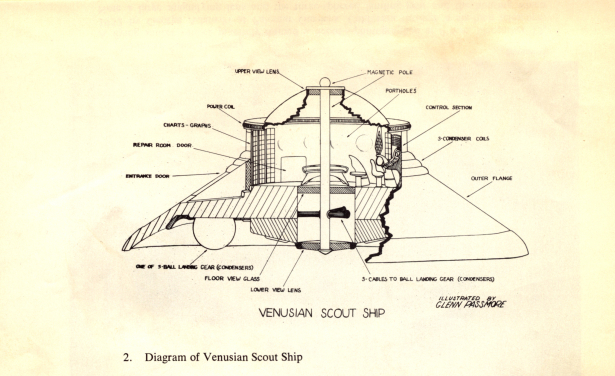 Continuing from the previous entry, George Adamski has boarded the Venusian mother ship, in the company of his eclectic companions from Mars (Firkon), Saturn (Ramu) and Venus (Orthon). Aboard the long, cylindrical craft, Adamski met the de facto leader of the interplanetary spaceship club, a man referred to only as “The Master” (presumably not the same one from Doctor Who lore). 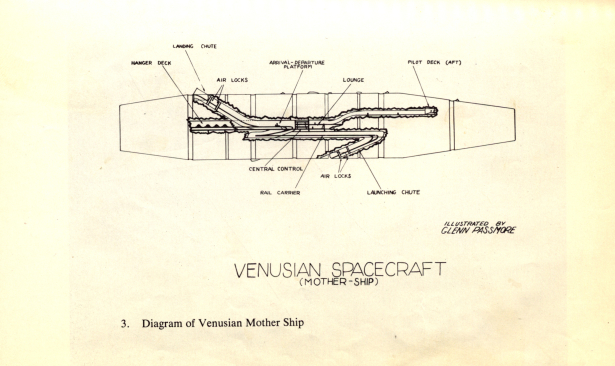 Cruises the ‘substance of the universe’ like a submarine navigates the ocean. Even relies on a periscope for viewing!

Adamski learned that The Master was nearly 1,000 years old in his “current body,” a statement which was never further explained, but implies some sort of reincarnation or regeneration was at play (perhaps The Doctor’s Master, after all?). The Master went on to regale Adamski with tales of life and travels in the solar system, which were all superficial, and devoid of much useful information. He also waxed philosophically about things we know to be utterly, laughably false. For example:

“In the vastness of space there are innumerable bodies which you on Earth call planets. These vary in size, as do all forms, but they are very much like your own worlds and ours, and most of them are peopled and governed by forms like yourself and like us. While some are just reaching a point where they are capable of supporting such forms as ours, others have not yet reached that stage of development in their growth. For you must understand that worlds are but forms, and they too go through the long period of growth which all forms experience, from the smallest to the largest."

Questionable grammar aside, the notion that “most of” the planets in the universe not only have life (sentient life at that), but are also “ruled and governed” by humans (“forms like yourself”) is the very definition of absurd. It also gives us a bit of a telltale glimpse at Adamski’s hubris (as if this entire tale didn’t already make that obvious). While there’s an argument to be made that life probably exists outside our tiny planet (though that conclusion is still hotly debated among scholars), it clearly isn’t as widespread as this claim paints it to be, and such life would certainly bear little or no resemblance to humans, except perhaps at a very superficial level. 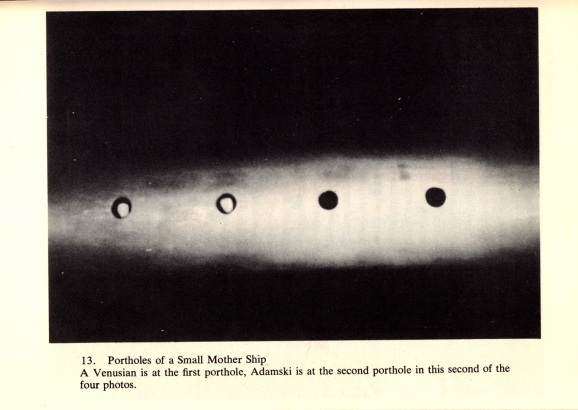 If those are faces peering out of portholes, I’ll eat my hat. And I just had lunch, so I’m not hungry.

Even then, this is hardly the most bizarre and implausible claim ostensibly made by The Master. When expounding on the nature of Life, The Universe, and Everything (with apologies to Douglas Adams), he said this:

"Another aspect of which as yet you have no conception is that the body of any human being can be as comfortable on one planet as on another. While there are some differences in atmospheric conditions, depending upon the size and age of the planet, these are little greater than those which you experience on your Earth between sea level and on a mountain several thousand feet high. Certain people are affected by such changes more than others, but all can become acclimated in time.”

Since the comparative (and deadly) atmospheres of Venus and Saturn were addressed in parts (1) and (2) of this series, let’s take a look at Mars, arguably the most human-compatible atmosphere of any of the planets from which Adamski’s trio of alien friends allegedly hailed. While not boasting the crushing gravitational force of Saturn’s frozen hydrogen, or the caustic sulfuric acid clouds of Venus, Mars nevertheless has an air quality index that isn’t about to put it high on anybody’s “most temperate climate” list. Most notably, Mars’ atmosphere is only about 1% the volume of that of Earth, and what’s there is comprised almost entirely of carbon dioxide. 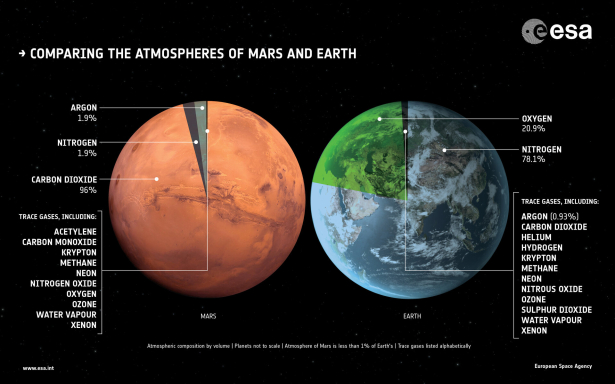 The notion that trying to breathe in these conditions would be analogous to the difference between sea level and a mountaintop is literally ridiculous (in that it’s deserving of ridicule). Even at the top of Mt. Everest, where the air is so thin that humans can suffocate, the pressure measures roughly a third of that at sea level. To put that in perspective, the average air pressure on Everest would be equivalent to that on Mars only if Everest were about 20 miles taller. 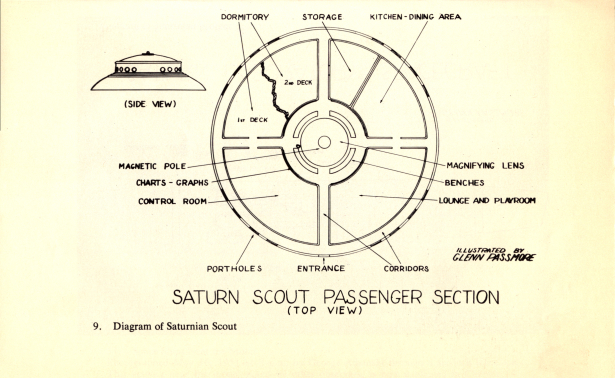 Note the Saturnian Scout is squatter than the Venusian, and lacks the light bulbs... er... "landing gear."

Rather than dwelling on subjects of a scientific nature, which is just as well, given how far off the mark he routinely was, The Master focused mostly on discussing less tangible (or testable) topics. The overriding message The Master brought to Adamski (rather, to all humanity by way of Adamski) was one of hope and love.

"On your Earth we have heard many times the phrase ‘the road to happiness.’ It is a good phrase, for progress is happiness and lies all along the upward pathway from its beginning. And happiness makes men brothers in tolerance toward another man’s efforts, even though of a different nature from their own.

"There is nothing wrong with your Earth, nor with its people, except that in their lack of understanding they are young children in the universal life of the One Supreme Being. You have been told that in our worlds we live the Creator’s laws, while as yet on Earth you only talk of them. If you would live by the precepts of even what you know, the peoples of Earth would not go out to slaughter one another. They would work within themselves, and their own groups, their own nations, to achieve good and happiness in that section of your world wherein they were born and therefore call ‘home.’

While I don’t fault the underlying principles, some of the phrasing and concepts gave me pause. You may recall my previous mention that Adamski was a practitioner (and teacher) of the neo-theosophical movement. This is relevant, here, because the purported ‘wisdom’ conferred upon Adamski from The Master (here, and across all the claimed interactions) is the kind of thing professed in all the theosophical ideologies, almost verbatim. In fact, in theosophical teachings, the leaders are referred to as The Masters, and it is from mythological figures lauded in theosophy that Adamski pulled the names he conferred on his companions. While this isn’t in itself evidence that Adamski conjured his claims of alien visitors from whole cloth, it does bring to mind this quote from Susan B. Anthony:

“I distrust those people who know so well what God wants them to do, because I notice it always coincides with their own desires.” 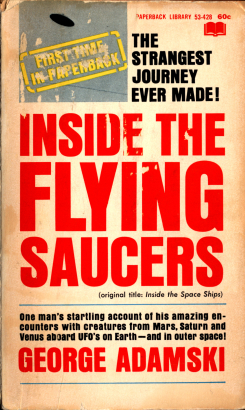 Originally published as “Inside the Space Ships,” but “Flying Saucers” has a much nicer ring to it.

In fact, Adamski spent surprisingly little time discussing actual space travel, but rather focused on the ‘teachings’ of the enlightened beings. He made mention of visiting several planets, including Venus, where he was informed that his (then deceased) wife had been reincarnated, and was living peacefully. He also professed to have visited several other planets in the system, though only from orbit. 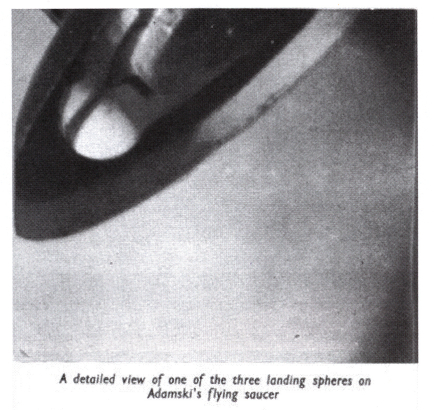 Adamski was taken on multiple voyages (according to his accounts), and introduced to a number of other “Masters” as well. Unfortunately, just as there was little explanation as to how the technology operated, there was precious little depth to the utopian ideals presented, either. Their teachings always amounted to vague proselytization to be kind, and to treat our fellow men with love and tolerance. Again, while noble ideologically, they offered no actual guidance or instruction – merely assertions that the goal could easily be accomplished, if only people would give it a shot.

“I think the peoples of Earth would be amazed to find how swiftly a change could come throughout the planet. Now that you have the medium for world-wide broadcasting [referring to radio], messages urging love and tolerance for all, instead of suspicion and censure, would find receptive hearts. For the great part of the Earth’s population is weary of strife and its aftermath of woe. We know that, as never before, they hunger for knowledge of a way of life that will deliver them. We know that there is fear and confusion in their minds because they have seen and felt the results of two great wars that have served only to foster the seeds of another.”

Messages of love, peace, and brotherhood were hardly new notions at the time, but the professed source of these particular messages garnered Adamski a bit of attention, notoriety, and even prestige at times. In 1959, by way of an intermediary, Adamski was invited to meet with Juliana, Queen of the Netherlands. While Adamski proudly boasted of this audience, some of her subjects were not as keen. According to the Time Magazine article "The Queen and the Saucers" (June 1, 1959), the Chief of Staff for the Netherlands Royal Air Force reportedly referred to Adamski as “a pathological case,” while a prominent newspaper lamented “…she had invited to the palace a crackpot from California who numbered among his friends men from Mars, Venus and other solar-system suburbs.” 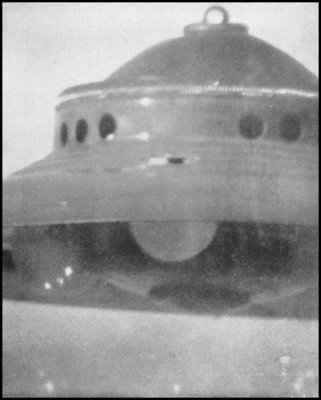 Those are vent holes, not ‘portholes,’ and the ‘light’ on top is a ring for a hook. You can even see where the gray enamel paint is chipped.

Adamski, while coming across as very mild mannered, definitely had a bit of an ego, and was quite reluctant to admit when he, himself, had been duped. During speaking engagements in 1957, he began displaying a letter he had received, supposedly from the Cultural Exchange Committee of the U.S. State Department. The letter, signed R. E. Straith, stated that the government was fully aware of his meetings with extraterrestrials, and that members of the government would soon come forward to confirm his claims. 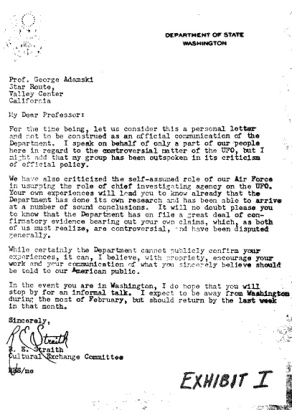 The government did, in fact, come forward… to denounce the letter as a hoax. According to James Mosley, a fellow ufologist, the FBI informed Adamski that the letter was fraudulent, and repeatedly requested that he stop displaying it as corroboration. Mosley had insider knowledge on the subject because, as he admitted in 1985, he was the one who had forged the letter as a prank. 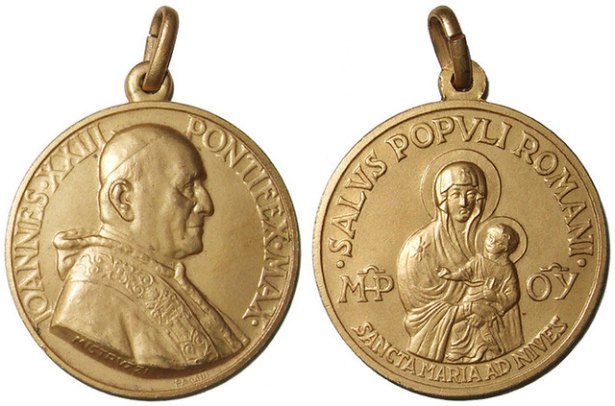 This didn’t stop Adamski from displaying the letter, but by then his popularity and renown were fading. Many others had come forth with fanciful tales of aliens and flying saucers, and Adamski was finding it harder to remain relevant. In 1963, he claimed to have had a clandestine audience with Pope John XXIII (allegedly because the pontiff refused to speak to the extraterrestrials directly), but the medallion he showed off as a “souvenir” of their meeting turned out to be a readily available trinket sold to tourists (similar to that shown above). 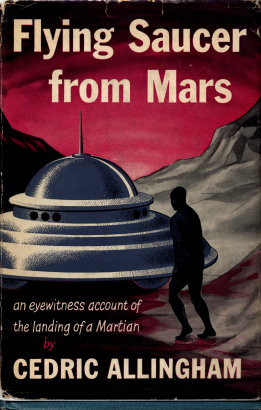 In 1955, Flying Saucer from Mars presented a story remarkably similar to those told by Adamski. Shortly after publication, it was revealed that the author, Cedric Allingham, didn’t exist, and the book was actually written by British astronomer Patrick Moore and his friend Peter Davies. Their point, they said, was to illustrate just how easy it was to dupe people into believing fanciful tales. While many (if not all) of Adamski’s claims have been resoundingly and thoroughly debunked at this point, it’s impossible to dismiss the impact he had on discussions of life on other worlds. His claims, and the ‘teachings’ he received are regarded as the early infancy of what became known as the New Age movement.

With that, I will draw my protracted tale of George Adamski and the Venusians to a close. Please visit our website, and like our Facebook  page.

For an unbiased, factual look at George Adamski's life, mission and philosophy, and the many attendant half truths and whole lies, see www.the-adamski-case.nl.