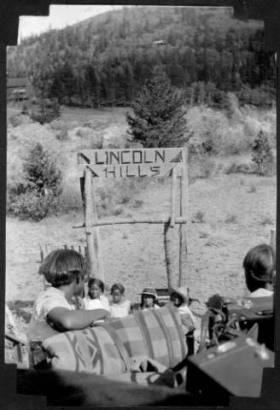 Denver’s proximity to the Rocky Mountains has meant easy escape to scenic mountain vistas for peace and renewal.  Although Jim Crow laws were no longer openly practiced in Colorado in the 1920s, African Americans in Colorado however still struggled with racial segregation.  Moreover, the threat of violence and by the Ku Klux Klan (The Klan) was a real deterrent to African Americans being able to fully enjoy outdoor activities in the mountains.  During the 1920s Colorado had the second largest chapter of the Klan in the country; 50,000 members in its heyday.

Despite issues of racial segregation and deep-seated violence of the Klan, two African American men saw an opportunity to turn a mining claim into a vacation community.  In 1922, Edwin Regnier and Robert Ewalt bridged the gap by creating a land development company, which sold mountain property to African Americans.  The duo believed that African Americans should enjoy mountain lodging and amenities the same as whites at other Colorado resorts. Regnier and Ewalt sold plots of land to African Americans from all around Colorado, especially Denver.  A potential purchaser was allowed to make a $5.00 down payment and thereafter $5.00 a month until the full price of $50-$100 was accrued for the plot.  Such prices for a small parcel of land in the mountains would be unthinkable in today’s reality market.  Property owners built vacation homes and cabins and some even erected teepees on their lots.  Sometimes the owners rented or sold their plot.

Lincoln Hills, situated 38 miles west of Denver, became a mountain resort community in Gilpin County, Colorado.  It was the largest resort west of the Mississippi built by and for African Americans.  It was referred to as the “Greatest summer recreation park in America.”  From its inception it enjoyed immense popularity.  African Americans from all parts of the United States, including well-known celebrities, frequented the famed resort.  A train ride from Union Station made for easy access to Lincoln Hills.  Memoirs from resort vacationers recount the joy of young African American girls at Camp Nizhoni, a YWCA mountain camp at Lincoln Hills, swimming in an unpolluted creek, going on nighttime hikes with flashlights and cooking breakfast over an outdoor fire.

The mountain resort enjoyed a great run, but two factors contributed to its decline and eventual demise. The Great Depression forced many of the property owners to sell or abandon their vacation home or cabin altogether. Additionally, the Civil Rights Act of 1964 prohibited racial discrimination and affluent African Americans soon began to join integrated clubs.  Lincoln Hills closed in 1966.

The entire Lincoln Hills resort was added to the National Register of Historic Places in 1980. Other historic vacation resorts that lured African Americans, were Idlewild in Michigan and Oak Bluffs on Martha’s Vineyard, a resort frequented even today by luminaries such as the Obamas.

Correspondence from the 1920s describing Lincoln Hills, photographs that date from the beginning of the resort and photographs taken in the autumn of 2000.

Frances Mozetta (Hale) Currin describes her experiences as a child aged 9-11 at Camp Nizhoni, a "YMCA mountain camp for African American girls during the 1930s." The camp was located in the Lincoln Hills of Gilpin County, Colorado. Photographs used to illustrate the book, which include captions and identification numbers, are from the collections of Denver Public Library's Western History & Genealogy Department.

Colorado Experience. 101, Lincoln Hills : A Shelter From The Storm

Lincoln Hills' status as the only African-American resort west of the Mississippi river attracted many prominent black figures of the time, including Duke Ellington, Lena Horne, Langston Hughes, and more. Colorado Experience takes you through the rich history of this remarkable landmark through first-hand accounts from those who were there. DVD summary provided by ProQuest Syndetics.

Photo Gallery:
'Round and About Camp 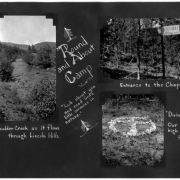 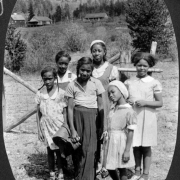 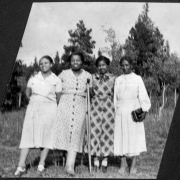 Josh- Thanks for the article and the slide show. What was the name of the guidebook of places accessible to African American travelers? i believe there was a Jewish equivalent guidebook too