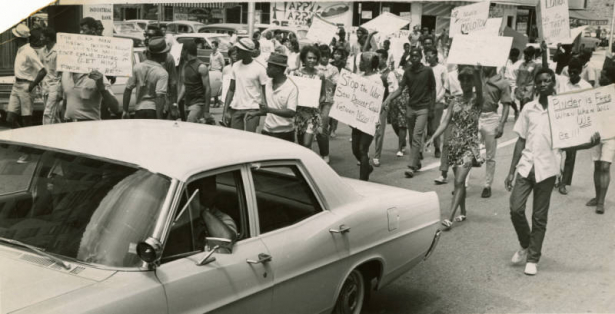 That is what the caption reads on the back of a photograph taken by Rocky Mountain News Photographer Bill Peery on July 22, 1967.

Peery's photo, once part of the photo morgue of the defunct Rocky Mountain News and now preserved in the Western History and Genealogy department, has a caption that begets more questions than answers.

Who was marching? And why?

A deep dive into newspapers on microfilm and the Rocky Mountain News' old clipping library yielded the full story. 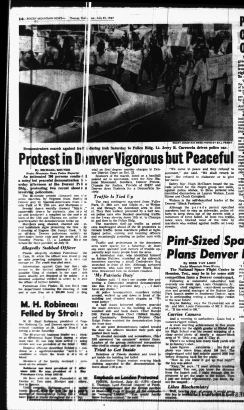 Peery's photo was published in the Rocky Mountain News on July 23, 1967, alongside an article by Michael Rounds entitled, "Protest in Denver Vigorous but Peaceful." The article's opening sentence states,

The "two recent shootings involving policemen" were described further in the article as:

. . . the fatal July 3 shooting of Eugene (Ski Jump) Cook, 25, by an off-duty police officer outside an after-hours bottle club and the death of Louis Timothy Pinedo, 17, a Lookout Mountain School for Boys parolee, on July 12.

The "estimated 200 persons" were identified as Black residents from Northeast Denver and Hispanic residents from Lincoln Park, along with "several dozen weirdly dressed 'hippies.'" Two separate marches culminated in a 40-minute protest on the northeast lawn of the 13th and Champa Street Denver Police headquarters. 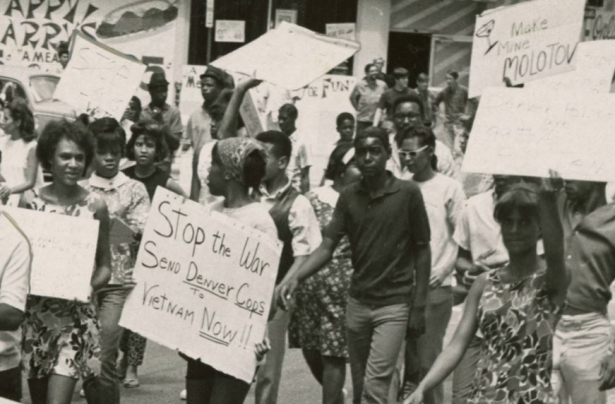 One of the marches began in Fuller Park, continued to Welton Street, and then over to 15th Street. It was then that the march was "preceded by a half dozen police cars who blocked oncoming traffic on the 1-way streets" on the route to the police building.

The marchers tied up traffic as patrol cars leapfrogged ahead of the 60 protesters to reroute traffic. Some marchers yelled at tight-lipped police, cursing and taunting officers and occasionally pounding on police cars with fists. . . . Traffic and pedestrians in the downtown area were sparse for a Saturday. At least one store operator said rumors of trouble apparently kept many people from the area.

A handbill distributed during the demonstration indicated that the New Hispano Movement, Sundiata, Denver Provos, Crusade for Justice, Friends of Student Nonviolent Coordinating Committee (SNCC), and Denver Area Students for a Democratic Society had sponsored the event. A parade permit had been issued the week prior to Louis Rhone, Chuck Campbell, and Lauren Watson (noted in the article as "the self-described leader of the Denver Black Panthers"). While the permit specified that marchers were to stay on the sidewalks, the demonstrators walked on the streets and "sang, chanted and carried handmade signs."

Rounds' article also notes there was at least one counter-protester:

A beret-clad man, who identified himself as Adrian Fulcher, marched on the sidewalk downtown carrying a small Confederate flag . . . . Fulcher said, 'I don't see anyone else protesting a Communist inspired demonstration like this. It's my patriotic duty . . .I don't have any choice." 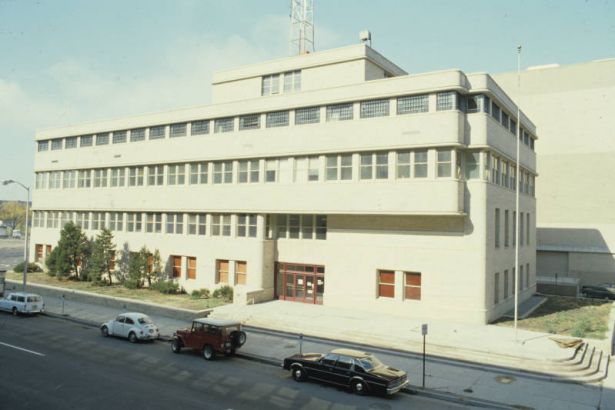 When marchers arrived at police headquarters,

. . . they walked up and down in front of the building and chanted such slogans as 'We want justice.'

Relatives of shooting victim Louis Timothy Pinedo attempted to enter the building through the main entrance, but were denied. Demands and accusations were shouted at Denver Police Chief Harold Dill, who answered with, "No comment."

A Black woman who refused to give her name was reported to have said to the crowd,

We came in peace and they refused to comment. We shall return in war. 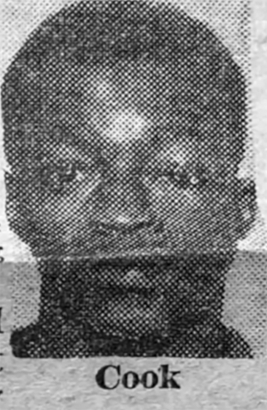 Six shots were fired by Pinder and five bullets struck Cook. Cook was pronounced dead at the scene when an ambulance arrived.

What exactly led to the shooting of Eugene Cook by Pinder varied wildly among the defendant and several witnesses.

Pinder testified on January 16, 1968, that while taking his ill wife, Josephine, out to their car in the club's parking lot, he heard someone say, "Get him," and was then struck on the back of the head and knocked to the ground.

Pinder claimed he saw three parties about five feet away and identified one as Eugene Cook, whom Pinder recognized as someone with a criminal record who had recently appeared in a police bulletin. Pinder said that he drew his pistol as he got to his feet, identified himself as a police officer, and then fired "once, possibly twice" into the ground." But regarding what happened, next Pinder explained,

Harvey C. Carter, a security guard at the Protocrats Club, testified that three men had attacked Pinder and struck him with an object on the head before Pinder fatally shot Cook. Denver General Hospital physician Dr. Dennis Kay later testified that the bruise on Pinder's forehead was consistent with a head striking a blunt object.

Several prosecution witnesses testified that the shooting occurred after Cook danced with Pinder's wife and made insulting remarks.

Witness Ronald Reed observed Pinder and Cook arguing outside of the club. Reed recounted that Cook said to Pinder,

I got nothing to do with you and your old lady. If you mess with me something bad will happen to you.

Reed recalled that Pinder then walked towards Cook, who exclaimed, "Are you crazy?" Reed saw Pinder shoot once, and then Cook fell against a parked car. Reed noted that Pinder "kept shooting down where Ski Jump had fallen." (Rocky Mountain News, July 7, 1967).

Reed recalled that when police officers arrived and ordered Pinder to come with them, Pinder drew his automatic pistol, which was then pulled out of his hands by police.

It took the jury just 45 minutes to acquit John L. Pinder of all charges surrounding the fatal shooting of Eugene Bernard Cook, despite a lack of closing arguments from both the prosecution and defense.

Fogel had waived his first closing argument in the trial to give himself more time for a rebuttal to the defense's closing argument. However, the defense attorneys unexpectedly waived their argument, resulting in nothing for Fogel to rebut.

Pinder, who had been fired from the Denver Police after the fatal shooting, regained his position, but was given a six-month suspension because of what District Judge Robert W. Steele called "poor judgment" in patronizing an after-hours club.

Pinder returned to duty with the Denver Police Department on July 7, 1968. 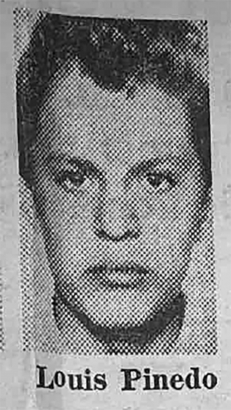 On July 12, 1967, Cain and Patrolman Allen L. Vander Velde responded to a report that "suspicious persons were prowling cars" in an auto storage lot at 1450 Mariposa Street. Seeing activity inside the storage area, Cain climbed the fence to investigate while his partner stood guard.

When Vander Velde alerted Cain that he had spotted a youth crouched between or underneath a car, Vander Velde saw Cain bend down and then cry out. It was then that Louis Pinedo allegedly stabbed Cain in the left forearm. Cain then shot Pinedo. An autopsy report revealed that the bullet struck Pendo in the back.

Hours after Louis Pinedo was pronounced dead, police picked up his Louis's brother, Cruz Pinedo, whom they suspected had been in the car lot when Louis was shot. He was jailed for investigation of larceny from a motor vehicle. 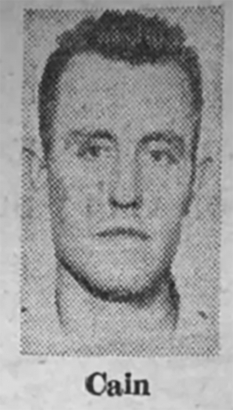 As Cain was leaving the courtroom, Louis Pinedo's older brother Henry spit in his face. Bailiff Ed Walsh recalled that Cain "drew back his arm as though to hit Pinedo," but inadvertently struck Walsh.

Pinedo was swiftly arrested on a contempt of court charge. He was heard gasping, "He's my brother!"

Patrolman Vander Velde replied, "He was your brother."

Pinedo then yelled, "You're proud of what you done, aren't you?"

Henry Pinedo was released from jail the following day as Judge McAuliffe could not find Pinedo in contempt of court since the court had been recessed and the incident had occurred in a hallway.

Katie,
Thanks for the great article. Things haven't changed much.