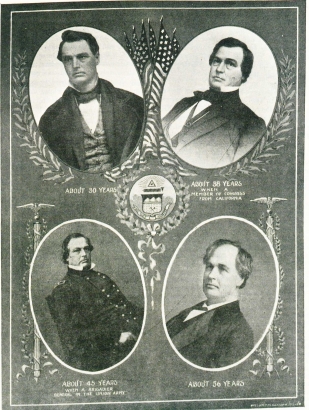 Though General James W. Denver led a very active life that was marked by the kind of professional and personal success that most people would be happy to experience, he's also a figure who has been all but lost to history. Perhaps he lived in an age that was simply too crowded with accomplished men to make his own, quite formidable, accomplishments stand out.

Adding to the issue is the fact that there simply hasn't been much scholarship on his life (Edward Magruder Cook's work Justified by Honor: Highlights in the Life of General James William Denver being a notable exception).

There is, however, one episode from Denver's life that is mentioned in virtually every book and article about the General. That incident is a duel he fought with a man named Edward Gilbert in California in the summer of 1852.

Denver made his way to California via a wagon train he personally led in 1851.

By 1852, he was not only serving in the California Senate, but he was also earmarked by the Governor of California to lead a relief expedition to rescue travelers who were stuck in the Sierra Nevada Mountains. While the effort was praised in some quarters, it wasn't universally popular. In particular, an influential newspaper publisher named Edward Gilbert derided the rescue as a cheap political stunt.

This did not sit well with Denver, who derided Gilbert's comments as the work of someone with an, "envious and malicious heart."

Gilbert backed up his comments by suggesting that, "If any gentleman attached to the train, or any other friend of the governor desires to make issue upon the matter, they know where to find us."

The dispute spiraled rapidly out of control until Gilbert formally challenged Denver to a duel with rifles at 40 paces (roughly 100 feet).

Duels of this sort were relatively common in the mid-19th century and were governed by some very strict rules. In fact, Gilbert and Denver both used a century-old dueling code, the Irish code duello, in an intense effort to forestall the duel by means of an apology, but couldn't determine which man would be responsible for the apology.

So it was that Gilbert and Denver met in Oak Grove, California, approximately 100 miles east of San Francisco on the morning of August 2, 1852.

After the two men paced off, Gilbert fired a quick round, missing Denver entirely. Denver responded by graciously firing his rifle into the air. This was a relatively common practice that allowed both men to walk off the field with their honor, and bodies, in tact. But Denver's gesture was not appreciated by Gilbert, who often railed against such "bloodless duels" in his newspaper - and Gilbert demanded a re-do.

This lit a spark in Denver that Gilbert would not live to regret igniting.

Witnesses of the event said that Denver's whole attitude changed as soon as Gilbert refused to leave the field. Denver cast off his coat, took up his position and commented that he wasn't going to be, "standing here all day to be shot at."

When the signal was made, Denver instantly and fatally shot Gilbert - who expired within minutes right there in the grove.

'A Fairer Duel Was Never Fought'

Denver most certainly didn't want to kill Gilbert but he felt that if he didn't dispatch the man, he would be dispatched himself. And he was right.

In a letter written a quarter century after the duel, Denver reflected on Gilbert's efforts to take, "...every precaution he could to kill, and to give his adversary as little chance as possible." Among those precautions were the fact that Gilbert had a green suit specially tailored for the day so that he could better blend into the foliage, making him harder to spot. Gilbert also delayed the challenge until the last possible moment, denying Denver a proper opportunity to prepare. (Though none of these shenanigans helped Gilbert one bit.)

But what really troubled Denver about the duel was why Gilbert wanted so badly to fight him in the first place. After all, the men were not well-acquainted and, so far as the historical record indicates, they only came into one another's orbits when the spat over the relief expedition accelerated. Writing later, he reflected:

Mr. Gilbert had been the aggressor throughout. He invented a newspaper controversy and, as soon as he got me involved in it, he challenged me. I was a stranger to him personally...and we had never before had any misunderstanding or controversy of any kind on any subject.

What the motives were, I know not. Perhaps it was, as you say, from a morbid feeling that he had compromised himself in another affair, and a determination to obliterate the supposed disgrace in the blood of the first men could pick a quarrel with. This I have heard before...

The Gilbert duel cast a long shadow over Denver's legacy and is mentioned in nearly every biographical book or article on his life. What gets lost in the discussion, however, are Denver's genuine political and social successes. Even if he hadn't killed Gilbert, or had someone name a city after him, Denver was still a very accomplished man who served in Congress, was very active in state politics wherever he lived and advocated for American Indian Rights.

On that subject, he urged better education for American Indians, the reduction of government annuities (in an effort to thwart whiskey sales and other non-subsistance items) and helped secure multi-million payment to the Choctaw tribe in a case in which they had "sold" their land to the government, but never received payment. Shortly before his death, he became involved in a similar case involving the Shawnee.

Of course Denver's ideas of what constituted fair treatment of Native Americans were very different from contemporary views on the same subject. Some scholars have also questioned how pure his motives were in this matter, given the amount of land speculating he did, including speculation on American Indian lands.

In his 1979 book, THE COMMISSIONERS of Indian Affairs, 1824-1977, author Donald Chaput acknowledges Denver's positives but observes that he was still, very much, a man of his time saying,

He undoubtedly tried in most instances to be fair to the Indians, but as a man of the frontier he clearly favored the whites.

Denver's legacy lies, mainly, in something he had no control over: the naming of a future state capitol. But he was very much a self-made man who tried to live as best a life as he could.