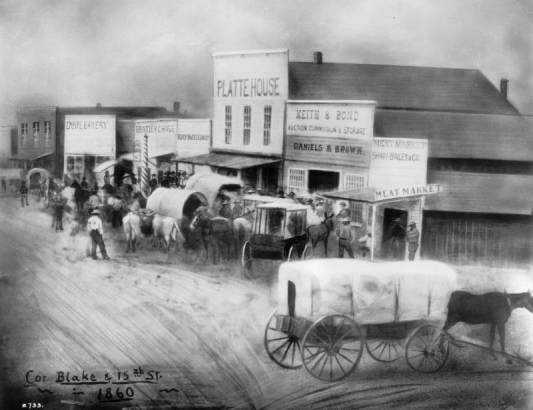 On April 7, 1859, the budding settlements around Cherry Creek—the ones that would later become the Denver Metro area—recorded a rather inauspicious first: a reported homicide. The victim was a German immigrant and cattle rancher named Thomas Biencroff. His killer, who was also his brother-in-law, was a Hungarian immigrant named John Stoefel.

The story of Beincroff's murder and Stoefel's quick path to justice is described in some detail in Jerome Smiley's seminal work, History of Denver.

According to Smiley, Thomas Biencroff's brother and father (to whom Smiley only refers as "an old German") were rounding up cattle at an encampment near Clear Creek. Evening approached, but Thomas never returned to camp. Stoefel, who appears to have been a very impulsive criminal, headed to the Denver area the next morning and made a show of cashing in a bag of gold dust at "Uncle" Dick Wooten's trading post (which was actually in Auraria).

While Stoefel lived it up in Denver saloons, the Beincroff family found Thomas's body with a bullet hole in the head. They very quickly figured out what had happened and caught Stoefel in Denver. He immediately confessed.

At the time, the Denver area was part of Kansas Territory, but felt like a world away from the trappings of formal society. So, the citizens of Denver put together a "people's court" to give Stoefel a chance to defend himself. Stoefel's "pioneer lawyer" (as Smiley describes him) didn't have much to work with since his defendant had already confessed. The 12-man jury (and they were all men) returned a guilty verdict, and in a very short time, Stoefel was sentenced to death.

The next day at 2 p.m., "a frontiersman nick-named 'Noisy Tom'" acted as the executioner at a hastily built execution site on the corner of present-day 10th and Wazee.

Beincroff's murder and Stoefel's subsequent execution were noted two weeks later in the first issue of the Rocky Mountain News. The homicide is acknowledged by the Denver Police Museum as Denver's first major crime and the impetus for organized law enforcement in the Cherry Creek settlements.

(It's worth noting that Beincroff's murder is the first recorded murder in Denver history, but likely not the first murder. It's almost certain that other people, natives and Europeans, were killed in the area; yet their deaths were not recorded, or not deemed worthy of recording.)

Thank you for telling the story of Denver's first murder. You will be interested to know that General William Larimer, founder of Denver, recorded this murder, the execution of Stoefel, and the burial of both the victim and murderer in the new Mount Prospect Cemetery (today's Cheesman Park), in Larimer's pocket diary or memoranda book, which resides in the General Larimer Papers in the Stephen H. Hart Research Center at History Colorado, two blocks from DPL. To avoid any implication that Stoefel's execution was a product of impetuous frontier justice, General Larimer recorded that Stoefel was hanged after a fair trial! The Larimer Papers came to History Colorado through the efforts of the late Stan Oliner, who was the curator of books and manuscripts at History Colorado for many years.

Hi Joe - Thanks for that additional information on the Stoefel case and the holdings at History Colorado. It seemed like an a pretty open-and-shut case, but it sure would have been interesting to learn more about the motive. Thanks for reading and commenting and please stay well!