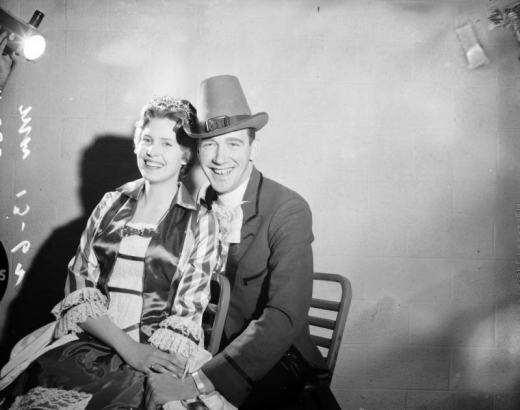 From the earliest days of the Leadville mining boom, right up until the present day, Colorado has been home to a large, vibrant community of Irish immigrants and Irish-Americans.

The most visible manifestation of the Irish in Colorado is Denver's fabled St. Patrick's Day Parade (hosted this year by WH/G friend Tom Noel) but it's hardly the only place where the Irish have left their mark on the Centennial State over the past 150 years.

As we prep for the 2015 St. Patrick's Day Parade, it's worth taking a moment to look at how the Irish came to Colorado and what they've accomplished since they arrived.

Miners and Maids: The Leadville Days

Though the Irish were present in Colorado's rural and mining areas from the 1850s, their numbers were fairly small until the 1870s. Throughout that period, Irish men and women toiled in some of the toughest work the Western Frontier had to offer. In their 2012 book, Irish Denver, authors Tom Noel and Dennis Gallagher point out that in 1870, a full 60% of Irish men in Colorado worked as common laborers, while 70% of unmarried Irish women labored as domestic servants.

When silver was discovered in Leadville in 1877, the sons and daughters of Erin headed to the hills in huge numbers. By the time the 1880 census rolled around, Lake County was home to nearly 5,000 Irish-born and Irish-Americans. Those immigrants who didn't come directly from Ireland made their way to Colorado from other mining hot spots including the Upper Peninsula of Michigan and Butte, Montana.

When they weren't at work in Leadville's mines, hotels and restaurants, these high altitude Hibernians socialized and worshipped on Leadville's East Side.

Perhaps the most unusual moment of the Irish age in Leadville came in April of 1882, when noted Irish literary figure Oscar Wilde stopped by Leadville to deliver a speech at the Tabor Opera House titled, Practical Application of the Aesthetic Theory to Exterior and Interior House Decoration, with Observations on Dress and Personal Ornament. Though this is hardly the first topic one might considering when addressing an auditorium of 19th Century miners, Wilde's speech apparently went over pretty well with the Leadville crowd.

It should be noted that Wilde did more than just lecture his countrymen on the virtues of interior decorating. He also visited the bowels of a mine where he drank with on-duty miners and distinguished himself as someone who could handle his booze, no matter where it was served.

When Leadville's mining boom petered out, the Irish community headed towards the lower mountains and plains in search of better opportunities to realize the American dream.

One Irishman who benefited mightily from the Leadville mining boom was flour-milling magnate John Kernan Mullen. Mullen, who came to Denver in 1871, was the template for the 19th Century self-made man.

Born in Ireland in 1847, Mullen and his family moved to New York when he was nine years old to escape the horrors of the Potato Famine. When he was just 14, Mullen began what would be a lifelong career working in a flour mill.

After journeying West, and learning the intricacies of grinding Western wheat, Mullen's frugal and hard-working habits put him in possession of his own flour mill operation. Mullen's keen eye for wheat markets allowed him to serve the booming demand for flour in Leadville at a time when other millwrights simply couldn't deliver the goods.

A sober and quite serious man, Mullen was not frivolous with the wealth he accumulated while speculating on, milling, and selling wheat. Over the years, he established a number of organizations that helped out his fellow Irishmen including, but not limited to, the St. Vincent Boy's Home; the St. Patrick Benevolent Society; the J.K. Mullen Home for the Aged; and J.K. Mullen High School. Mullen also helped oversee the building of several churches, including the Immaculate Conception Cathedral.

Behind Every Great (Irish) Man...

Besides his keen work ethic, Mullen had another serious advantage that helped him climb the ladder of success. Her name was Catherine Theressa Smith, who eventually became Mrs. J.K. Mullen and the heart behind his philanthropic largesse.

Smith, who was also Irish-born, hailed from a family of prosperous-but-not-wealthy merchants and was something of a self-made woman herself. After journeying from Kansas to Colorado on freight convoys with the family business, Katie settled down in Central City where she engaged in tireless philanthropic efforts.

According to William J. Convery's Mullen biography, Pride of the Rockies: The Life of Colorado's Premiere Irish Patron, John Kernan Mullen, the future Mrs. Mullen was quite active in raising funds for the area's widows, orphans and other charitable interests (this was in addition to her hands-on work with these groups).

Besides her charitable works, Smith was also a pretty sharp businesswoman and investor who amassed her own portfolio of property and investments well before she ever met Mullen. Her financial prowess, according to Convery, was not uncommon amongst Irish women of her time.

While not taking anything away from Mr. Mullen's well-deserved reputation for hard work, it's definitely worth noting that Smith and her family provided valuable access to capital that funded many of Mullen's more ambitious projects.

Mullen's Legacy to the Irish

J.K. Mullen laid a foundation for Colorado's Irish community by providing both steady employment in his mills and de facto social services for Denver's neediest citizens. His legacy lives on in the institutions he founded (including J.K. Mullen High School and Mount St. Vincent's Home for children).

By way of his achievements, he also shattered popular, and wildly misguided, prejudices against the Irish that flourished during his time. This paved the way for other notable Colorado Irish men and women to participate in civic life and help make the Centennial State into what it is today.

Sadly, Mullen's work wasn't enough on its own to beat back nativist prejudices, which survived well into the 20th Century. The most notable example of this dynamic was former Denver Mayor Benjamin Stapleton (for whom the former airport and current housing development was named).

Stapleton, who served five terms as mayor during the 1920s-1940s, was closely tied to the Ku Klux Klan and made efforts to purge Catholics and immigrants from prominent jobs. One Irish-Catholic who survived Stapleton's campaigns was Denver Fire Chief John "Jack" F. Healey.

Healey joined the DFD in 1894 and rose to Chief of the Department in 1912, a position he held until 1945. During that time he distinguished himself by serving on the fire line alongside his men, and was a well-loved figure throughout the city. No matter how hard Stapleton and his KKK cronies tried to oust Healey, he was simply too popular to dislodge.

Chief Healey's son, Jack Jr., fulfilled the immigrant dream by attending the University of Colorado, where he was a scholar, star athlete and noted thespian. Healey the younger also distinguished himself by going undercover to a KKK meeting to take down license plate numbers and identify the people hiding behind the hoods.

Though vestiges of the Irish identity remain throughout Colorado, the sons and daughters of Erin are mostly assimilated. That's no small achievement given their humble beginnings as laborers and domestic servants.

One place where the Irish identity springs back to life is an event that J.K. Mullen most certainly would not have approved of...the Annual St. Patrick's Day Parade.

(Look for Part Two of The Irish in Colorado tomorrow.)

Photo Gallery - Colorado and the Irish, a Match Made in Heaven

Who Was Denver's 'Mullen'?