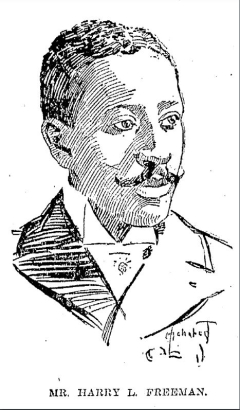 Other than this brief mention of the performance on page 5 of the February 12 issue of the Rocky Mountain News (and a subsequent reprint of the article in the Cleveland Gazette), very little is known about the performance and the opera, Ephthalia [sic]. In fact, the title of the opera is actually misspelled in the article and should be: Epthelia.

What is known is that the librettist and composer of the opera, Harry Lawrence Freeman moved to Denver, Colorado, in the fall of 1889 to be with his parents, Lemuel Freeman and Agnes Sims-Freeman.  He was born in Cleveland, Ohio, on October 9, 1869, and as a child studied piano; he began performing as a church organist around the age of twelve. At the time of his move to Denver, Freeman was the organist at the Mount Zion Congregational Church in Cleveland and also worked for the Cleveland Gazette. His profession is listed in the Denver city directories as a musician and music teacher.

According to a biographical sketch written by Freeman for the Washington Post in 1898, after his arrival in Denver, he was “devoting very little time to music of any kind.” This changed after Freeman and a friend watched Emma Juch’s performance as Princess Elizabeth in the Grand English Opera Company’s performance of Richard Wagner’s opera, Tannhäuser at the New Broadway Theatre in Denver. The opera was performed twice by the company, on March 9 and March 14, 1891.

Freeman was initially reluctant to attend the performance because he had been raised to think of opera as “low and degrading,” but the experience changed the direction of his life forever. After the performance, he was unable to sleep and woke up at four o’clock the next morning to write the music for his first song, The Creole’s Enchantment. During the remainder of 1891, he wrote another 100 ballads. Freeman himself has pointed out that the songs and his first two operas were composed without the benefit of a single lesson in composition or music theory.

The following year, 1892, was a very productive year for Freeman. He continued to compose and spent much of July 1892 performing recitals in his native Cleveland. 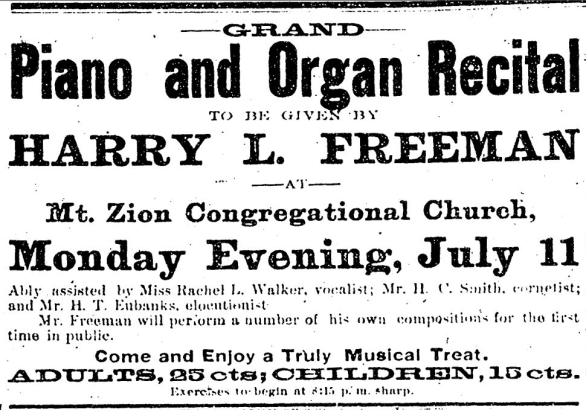 published in Cleveland Gazette, July 9, 1892, page 3
Advertisement for "Piano and Organ Recital to be given by Harry L. Freeman"

Back in Denver by August 1892, Freeman wrote and produced what is arguably his first theatrical work, the “grand Melodrama,” Faith, or the Rival Sisters at the Central Baptist Church of Denver on October 6. But, while this performance is mentioned in the Cleveland Gazette, nothing more is known about the melodrama. 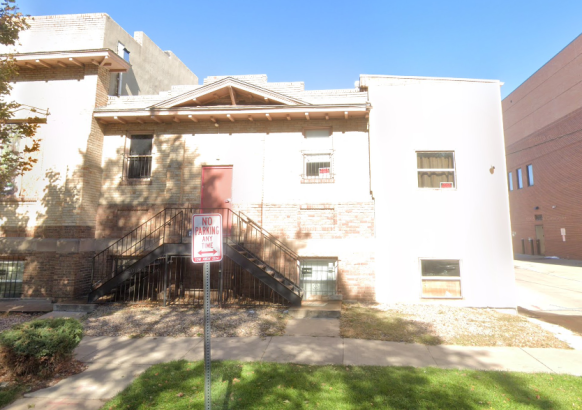 Today, the Central Baptist Church encompasses a half city block on California Street between 24th and 25th Streets. The original Central Baptist Church was probably located at about 625/623 24th Street and is currently “sandwiched” between two other additions/buildings as part of the church complex. In the photo above, the structure in the middle is the probable site of the performance of Freeman’s first theatrical production, Faith, or the Rival Sisters.

Harry Lawrence Freeman himself also performed during this time as a baritone singing in vaudeville-style acts in the “Little Sara’s Benefit” program given at the East Turner Hall on December 15, 1892. Within roughly three months, Freeman would produce his first opera, Ephthelia in the same theater.

In 1898, Freeman wrote that he began composing his first opera, Epthelia, on December 10, 1892, and completed the pencil sketch a month later on January 10, 1892. He characterized the opera as a “romantic work in three acts performed by 60 people.” While no information is given about the content of the opera, it is possible the word Epthelia may reference a Turkish word for "mermaid.” Except for the premiere of the opera on February 9, 1893, at the East Denver Turnverein theater, the only other known performance is a presentation of the opera’s overture in Cleveland on April 11, 1894. The opera’s score has also been lost and is not found in Freeman’s papers at Columbia University in New York City.

Freeman began work on his second opera on August 2, 1893. The opera, Platonus premiered at the East Denver Turnverein theater on August 16, 1893. Platonus was more enduring than Epthelia and Freeman later characterized this work as his first “grand opera.” Subsequently retitled The Martyr (and subtitled “a sacred opera”), it was set in ancient Egypt in the early days of Judaism and concerned an Egyptian nobleman put to death for accepting the religion of Jehovah. The opera’s exotic subject matter, its lofty, faux-antique libretto, and a Romantic score would set the mold for many of the approximately twenty operas Freeman composed over the next half-century. Platonus was next performed in Chicago on October 17, 1893, and in Cleveland in 1894. It continued to be performed, with some revision, as late as the 1940s.

The location of the performances for both of Freeman’s Denver operas, Epthelia and Platonus were at the East Denver Turnverein. The East Denver Turnverein was located roughly five city blocks from the Central Baptist Church, between 21st and 22nd Streets on Arapahoe Street. At that time, it was the closest theater to the Five Points neighborhood of Denver. 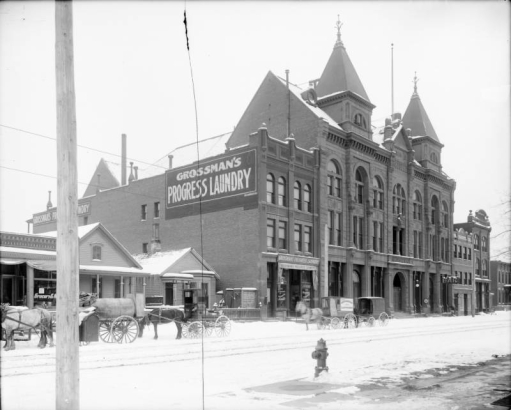 Built in 1889/1890, the building contained a large theater/ballroom that could accommodate 860 patrons on the main floor with more seating in the gallery. The stage that was approximately 30 feet deep by 69 feet long and the facility was well equipped and comparable to other similar theaters in Denver. The Turnverein was a German-American social and athletic association based on the ideas of German educator, Friedrich Ludwig Jahn. 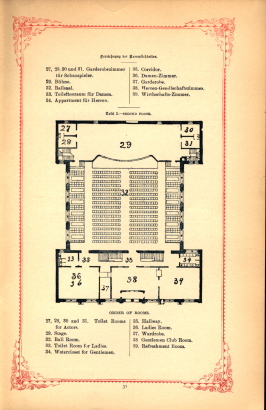 Sometime in late 1893 Freeman returned to Cleveland and with a new sense of purpose began studies in music composition with Johann Heinrich Beck (1856–1924), founder of the Cleveland Symphony Orchestra. Freeman also married a soprano from Charleston, South Carolina, Charlotte Loise Thomas in 1896. The couple’s only child, Valdo, was born two years later. During the same year, the Cleveland Orchestra gave readings of excerpts from Freeman's operas.

Freeman and his family lived in Cleveland, Chicago, and Xenia, Ohio, for the next ten years while Freeman was director of the music program at Wilberforce University (1902-1903). During this time, both Freeman and his wife also worked at the newly-formed Pekin Theatre in Chicago. The theatre was the first of its kind to be entirely run by and performed in by African Americans.

The Freeman family then moved to the Harlem neighborhood of New York City in about 1908. By 1920, Freeman opened his Salem School of Music on 133rd Street in Harlem. The school was later renamed the Freeman School of Music. At the same time, he founded the Negro Grand Opera Company. The company would go on to produce several of Freeman’s operas with his wife and his son, a baritone, singing principal roles in many of the company's productions.

Freeman’s best-known opera, Voodoo (1928) focuses on the voodoo cult in Louisiana with a score that combines themes from spirituals, Southern melodies, jazz, and traditional Italian opera. While Freeman finished composing the opera in 1914, it was not produced until fourteen years later. The opera had an all-Black cast and premiered at the Palm Garden Theater on September 10, 1928. It was the first opera by an African American composer to be presented on Broadway. The opera is also one of the earliest American compositions to be performed on the radio, when it was broadcast live on New York radio station WGBS on May 20, 1928.

Harry Lawrence Freeman died of a heart ailment at his home in New York City on March 24, 1954. During the last decades of his life, Freeman was frustrated and struggling to have performances of his work produced. At the time of his death, almost all of his music was unpublished. Currently, no recordings of his work have ever been released commercially. His papers are held in the H. Lawrence Freeman papers collection at Columbia University.

The question today is whether any ephemera or documentation still exists related to the operas Epthelia and Platonus, composed and premiered in Denver at the East Denver Turnverein in February and August 1893.

Specifics about Freeman and the Denver performances and information on the opera company would likely have been reported in the Statesman, a weekly paper printed in Denver that served the African American community in Colorado, Wyoming, Montana, Utah, and New Mexico. Unfortunately, even though the Statesman began publication in 1888, issues of the newspaper from the early 1890s are unavailable and probably no longer exist.

Most certainly, posters advertising the 1893 performances and programs for the audience would have been printed, and photographs were probably taken to record the event. However, we have found no documentation other than the brief mention in the Rocky Mountain News for Epthelia and information from the Cleveland Gazette for both operas.

Any physical material directly related to the performances has not been found. Perhaps you can help to locate any of this material?