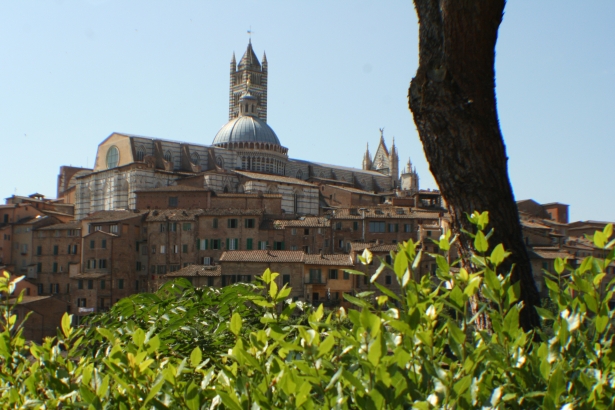 Our next stop on the Forever Italy tour was a day in Siena. Being one of Europe's most well-preserved medieval cities, Siena boasts 14 towers dating to the 13th century. Buildings and streets consist of a seemingly haphazard mixture of styles, materials, and angles.

After navigating countless streets and alleys, and taking five public escalators up, we reached the Piazza del Campo, site of the Palio horse race. Every year, competitors in the fierce race represent one of the seventeen neighborhoods - or contrades - that make up Siena. Each neighborhood has a symbol and territories are marked with painted wooden signs: Eagle, Snail, Wave, Panther, Forest, Tortoise, Owl, Unicorn, Shell, Tower, Ram, Caterpillar, Dragon, Giraffe, Porcupine, She-Wolf, and Goose. The intersection of Unicorn, Dragon, and Goose left me feeling like I'd walked into a Harry Potter novel.

Upon arriving in the piazza, we chose one of the many cafe patios and sat for a plate of cantaloupe, meats and cheeses. Accompanied by a refreshing glass of local white wine, of course.

That night, back in Chianciano Terme, our home base at the time, we were treated to a marvelous dinner featuring homemade pasta, a pizza-like treat, locally raised beef, and - you guessed it - more local wine. While we dined, we were able to watch an example of how the pasta we were eating had been made. Even though our hosts made it look so easy, given there were about 125 of us it must have taken them all day. I can guarantee though, the effort was well worth it and was absolutely appreciated.

Dinner was followed by a dessert of Vin Santo. Holy Wine. Crafted by monks, the recipe for the particular wine we were served is a secret. Very sweet and almost syrupy, the Holy Wine was deliciously paired with biscotti.

Having ended our day on a perfect note, we headed back to the hotel in preparation for the next day and the part of the trip I had been looking forward to the most: climbing Mt. Belvedere.