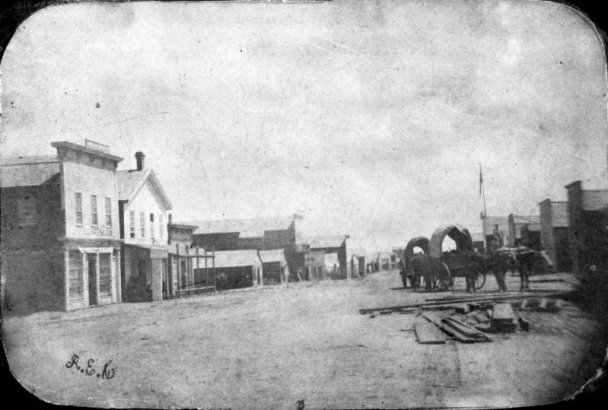 "Is this the first picture ever taken of Denver?" That was the question a customer recently asked about the picture at the top of this article.

The picture, which is housed in our Digital Collections (X-22056) under the title, Larimer St. Denver City looking north east, does appear to be an extremely early Denver photo right down to the teams of oxen parked in front of rough hewn, false front saloons.

But is it the first photo of Denver?

How would a researcher, or anyone else be able to tell?

Fortunately for us, the picture itself is loaded with clues, and the Western History and Genealogy Department has the resources to help uncover the mysteries contained in this fascinating photo.

One of the first clues is the initials "R.E.C.,"  which are inscribed in the lower left hand corner of the photo. The photo cataloger who originally described the picture identified the man behind those initials as Rufus E. Cable. Although we have great confidence in our catalogers, this is an occasion where additional research is warranted. One of the best resources for researching Denver's early days is Jerome Smiley's seminal 1901 work, History of Denver. The 1970 edition of Smiley's book also contains a detailed, though not comprehensive, index that is a gold mine for anyone looking to find the names of early Denver residents. Cable does not, however, appear in Smiley's.

The next stop on our research investigation is the Western History Subject Index. This resource started out as a Works Progress Administration (WPA) project aimed at creating an every-name index of the Rocky Mountain News (RMN). Once the WPA was done with their work, our WHG volunteers took over the project and updated it well into the 1990s. Since the RMN began its run in 1859, when Denver was barely a year old, this is an excellent resource for determining if Rufus E. Cable lived in or visited Denver - and what he may have done while he was here. 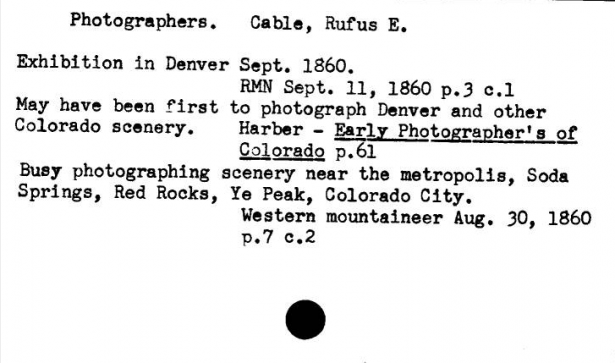 Right away, the Western History Subject Index yields pay dirt with two very interesting entries. The first is a card (pictured above) under the heading, Photographers. Cable, Rufus E.,  that refers to a September 11, 1860, RMN article intriguingly titled, "Exhibition in Denver, September, 1860." Another tantalizing entry reads, "May have been the first to photograph Denver and other Colorado scenery" and also points to published work titled, Early Photographers of Colorado.

Fortunately, the Western History and Genealogy Department has both a full run of the RMN on microfilm as well as a copy of Early Photographers of Colorado, which is an unpublished Denver University Masters thesis written by Opal Murray Harber in 1956.

Just as the card in the Western History Subject Index indicated, there is a small article about Cable and a photo exhibit in that issue of the Rocky Mountain News. We've got a copy of it below, and if you'd like to read the whole paper from that day, our colleagues at HistoricColoradoNewspapers.org have digitized that entire issue.

This tidbit of information is useful because it puts Mr. Cable in Denver City in 1860, when the town was just a little more than a year old. (Denver wouldn't officially become Denver in 1902.) It also establishes Cable as a photographer, but it really doesn't get us closer to determining whether or not the photo in question is the first photo of Denver.

Since we've established Cable as an early Colorado photographer, it's likely that there's more information about him in the aptly titled, Early Photographers of Colorado, which seems to be the source of the claim that Cable's photos were Denver's first. On page 61, just like the Subject Index indicated, is the phrase that set out the question in the first place.

"During August, 1860, Cable was making paper photographs of the environs of Colorado City -- perhaps, he was the first to make actual photographs of Denver and other scenic sports in Colorado."

A closer reading of that sentence makes one wonder if there wasn't a slight typographic error in the work that should have read something like, "...perhaps he was the first to make actual photographs of Denver and other scenic spots in Colorado?" Regardless, this is far from an attributable fact - it's speculation. That said, it is speculation that's based on some pretty significant, and well-footnoted, facts.

Early Photographers of Colorado, it turns out, is loaded with information about Cable and his early photographic efforts in Denver.

Even better, Harber's work proves that Cable was in the area as early as December 1858, two years before the picture was (possibly) taken. Harber points out that Cable's name appears on a list of people who qualified for two lots in Denver City if they could put up a 16"x16" cabin before March of 1859. She cites original records of the Denver City Town Co. as her source.

Harber even names the two people who purchased those lots and cabins from Cable. (It's worth noting that a Denver City pioneer could claim a plot as his own by constructing the outline of a cabin without actually building a proper structure.)

We were able to confirm this fact using Henrietta Bromwell's copiously footnoted, and massively titled, Fiftyniners' directory : Colorado argonauts of 1858-1859 : A directory of their arrivals, removals, deaths, marriages, children, property, mines, ranches; with names of old towns, mining camps, gulches, mountains, rivers, creeks, and other matters relating to the settling of their lives in the Pike's Peak region. On page 49 she describes Cable's sale of a lot on the northeast corner of D (which is now 13th Street) and Arapahoe Streets for $50 to a Sylvester Hall of Pitts County, Missouri. Bromwell also cites Arapahoe County Land Records as her source. 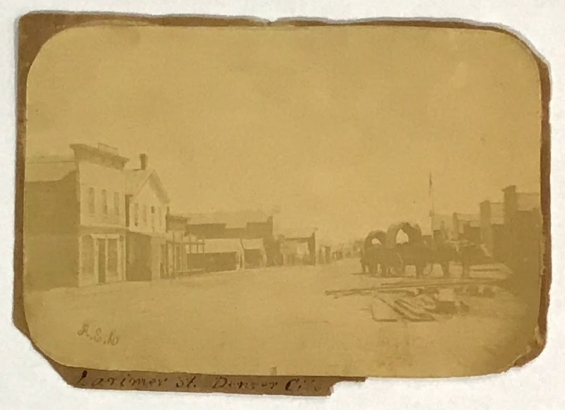 "Another rare photograph, however, quite possibly Cable's, has been preserved and has recently been acquired by the Western History Department of the Denver Public Library. This old print is a view of early Denver looking east from Cherry Creek along Larimer street, with Apollo Hall and the building on each side of it standing out quite clear. The initials R.E.C. appear in one corner of the picture, and Rufus E. Cable was the only photographer know to be in Denver during those early years with a name to fit the initials."

DPL has this Cable image of early Denver (along with a smattering of his photos of Gilpin County mining operations) in our collection, but what about the rest of them? Harber asks the same question, and we'd also ask what happened to the pictures of Denver taken by Cable's partner from his Denver gallery, Mr. Brecker (or possibly Bricker) who disappears from the historical record shortly after the 1860 RMN article. They may exist somewhere, in a family scrapbook or a forgotten chest, but if they do still exist, they're not available to researchers.

So What Does It All Mean?

All this research takes us back to the original question: Is this the first picture ever taken of Denver?

The answer, unfortunately, cannot be definite. Definitive answers are frequently hard to suss out of the historical record, no matter how robust your resources are.

That said, the resources at the Western History and Genealogy Department establish pretty clearly that the photo was taken by Rufus E. Cable, who was in what would become Denver as early as 1858 and was, in fact, a photographer, who had a small gallery/exhibit space on Larimer Street in September of 1860, when Denver City was less than a year old. We've established that Cable definitely took photos of early Denver and that, likely, none of them except, Larimer St. Denver City looking north east survive in the public sphere.

We can't really say with any authority that this is the first photo of Denver. After all, Cable likely took other photos that haven't survived, and we have no way of knowing in what order they were taken. We would, however, feel very comfortable saying that this the earliest-known-photo of Denver, and if someone has one that they think is older, we'd love to see it (and we'd really love to add it to our collection!).

A Word About Original Copies

The Western History and Genealogy Department has a vast collection of historical materials, including original newspapers and photographs, some of which were used in researching this blog. Some of these items, including the original copies of the RMN and of Cable's photos, are extremely delicate and are not available to the public. Copies of these items, in the form of microfilmed newspapers and digital files, are available to the public any time the library is open.

And a special thanks to Phil Goodstein for assistance in editing this article.

It includes a photo attributed to the "early 1860s," showing the Rocky Mountain News and Tremont House.

If you're interested, Sandra Dallas also included a "lantern-slide" of General Larimer standing in front of his cabin (no date) in her 1967 book called "Gold & Gothic."

It also includes a neat engraving of Larimer and Blake Street from 1859.

Keep up the good work!

Hi Chip - Thanks for pointing that out. I wonder if that photo is one that was on display in the exhibit mentioned in the Rocky Mountain News?

Thank you for the kind words. They are greatly appreciated.

Nice work, Brian! I'd like to think that it is the first photo. Thanks for the great read.

Thanks Frank, it was quite an interesting story to research and we're pretty lucky to have those resources right at our fingertips here at DPL.

Thanks for the outstanding research on an obscure and difficult subject to detail.

Thank you, Thomas. Our collection does most of the heavy lifting on these things!

Great article! Sleuthing is great fun. I've done it for my great grandfather, Frank Gonner, an early Durango photographer, 1889. But in 1888, my great great great grandfather leased Asa Wilder's gallery there, setting up with his photographic partner, Anson Corey, both from Missouri. There are no known 100% identifiable photos created by these two men in Durango, but one of the first known by their three-man partnership was done in July 1889 after the fire burned part of the town. No one knows for certain which man took the photo, as the three were in town when it happened. I only half-remember what my grandmother told me. I wish I had paid attention.

Thanks for sharing that with us, Kathy. I think a lot of share those same thoughts about the conversations we had with our grandparents.