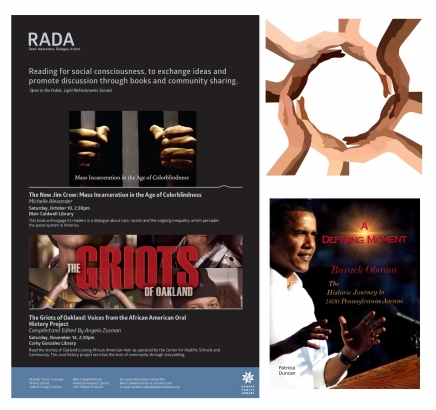 Race Matters: An Intercultural Dialogue of an Artificial Construct and Exhibition

The exhibit will feature artists from the local community showcasing work that explores both the intersection of “race” and the connectedness of people as it overlaps and illustrates our shared humanity. We use the word “race” to describe color, ethnicity, and culture, when in reality it’s our shared humanity that unites us as one. The show will offer artists an opportunity to explore their own feelings about race, cross over to a new expression of their art and deconstruct the whole concept of “race.”

The Denver Public Library’s newest book group, R.A.D.A., will be gathering to discuss with like-minded individuals interested in reading for social consciousness, willing to exchange ideas, and promote discussion through books and community sharing. Open to the public. Light Refreshments Served.

Saturday, October 10, 2:30 p.m.
Blair-Caldwell Branch Library
Selected Book, The New Jim Crow: Mass Incarceration in the Age of Colorblindness by Michelle Alexander
This book will engage its readers in a dialogue about race, racism and the ongoing inequality which pervades the penal system in America.

Upcoming Book Selection:
Saturday, November 14, 2:30 p.m.
Rodolfo “Corky” Gonzales Branch Library
The Griots of Oakland: Voices from the African American Oral History Project compiled and edited By Angela Zusman
Read the stories of Oakland's young African-American men as captured by the Center for Healthy Schools and Community. An oral history project that will enrich the lives of community through storytelling.

Author will be selling copies of her book. Light Refreshments served.

Bio:
Patricia (Pat) Duncan was born and raised in Denver, Colorado and impresses everyone from childhood friends to business associates, with her passion and commitment to her dreams. Her first dream to be fulfilled was becoming a flight attendant with Braniff International Airways, for six wonder years.

Pat is Chief Executive Officer and President of IJABA Event Planning and IJABA Publishing Inc. "IJABA" means A Wish Fulfilled. As most entrepreneurs are aware, the establishment of a new business is a daunting task. Pat embraced the advice of her deceased sister twice elected Vikki Buckley, Colorado’s first African American Secretary of State: “If you have a dream and a goal, you must go after it! Stay focused; accept the good with the bad. You may get knocked back two steps before you can take one step forward, but don't quit! If you work hard and keep God first in your life, you will preserve."

Pat wanted to start documenting her events and decided to purchase a digital camera. She took her camera with her to every event. It wasn’t long before she realized she had the passion and others felt that she had a talent for photography. Having a mentor with her every step of the way, she moved from the ranks of being an amateur photographer to an award winning professional photographer. After many hours of thought, Pat decided to publish a coffee table book on President Barack Obama’s journey to the White House with a Colorado flavor. A Defining Moment-Barack Obama-The Historic Journey to 1600 Pennsylvania Avenue was nominated for the 43rd NAACP Image Awards in the category of Outstanding Literary Work of a Debut Author in 2012 and placed in the Library of Congress, June, 2013. Pat is married to a captain on the Denver Fire Department and she has two grown daughters.

Slam NUBA Presents: Poetry & Pancakes
Saturday, October 31, 1:30 p.m.
Poetry & Pancakes is a monthly writing workshop open to all ages. Each program is coordinated by the award-winning and Denver-based literary organization Slam NUBA all to the tune of a wonderful breakfast.

Slam NUBA is a nationally recognized award-winning organization that focuses on literacy, mentorship and competitive based poetry. The mission of Slam NUBA is to promote the creation and performance of poetry, by cultivating literacy activities and engaging the community, fixated on the power of the written and spoken word in Denver, Colorado.

For more information contact the Blair-Caldwell Branch Library at (720) 865-2401 or email askblaircaldwell@denverlibrary.org

Engage programming is adult and family programming located at branch libraries throughout the city of Denver. These programs include crafting, music, history, authors and more. All of our events can be found on the Denver Public Library events calendar and our programming brochure (which are distributed to all of our branch locations).

For more Engage events, please check out the online Engage calendar or the upcoming programming brochure.

You know, I’ve study loads of numerous writings, testimonials along the lines of usingLeatha, and posts by a number of people in relation to %BT% even so this
blogging site is one among the my favorites. Many thanks!