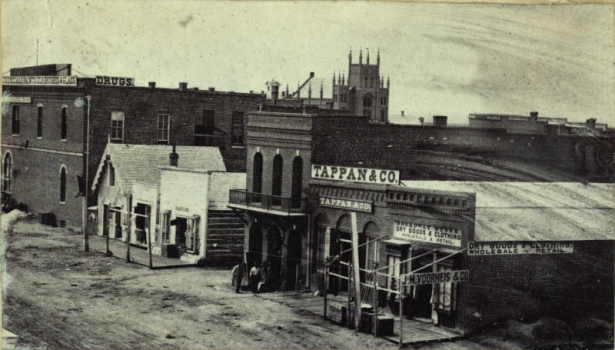 The City of Denver is known for its bone-dry climate as is evidenced by the chorus of, "We could sure use the moisture," that accompanies the slightest hint of rain or snow anywhere in the state. While the near-total lack of humidity has its benefits, it also harbors a recipe for disaster, as the Great Fire of 1863 illustrated all too well.

According to historian Jerome Smiley, "The spring of 1863 was a dry one in this region and high winds were almost daily visitors." In a town comprised almost entirely of wood frame buildings, on the morning of April 19, disaster struck Downtown Denver in a major way.

Sometime between 2 and 3 a.m., a small fire broke out in the rear of the Cherokee House, an entertainment establishment on the southwest corner of Fifteenth and Blake. Fueled by a strong wind and an abundance of wood buildings, the small fire very quickly turned into a huge fire. Within three hours, almost every building in the downtown area was completely devastated, despite an all-hands-on-deck effort by "every able-bodied man" in Denver. Although the Denver Fire Department wouldn't be officially established until 1866, the City had authorized the formation of one hook and ladder company and two bucket companies to fight fires in 1862.

According to Smiley, nearly the entire area between, "Sixteenth, Market and Wazee Streets and Cherry Creek" was almost completely devastated, though a few buildings did actually survive the inferno. On the other side of Cherry Creek, the town of Auraria was spared entirely.

Shortly after the fire, a list was published containing the names of 64 people and businesses who had suffered losses of anywhere between $200 and $20,000. (By way of comparison, $1 in 1863 had the buying power of $20 today.) Almost none of the property owners carried insurance, which was prohibitively expensive in the Colorado Territory.

That said, no one was spared from the impact of the fire as prices doubled overnight for nearly every item that could be purchased in a store.

Surprisingly, many property owners began rebuilding right away, and it wasn't long before Denver's downtown was back up and running. There was, however, one significant difference, as is illustrated in the picture above (X-19265). They rebuilt with brick which resisted fire better and, according to Smiley, "gave the town a far more presentable aspect than it had before 'the Great Fire.'" It was also mandated by law that nearly every building in Denver should be built with bricks.

Denver would go on to suffer multiple natural and man-made disasters, but few would hit the city with the impact of the "Great Fire of 1863." And none would end the legacy of brick buildings that define the Denver of today.