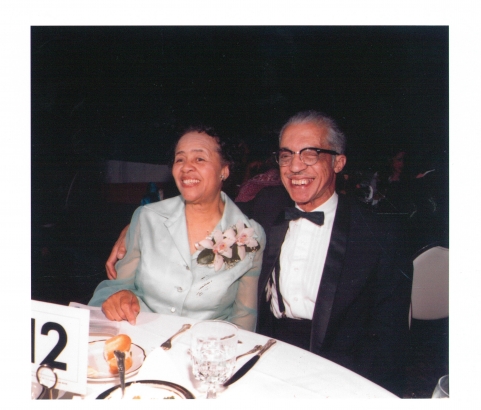 Dorothy Ann Witt King, was a community service and civil rights activist who took action to right a wrong.  She lived to be 100 years old.  Seventy years of her life was spent advocating for economic opportunity and education for African Americans in Denver.

King was born on January 26, 1913, in Cheyenne, Wyoming. Her father was a machinist with the Union Pacific Railroad for 40 years, and her mother was a homemaker, who ran a profitable catering business. Her father was also a Buffalo Soldier.

She attended primary and secondary schools in Cheyenne. She was a student at Howard University in Washington, D.C., for one year where she studied African American history. She relocated to Chicago and attended Roosevelt University. While at Roosevelt, she got a job with the Chicago Urban League. She referred to her work with the Chicago Urban League as an excellent learning experience that taught her how to work within race-related situations.

King would often accompany her mother on shopping trips to Denver, where she met Frank King, who became her husband. Mr. King was born and raised in Denver.  He was the first African American to attend the School of Engineering at the University of Colorado. Frank King had a lengthy career as a civil engineering draftsman for the City and County of Denver. The Kings moved to Denver in the 1950's.

Dorothy King’s legacy includes her work with girls at the Denver Parks and Recreation and the Whittier Recreation Center.  At Whittier, she helped to create the CANTEEN, a place where girls could dance, have fun, and learn. She developed SHOWAGON, a traveling talent show that made its rounds in Denver parks throughout the summer.

She brought to life The Silhouettes in Black History that featured performers portraying activists, scientists, cowboys, and famous African American leaders. She insisted that The Silhouettes be presented at segregated elementary schools and neighborhoods throughout Denver.

She gained business acumen as the first African American manager of the University of Colorado Denver bookstore.  She experienced opposition to becoming manager when a male employee told her he "had no intentions of" her being the manager of the bookstore. She successfully managed the bookstore for 17 years.

King’s unfamiliar legacy is the creation of Personal Services, Inc., in the 1970s, with a $500 loan from a bank.  Personal Services was a laundry and custom ironing service in the Denver area that employed women who had limited skills and income. The women could set their own work hours, and the work kept them off public assistance programs.

President Jimmy Carter presented Mrs. King with the Historian Award for producing the first documentary on African-American history in the West.

“A celebration of family,” by Joanne Davidson, The Denver Post Staff reports, May 13, 2007.

My goodness, what a woman. Living so long, doing so much for our community.

I agree, and thank you for your comments.